MoreHaze! is a declicious, juicy, NE style double IPA.  This beer was brewed as a collaboration between EJ Phair Brewing Co. and MoreBeer!  We liked the beer so much that we wanted people to be able to brew it at home.

The beer is very high in alcohol (9.5% ABV), low in bitterness, light in color and loaded with hops.  We dry hopped this beer in multiple stages, added lots of high protein grains and did not use any clarifying agents, which leads to a hazy beer loaded with flavor.  Flavor and aroma is very citrusy (orange, tangerine, grapefruit) and mildly danky.  The large addition of wheat and oats adds a soft, pillowy texture to the beer.  The feed back was that this beer is delicious and dangerously easy to drink at such a high ABV.

Check this out- https://www.morebeer.com/content/yeast_pitch_calculator
0
BEST ANSWER: For any recipe that has an estimated abv of over 6% we recommend using a yeast starter or two packets of yeast.

Check this out- https://www.morebeer.com/content/yeast_pitch_calculator
Vote for the best answer above!

Reviews
Powered by TurnTo
Review More Purchases | My Posts
4.4 / 5.0
24 Reviews
5 Stars
4 Stars
3 Stars
2 Stars
1 Star
14
7
1
2
0
Almost perfect.
Since Haze Craze has been my favorite recipe for quite some time, I was excited to try the Double IPA version, MoreHaze. After looking at the recipe I noticed immediately the copious amounts of Simcoe in this one. A little leery of too much pine, I eliminated the drop hop addition of Simcoe to secoonday. That was a good decision. There are still plenty of pine notes in this recipe. Maybe still a little too much. I love the citrus and fruit to come through as prominent. A little Simcoe is fine but it needs to be tamed. I'd give this recipe 5 stars if the Simcoe was dropped to .5 oz in primary and eliminated from secondary.
January 22, 2020
R F
Purchased
3 months ago
Outstanding flavorset!
There are so many types of hops, and through dry-hopping the different flavors of flowery hops was one of the best I have ever had. I will be doing this one again and again. Thanks!
October 26, 2019
Chris M
Purchased
1 year ago
So far so good!
Everything is good so far! We will see in a few weeks! 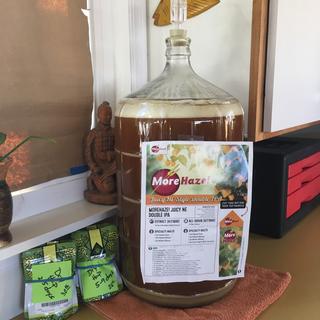 Day 5, Dry hopping going good!
September 27, 2019
William R
Purchased
6 months ago
Hoppy goodness!
Note to self... always read the directions all the way through before you start.... getting ready to keg this hop monster and expect it will be fine but I missed a few targets in the dry hop schedule...
September 14, 2019
John M
Purchased
7 months ago
This is the best NEIPA kit on the market for extract brewers IMO. 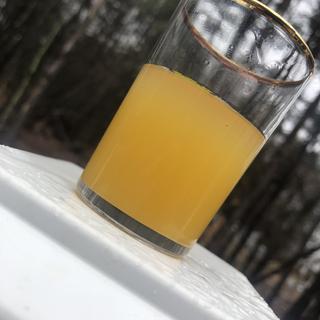 Added Apr 13, 2019
April 13, 2019
Thomas B
Purchased
1 year ago
Fell short of expectations
Well short of target OG (1.073 compensated). First of well over 100 Morebeer kits to miss the mark. Most expensive kit - expected much more.
January 20, 2019
Brent Carlson
Superb! Super easy and incredibly delicious.
On a recent vacation to Vancouver, BC enjoyed many delicious brews. My favorite was a hazy citrusy NE IPA. Though mostly an all grain home brewer, opted for the Extract beer kit. Made a yeast starter, followed the ridiculously simple directions, and replicated a stunning beer. Grapefruit tones abound backed by a hazy malty sweet backbone that amazes all who have sampled it. This one will not last long. Carbonated to perfection in 24 hours using the carbonation lid available on this site.
December 30, 2018
Jose P
Purchased
1 year ago
Holy hops Batman!
This beer was AMAZING! Finished fermenting in 10 days, kegged it, and forced carbonated it for 2 weeks. The aroma is of hops, citrus and godlike power. More hoppy than Bugs Bunny and stronger that BEAR-cules (hercules? anybody?). This is far and away my favorite beer! I will not only recommend it to all my brewing buddies but I'll let them try it so they know the truth first hand.

I used the the Korney keg jumper line (KEG575) to transfer from the keg I used to do my second round of dry hops to my primary serving keg and it was amazing, no oxygenation of the beer or loss of flavors.

Yeast used for this was London Ale III (WY1318) also highly recommended.
December 30, 2018
Joshua Treas
Purchased
1 year ago
Response from MoreFlavor
Thank you so much for your feedback. We really appreciate the honesty and value great feedback like this as it helps us improve our products. Cheers!
December 31, 2018
Zach R Staff
Good Brew
Very nice kit. Easy to make. Very forgiving recipe. Use a higher end yeast (it gives you a better beer....duh). This beer does benefit from a second fermentation (due to settling of hops and yeast). Brewed this in glass carboys, if you use plastic buckets be aware that there are a lot of biologicals (hops) that might find their way into scratches in your buckets and create "skunk" brew in your next batch. Beer tastes great, great HAZY color and texture, nice alcohol content, without a "boozy" taste. This brew is definitely in the top 20% of beer I have made. I recommend it Highly!
September 14, 2018
James R
Purchased
1 year ago
Outstanding
This is absolutely my favorite brew I’ve made so far. I absolutely recommend making this outstanding nectar of the gods.
August 22, 2018
blair t
Purchased
1 year ago
Yum
This was my first ever homebrew. I missed the mark on the OG (1.075) I assume because I couldn't get all the LME out of the two bags. I pitched two packs of gigayeast and about 15 hours later it took off. Dry hopped as scheduled and left them in. Airlock activity was done by day 4 which worried me a bit. Day 11 I took a gravity reading. It was 1.009 (8.7% abv). I cold crashed in my SS brew bucket and transferred to a keg on day 12. I force carbed and starting drinking on day 13. It was delicious and dangerously smooth. 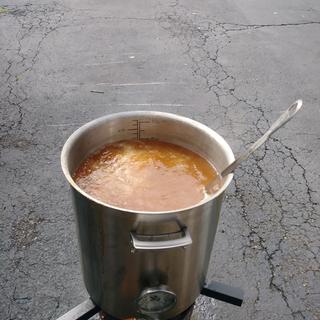 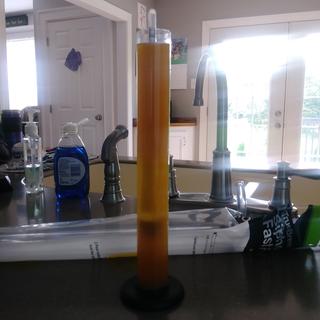 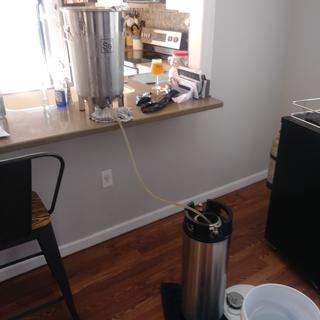 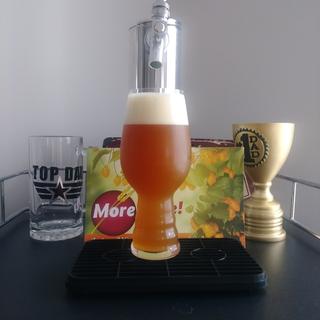 August 17, 2018
John Coughlin
Purchased
1 year ago
Response from MoreFlavor
Nice!
August 20, 2018
Zach R Staff
A Really Good Beer
I love NEIPAs and was excited to make this one. The flavor is fantastic with some strong hop flavors and aromas but less bitter than most other IPAs.
The cons, it tended to be darker than I would have wanted but no biggie. NEIPAs are traditionally cloudy and this one was very cloudy, this is due to all the dry hopping. I did use muslin bags to add the hops but there was still a tremendous amount of trub. I felt I lost a significant amount of beer to the huge amount of trub in the bottom of my carboy.
Overall, I love the beer. I am glad I made it but I think I will be trying my hand at a different NEIPA recipe soon.
July 16, 2018
Christopher Howe
Purchased
1 year ago
Response from MoreFlavor
Great review. New England IPAs are definitely a practice of inefficiency.
July 31, 2018
Zach R Staff
Not right
Not sure I got exactly what I was suppose to. There beer turned out an amber color. I followed the recipe exactly. My first thought when I opened one was it was oxidized, but from the time I poured the extract in the wort was always this color.
July 13, 2018
Maherold02
Response from MoreFlavor
Hey so sorry about your experience. We try very hard to create the best experience for our customers and provide quality products. Please give us a call at 1-800-600-0033 or email us at info@moreflavor.com so that we can assist you. We are here to help. Cheers!
July 16, 2018
Zach R Staff
Juice Bomb!
First time home brewing and this on has got me hooked! This NE DIPA has one of the best noses on it that i have ever smelled. The hop aromatic profile was on point. The flavor was a bit more muted. Has a soft mouthfeel. I may just buy this one again just to mess around with the dry hopping to see how much it changes the flavor profile. 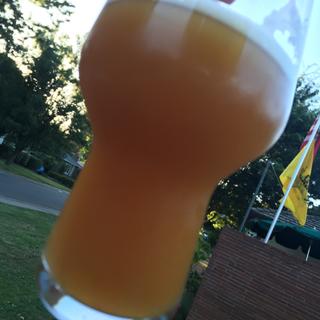 Poor lighting due to time of day but has a bright orange color.
June 27, 2018
Josh Young
Purchased
1 year ago
I really liked the beer although it came out much darker than the picture shows. 9.4% ABV.
June 7, 2018
Jim G
Purchased
1 year ago
If you like juicy NEPIA's, great kit
This is my 3rd homebrew to date, and the whole process went off without a hitch. It's awesome to brew a beer that I find incredibly tasty, and everyone else who tries it feels the same: "*You* brewed this?!" ;)
My OG came in significantly lower than what was posted (1.083-1.086): 1.075. Maybe I didn't get enough of the extract out of the bag? (I even warmed it first). This was also my first time using a yeast starter (with GigaYeast Double Pitch - GY054 Vermont IPA Yeast), and I think that helped get the FG down to 1.012 =8.27% ABV, with a calculated 84% attenuation, not at all bad.
It's super floral, super juicy, makes me think of orange juice. Bitter is on the low end, which is great for my tastes, but them smells and flavors are all over the place.
Obviously this leaves a ton of hop-trub in the fermenter: I use a conical FastFerment, and this was the first time I had to siphon out of that to a bottle bucket: The collection ball&valve would just get too clogged up with the stuff to be used effectively.
But at the end of the day, it turned out great, highly recommended if you'er into this type of beer.
May 29, 2018
Eric Pavey
Purchased
1 year ago
This beer is next level amazing!
So much so that even with 12 taps this is my go to pour. I’m on my 5th batch of this awesome in a glass in under three months. First time brewing I did a single kit....next two times did 10 gallon batches so there is always a keg of it available to drink. I always double pitch London ale 3 wyeast. And two times added an additional 1 ounce of citra and 1ounce of mosaic CRYO hops as a last dry hop addition. These are dropped right to the unitanks, as I can dump them before kegging.

If your on the fence and like IPAs this should be your first NEIPA. Click the buy button and prepare to be amazed with the results. 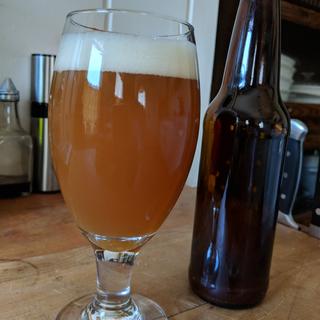 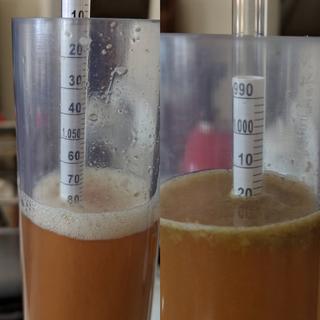 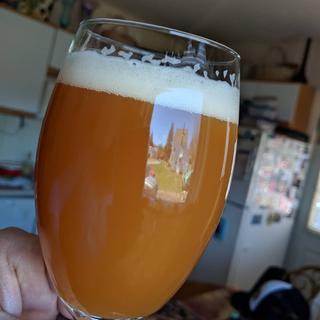 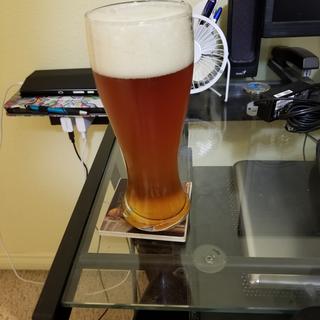 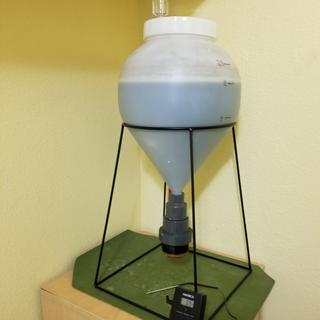 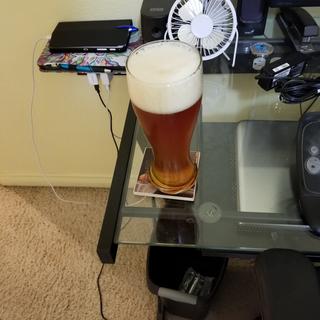 January 30, 2018
Chuck Edenburn
Purchased
over 2 years ago
This one is a keeper!
The Aroma of the hops while it was dry hoping was awesome. I used a grain bag for the hops but didn't get the orange color or the haze. Mine came out more of a copper color, but it was still awesome. Next time I'm throwing the hops directly into the fermenter.
January 18, 2018
Chris Padilla
Purchased
over 2 years ago
SMELLS AMAZING
just kegged this beer and it smells like a citrusy tropical juice, one of the best smells ive ever smelled from an IPA, i dry hopped in muslin bags so mines not very hazy, but the color is consistent with orange juice.. cant wait till this batch cold crashed so i can start to force carbonate
January 4, 2018
anthony preservati
Purchased
over 2 years ago