One of the most important aspects of homebrewing is keeping your brewing equipment clean and sanitized, and there is no better way to do that than with our line of cleaners, sanitizers, and cleaning equipment. Let MoreBeer! help you maintain your home brewery, so you can brew the best beer possible!

Important: Only Clean Surfaces Can Be Sanitized!
Most sanitizers are not good cleaners so in order to sanitize effectively we recommend that you first clean the equipment using a cleaner like Five Star PBW, Craft Meister Alkaline Brewery Wash, or Craft Meister Oxygen Brewery Wash and then sanitize using a product such as Star San or Iodophor.
For cleaning beer lines we recommend BLC Beer Line Cleaner or LLC Liquid Line Cleaner.
Want to learn More! about Sanitization? Click, here to read our article on the subject.
Displaying 1 to 41 of 41 products
Order By:
Page: [1]

Methods of Sanitization and Sterilization

Heat, especially moist heat, can effectively inactivate most microorganisms and can do so relatively rapidly. A temperature of 175 °F (80 °C) for 5–10 min, for example, will destroy all active bacteria, yeast, and fungi. Cells in their dormant phase (spores) are more resistant to heat, and temperatures above 240 °F (116 °C) must be used to inactivate them. One of the most worrisome heat-resistant spores is that of the bacteria that causes food poisoning or botulism. This is not a common household bacteria and has presented no problems for home brewers.

For most home brewing purposes, boiling in water for 20–60 min (approximately 212 °F [100 °C]) is sufficient to sterilize liquids such as wort for brewing and starters and solutions of priming sugar. Boiling water can also be used in place of bleach to sterilize bottle caps, stainless steel kegs, and other utensils. It is also an effective way to remove residual bleach or other sanitizing agents from brewing equipment.

The microwave oven, an often overlooked item in many home brewers’ kitchens, can be used to heat and sterilize liquids. I find the microwave oven especially useful for making yeast starters because I can prepare and sterilize wort in the same container. To make a yeast starter for 5 gal of homebrew, for example, I heat 2–3 cups of water in a 1-qt jar or flask. After about 2 min at maximum power, I stir in ½ cup of dry malt extract and then microwave until the wort starts to boil (2–5 min). At this point, I continue to boil the wort for about 15 min, but at a lower power setting. The lower setting maintains the boil but with little or no boilover. I have found that 30–40% power is best, but your setting may be different depending on the output of your microwave. When I have finished microwaving, I immediately cover the jar with a cap or aluminum foil. It is important to make sure the cap is loose or else the contents will pull a vacuum as they cool. The steam from the wort will sterilize the inside of the cap. After about 10 min, I remove the sterile wort from the microwave and cool under cold tap water. Once cooled to room temperature. I add yeast to the starter. A similar procedure can be used to prepare priming solutions. I’ve also used my microwave to heat up water for sparging minimashes, rinsing my siphon tubing, and sterilizing hops before dry hopping.

Steam under pressure, or autoclaving, is the best way to sterilize liquids. The temperature of pressurized steam is greater than that of boiling water. Exposing liquids to steam at 250 °F (121 °C) under 15 lb of pressure for 20 min will destroy both bacteria and spores. The home brewer’s autoclave — the pressure cooker — is the recommended tool for preparing wort agar and other media for propagating yeast cultures.

Another process, called fractional sterilization or tyndallization, can also be used to destroy bacteria and spores and requires no pressure cooker. In this case, the liquid is heated to 175–212 °F (80–100 °C) for 30 min, three days in a row. This can be done in a pan of boiling water or in the microwave. It is important to keep the container covered (with plastic wrap, aluminum foil, or a loosened lid) to prevent the introduction of new spores during boiling. The basic principle behind this method is that any resistant spores should germinate after the first heating and therefore be susceptible to killing during the second and third heating.

Dry heat is also an effective mode of sterilization but is limited in its applicability because it requires prolonged exposure at high temperatures (1–2 h at 350 °F [177 °C]). It is the standard method for sterilizing laboratory glassware (autoclaving can allow condensation to settle on the glassware, which can be problematic) and can also be used for mineral oil or glycerol. I especially like this method for sterilizing beer bottles. I clean my bottles as I empty them, let them air dry upside down, then cover them with aluminum foil and put them into storage. The day before bottling I put all of my bottles in the oven and bake them for 1 h at 350 °F (177 °C). After baking, I allow the bottles to cool to room temperature in the oven; rapid cooling may crack bottles. Baked glassware can be stored for months without losing its sterility if it is tightly wrapped in aluminum foil. The disadvantage to this method is that you must remove all labels from the bottles before baking. Also, the strength of baked bottles may be reduced, and therefore they may break more easily. I have had no problems with bottles breaking, however, even after numerous bakings, but I am careful to heat and cool my bottles slowly.

Incineration, or passing small utensils such as inoculating loops through a flame, is also a form of sterilization but is of limited use for home brewers. A variation on this method is to spray a utensil with alcohol and then ignite it until the alcohol burns off. This is the preferred method for sterilizing the outside of a bottle from which you want to culture yeast. It is also a quick way to sterilize glass or stainless steel utensils. This method calls for extreme caution — a burning drop of alcohol can easily start a fire if dropped on something flammable (paper towels, clothes, and so forth).

Many breweries install ultraviolet (UV) lights in some areas because direct and prolonged exposure to 260-nm light will destroy bacteria and spores. UV light is one of the few agents that actually works better on spores than on live bacteria. Unlike the heat method of sterilization, which denatures or coagulates proteins, UV light damages the DNA or genetic content of the cell. This method is used primarily to reduce infection from airborne bacteria rather than for sterilizing equipment. It cannot penetrate solid material and is therefore useful only for the sterilization of surfaces. Also, be aware that eye protection should be worn when working around UV light because it can cause severe irritation to the cornea.

A number of chemical agents are also effective at disinfecting. One that many brewers are unaware of is soap or detergent. Besides aiding in the physical removal of bacteria-laden dirt, detergent can also destroy bacteria. It does so by disrupting the cell wall of the bacteria. At low concentrations, it is not as effective as some of the other sanitizing agents described below. It can also require excessive rinsing for removal. A little soap, water, and elbow grease, however, is a good starting point in any home brewer’s defense against infection, but it is only the first line of defense and should be used in conjunction with some other sanitizing procedure.

By far the most effective and reactive disinfecting agents are oxidizing agents such as chlorine bleach and iodine. Tincture of iodine and betadine are iodine-containing antiseptics commonly used for cleaning minor cuts and wounds. The disinfectant action of bleach is due to the formation of hypochlorous acid (HOCl) from water and chlorine gas (Cl2). Hypoclorous acid is a highly reactive compound that inactivates enzymes by destroying their molecular structure. Unlike other chemical agents, oxidizing agents can destroy both bacteria and spores. Bleach at a concentration of 1–2 oz per gallon of water corresponds to approximately 200 ppm of Cl2 and should be used to sanitize clean surfaces and brewing equipment. Cl2 gas at 1–3 ppm is added to water supplies and swimming pools to prevent infection. Levels as high as 50,000 ppm are used in the laboratory to decontaminate bacteria-containing solutions before disposal. 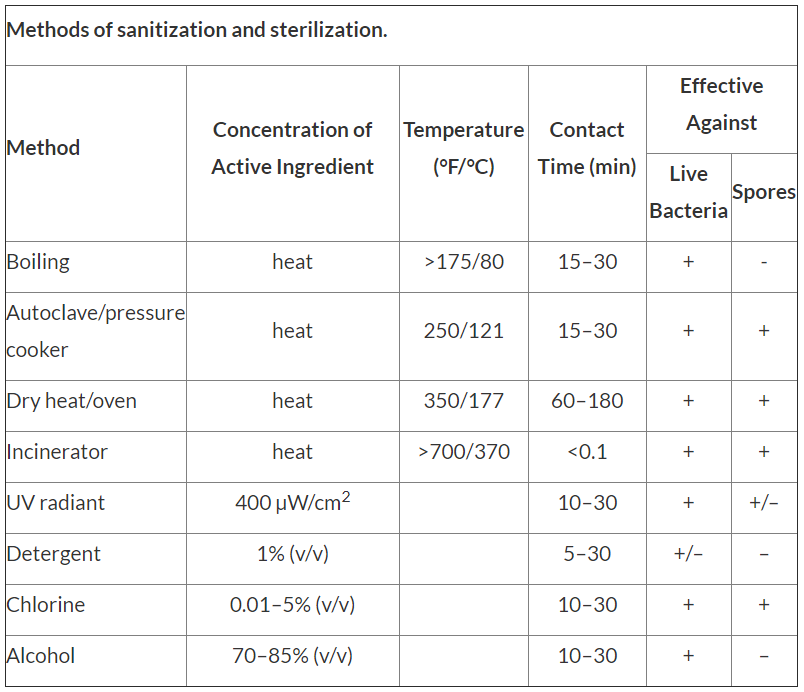 Although bleach is a good sterilizing agent, it is also corrosive (especially to stainless steel) and can be toxic. I recommend rinsing off residual bleach with hot water or some other sterile solution rather than leaving it on your equipment. Besides potentially adding an unwanted off-flavor to your homebrew, residual bleach may kill or reduce the viability of your yeast.

One sanitizing agent commonly used in the laboratory and that may be useful to home brewers is alcohol. Alcohols kill bacteria by denaturing proteins and disrupting their cell membrane. Rubbing alcohol (isopropyl) and ethyl alcohol are the best at disinfecting and are available at most drug stores. They are most effective at a concentration of 70–85%.. Although more costly than bleach, isopropyl alcohol is a must for most home brewers who want to do their own yeast culturing. I have a spray bottle in my brewery and use it to sterilize my hands, the work area (countertops), and utensils that I don’t want to bleach sterilize (for example, the end of a siphon hose). Alcohol available in the drug store is usually tainted with wood alcohol (methanol) or benzene, so it is unsuitable for ingestion. Because it evaporates quickly, residual alcohol doesn’t pose much of a problem. Cheap vodka or gin has a slightly lower alcohol content but may also be useful. Very low content alcohol, such as cheap beer (your favorite name-brand will do), can be used to rinse out residual bleach from fermentors, bottles, and siphon hoses.

Acids and bases (such as caustic-soda) are great for cleaning and removing trub and dirt but are not very effective at killing bacteria and yeast and therefore should not be used as a sanitizing agent.

Several factors can influence the sanitizing potential of chemical agents. Concentration and time of exposure are among the most critical factors. Many agents work better if used hot rather than cold. The use of very hot bleach, however, may reduce the amount of chloride gas, thereby reducing the concentration of hypochlorious acid. Cold bleach won’t really increase the chlorine concentration, so I recommend using either room temperature or lukewarm bleach solutions. The presence of other compounds, especially organic material (caked-on dirt), may interfere with disinfection because they may react with the sanitization agent and essentially neutralize it. Soaking dirty bottles in bleach, for example, may not be enough to sanitize them — they should be cleaned first.

Finally, a few simple practices can help reduce exposure to bacteria. First, sterilize your hands when working with sanitized utensils. To do this rinse them in one of the sanitizing agents discussed above (ethanol, bleach, or soap and hot water). Second, cover clean utensils and sanitized items. If you don’t have a cover, improvise. I like to use plastic wrap or aluminum foil. Some home brewers prefer paper towels soaked in bleach. Airborne bacteria are carried on dust particles, so covering equipment will help keep them out. In general, if your equipment is adequately covered so that dust can’t get into it, it shouldn’t get infected. That is one reason why I like to cover my clean bottles with aluminum foil before putting them away.

The physical and chemical methods described above are summarized in Table I and represent just some of the methods used in laboratories. Although bleach and boiling may still prevail in home brewers’ fight against infections, some of these other methods will be useful as well.