Please select from the following option(s) to see pricing and availability.
$36.99 & FREE Shipping on orders over $59.

(Makes 5 gallons) Jason, who recently graduated from the American Brewers Guild, now teaches our beginning and advanced brewing classes held every month in Concord, Ca. Jason use to brew up Jim Rossi's Honey-Pale and our B3 Stout and mix them together out of the tap 50/50. Jason decided to take it one step further and started brewing them together. He says "It is a like a Black and Tan" with a honey flavor of course. The beer does not taste like a true stout but is very far from being a Pale Ale. The continually positive response of "wow" from friends and other MoreBeer! customers prompted us to make his unique combination as his own kit, Honey-Stout. Thank you Jason for reminding us that when it comes to beer flavor, there are no rules. Jason recommends English yeast, WLP002.


Our recipe kits DO NOT include grain bags, yeast or priming sugar. The recommended yeast(s) can be found below. All grains will come milled, unless you select unmilled base malts.

Reviews
Powered by TurnTo
Review More Purchases | My Posts
5.0 / 5.0
2 Reviews
5 Stars
4 Stars
3 Stars
2 Stars
1 Star
2
0
0
0
0
All things good
Been brewing going on two years now: This was batch #19, and my first all grain (previous were all extract). Turned out great: Dark smooth malts mixed with creamy sweet, super low hops presence (zero bitter), round mouthfeel. Head was low, but present. Used a single packet of US-04, and got an amazing 90% efficiency out of my new BIAB rig to get close to 7.9% out of it. One of my favorite brews to date. 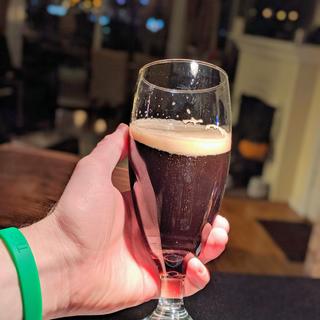 Honey Stout FTW
October 11, 2019
Eric Pavey
Purchased
7 months ago
Nice tasting stout. No head on mine though.
Tastes great, kind of on the sweet side. I like it. I did a 10-gallon AG batch, mashed at 154. og 1069, fg 1010 (7.6abv). Body is fine. wouldn't recommend lower mash temp unless you want very light body and even higher abv. Wouldn't go higher or it could be too sweet.

I have almost no head on the beer. what does form quickly dissipates. Not sure why, it's kegged at good pressure, plenty of fizz. Usually I get too much head/foam, not too little.... Thats What he said??. Anyhow, I would brew again, maybe would try adjusting grain bill to modify head.
January 8, 2019
E M