Please select from the following option(s) to see pricing and availability.
$39.99 & FREE Shipping on orders over $59.

MoreBeer! is proud to release this Black IPA recipe designed by our local homebrew Club DOZE. This black IPA recipe has been coined the name as 'Diablo Dark Ale' in honor of our resident Mt. Diablo. Here is where the Diablo Order of Zymurical Enthusiasts brew at the foothills fine tuning their homebrew recipes and sharing their passion for making great beer at home.

After winning the AHA Homebrew Club Of The Year in 2010, the Diablo Order Of Zymiracle Enthusiasts (DOZE) put their minds together to collectively craft a beer they felt representative of the club and its brewers. The initiative was taken on as an all club project that spanned 5 months. In the end, over 50 members contributed ideas to this recipe and nearly 40 individual batches brewed by 23 DOZE members were tasted and refined to a single recipe. This beer is inspired by the style many refer to as Cascadian Dark Ale or Black IPA, however it is not intended to fit the mold of any particular guideline. Mostly it is big, dark, hoppy, and delicious.


Our recipe kits DO NOT include grain bags, yeast or priming sugar. The recommended yeast(s) can be found below. All grains will come milled, unless you select unmilled base malts.

Reviews
Powered by TurnTo
Review More Purchases | My Posts
4.9 / 5.0
8 Reviews
5 Stars
4 Stars
3 Stars
2 Stars
1 Star
7
1
0
0
0
This is one of two of my house beers almost always on tap. If i am out its usually in the works.
Just hit 2 years brewing with about 60 batches total all grain 5 gallon kegged brews. This was one of prob the first 5 batches I brewed. I have brewed the recipe prob 6-7 more times changing or substituting grain to hops slightly.
This recipe is really dialed in. I will make sure i have what i need to stick with this recipe to the letter.
The only thing i have brewed to equal this is morebeer's kit (Janet's Brown ale) by Mike "Tasty" McDole. These two recipes are my favorites and the ones I get the most complements on. Flex your brewing prowess get this kit.
December 28, 2019
gregory schell
Purchased
over 2 years ago
Solid IPA
I messed this one up and left the 2nd addition hops in too long and when removing them, well, you can't get a square peg out of a round hole. So the "Black" is more of a very dark green.
It is still really good with more of the hoppier flavor and a dry finish. I will brew this again in the future and adhere to the directions but I do recommend it as I can see how good it would be if I didn't screw it up.
April 30, 2019
Tony C
Purchased
1 year ago
Excellent kit. Once my neighbors found out it was on tap it was gone in a few weeks. Already brewed twice and planning a third.
May 31, 2018
Cliff M
Purchased
over 2 years ago
Fantastic!
This is one of my favorite beer kits and by far my favorite black IPA. It is everything you'd want from a black IPA... some roasted malt and chocolate flavor and hints of bitterness along with a solid punch of hops. I've brewed both the extract and all grain kits multiple times. Both are excellent. I do favor the all grain kit but you can't go wrong with either.

I always serve this beer on nitrogen (beer gas) using a stout faucet. You get the amazing creamy head and smooth flavor.

This beer is so good it will haunt you! :-)
I've got another batch in the fermentor now... see photo 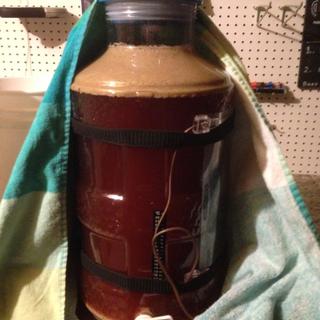 Moreover black IPA in primary fermentor
January 25, 2018
Stephen Hilla
Purchased
over 2 years ago
Very tasty beer!
This came out very good but not exactly as I expected. I am a bottler and in the future I think I would add another ounce or two of dry hops to help offset aroma/flavor degradation from O2 exposure and bottle conditioning. My first batch of this has come out a bit on the roasty/chocolaty side. I'm not complaining, but I expected a bit more hop aroma. Probably is much better served from a keg. That said, I will be getting this kit again in the future to tweek the process and recipe for my set-up.
July 9, 2017
Shake
All I can say is Wow!
I can sum this beer up in one word... AWESOME!

I brewed the all-grain version. Everything went according to plan, mashed at 154 degrees and I let it sit in fermentation for 4 weeks. Two weeks in primary, two weeks in secondary. It's like a hopped up Guinness. I got huge raves from all who tried it, even my neighbor who can't stand IPAs. I will be brewing this one again very, very soon!!
April 27, 2014
Fish
This Beer Will Be On Tap Again & Again
Wow! The taste, balance of hop bitterness and aroma, the look, all make this a winner.
My first look at this beer after racking to the keg was one of concern. It looked too dark while spilling into the keg and had a strong hop aroma that I thought would make it unpopular with the spouse. Was that wrong. I couldn't have been more wrong.
The taste is near perfect. The balance of hop flavors is nicely matched with the hop bitterness and malt. The hops are there, but not a hop bomb. Balanced.
The color was dark, but as it turned out, it was just dark, not heavy. The roast flavor is there, but so subtle. It only reminds you that you are not drinking a golden IPA, but doesn?t come off as a hoppy porter. The malt backbone is there. Balanced.
I?ve made one batch from the Morebeer kit and another from the recipe. The kit did a slightly better job than my attempt, but I had to sub a hop addition due to my LBS not having one hop in stock. I?m sure following the recipe properly would get the same result as the kit.
My wife must have drunk ?_ the keg. That?s unusual, but since this is so good, not unexpected.
I have standing approval to brew this beer anytime I want. High praise indeed.
April 4, 2013
EchoTony
Great beer and excellent kit
This was my first ingredient kit from More Beer, and I was thrilled with the beer. This is an extremely solid IPA: balanced taste yet not shy with the hops. It's also very drinkable. I wanted something that would serve as a solid go-to beer rather a big or unique brew and Doze does it. Many black IPAs (or Cascadian ales, or whatever you want to call them) seem more like Americanized porters, but this isn't one of them. There's a slight roast profile, enough to add a subtle complexity to the profile, but it's not distracting. I brewed with S-05; a little over a week in the primary and then a week in the keg. Tasty-- would brew again.
February 14, 2013
Mark L