Looking for the perfect American Pale Ale to share with friends this summer? Do you like a Pale Ale with a rich malt flavor and a ton of hop character but without an overwhelming bitterness? Then the Pale Ale II should be your next brew.

We took our American Pale Ale recipe and upped the malt, threw a ton of hops in the finish for flavor, but kept the bitterness the same. We think toning down the perceived bitterness is one reason we consistently get great reviews from brewers sharing this with friends.

Keeping it real: Part of the success of this kit is blending a lot of Willamette and Cascade hops in the finish. This isn't a wild, new or crazy idea... this is old school. Cascade and Willamette were the hops that helped put craft brewing on the map in the 1980's. The reason they are still so popular... they make a damn good beer.

Truly delectable and different yet still keeping it real.

Reviews
Powered by TurnTo
Review More Purchases | My Posts
4.7 / 5.0
25 Reviews
5 Stars
4 Stars
3 Stars
2 Stars
1 Star
18
7
0
0
0
Bubble bubble
We had ordered this a while back and decided to make some because we ran out of the glass lake pale ale, which by the way was incredible, It’s a great kit easy to use and if you follow the directions, guaranteed success. While cooking up the wart and getting my last bag of hops out I accidentally left one in until cool down. I set the bag of malt down to remove the lid From my cooker and looked down to pick it up and it had fallen over and lost a little onto the concrete. Be careful where you set your malt down… The rest of it went well and cooled quickly, put it into the fermenter and took the specific gravity which ended up at 1.062, projected high was 1.057. It sat fairly and active for a few hours so I ran to town and came back. I noticed that the bubbler seem to be Suspended in mid air and saw that the fluid was milky. I had walked in at the beginning of the blowup and began setting up for an overflow. I removed one of my old bubblers from the brew box and hooked it up to a half inch taygon hose and put it all in the sterilizing bath. Filled a 1 gallon pitcher about half full and installed the replacement bubbler and proceeded to give over onto my living room carpet LOL refilled my overflow tank and it was a continuous stream of bubbles coming from the fermenter nonstop. This is 24 hours later and the fermenter is full of foam and still bubbling continuously. I think it’s going to be some good beer.
October 17, 2019
Kdean
Purchased
7 months ago
Great beer for customization
I added 1 lb of Blood Orange Candi Syrup 3 days into fermentation. Then 3 days later I added 1 oz Amarillo hops. After a total of 16 days fermentation at 68-72 F I kegged this bad boy. Used WLP001 California Ale yeast that attenuated down to 1.080..This beer has a smooth mouthfeel with a crisp, clean and citrus finish. Deceivingly light bodies and very drinkable. But weighs in at about 6.8% ABV due to the candi syrup addition. Absolutely delicious!. 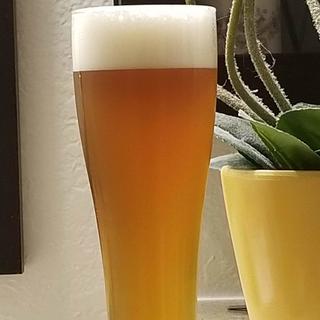 Blood Orange Pale Ale
May 27, 2019
Aaron Correll
Response from MoreFlavor
Thank you so much for your feedback. We really appreciate the honesty and value great feedback like this as it helps us improve our products. Cheers!
May 28, 2019
Tyler W Staff
Goes down way too easy
Great flavor, easy to brew and easier to drink.
December 9, 2018
John M
Purchased
1 year ago
Fantastic!
This was my first attempt at 5 gallon extract batch. Simple instructions. Beer was unbelievably good!
July 20, 2016
Tahomarr
I screwed-up, but it still came out great!
This is my first 5-gallon batch ever, but I screwed-up! I just finished building an all-new electric kettle setup using 220V. Prior to that, I was doing 1-gallon batches in my kitchen from another supplier.

So I was so focused on the entirely new process, that I threw in ALL of the hops in the beginning of the 60-minute boil instead of in timed intervals as directed in the recipe sheet. My bad. I was following the steps in the main instruction sheet and forgot about the one that was specific to this recipe. So I don't know what it's supposed to taste like, but it still came out great!

Lots of malt and caramel up front with a hoppy body and not-too-bitter finish. I'm not taking gravity measurements just yet, so I have no idea what the ABV came out to. My guess is somewhere around 5-6%. Either way, it came out better than many craft beers I've had, so, yeah, I will be buying this one again!
July 11, 2016
Mr. McGibblets
It's in the rotation
We like this recipe enough to put it in our regular rotation. I like to add a jar of the orange candy syrup at 5 min which also boosts the OG and with BRY-97, it finishes at around 1.015/016. I also add some additional bottling yeast to help crank up the carbonation.
December 22, 2015
mtpokit
not too hoppy
I enjoyed making this easy kit with 8oz cascade blood orange syrup and the bry-97 yeast ate it up in 4 days, bottled @1.012fg. On my re-order list.
August 7, 2015
mtpokit
Daily deal
How can you go wrong on an extract kit on a daily deal? I probably never brew anything by the exact recipe so I won't bother telling you what I think of this one. I will tell you that there wasn't a drop of the final product that did not get drank!
May 31, 2015
Mi Ke
very good brew
This was my first extract kit from "MoreBeer".

My first 5 gallon batch came out a little on the sweet side and my second batch came out slightly on the bitter side. My third Is in secondary. To me it tastes very close to a popular northern Cali pale ale. which is perfect because that's what I was hoping for... :-)
May 6, 2015
tstanonis1
Best Beer I've Ever Brewed
I have been homebrewing for more than 5 years and brewed this beer for the first time a few months ago for my friend's retirement party. I told my wife that I think this is the best beer I've ever brewed. She agreed.
Took the beer to the party. A lot of friends, who had consumed my homebrew in the past said the same thing. Needless to say, the keg blew before the party ended.
I made a second batch soon after the party. Now it is nearly gone. I'm ordering the third kit today. I may go ahead and order two.
This is an awesome recipe. Well done Morebeer.com!!!
April 28, 2015
Gary L
Great Starter Brew
If you are new to homebrewing or just getting back into the swing of things after a brewing hiatus then this is a great kit to get started with. Instructions are very straight forward and as long as you ensure that everything is sanitized you should not have any issues. I left this in primary fermentation for a little over two weeks(18 days). After 14 days of bottle conditioning, I poured one out to try and I am very pleased. The pale ale poured out very clear, amber in color, good head retention, crisp and very drinkable. I look forward to having a few more. I would definitely recommend this kit - you won't be disappointed.
November 19, 2014
Elliott1359
Have you ever had that feeling when you first sip a brew and think " oh no, I don't have enough of this!!" This is that beer for me. I have a diminishing stash in the fridge right now and two cases in bottles waiting to finish. And I logged on here to get another kit since I know that won't be enough. I gave some to my son for his 21st birthday and put Mr Burns and "Excellent" Pale Ale on the label and the name stuck.
November 14, 2014
George W
Best tasting brew to date
I find it hard to convince friends I made this beer. It's "too good"
July 1, 2014
Johnny Brew Good
Don't let the term
Often I steer clear of Recipes using the term American in the title. That's not the case with this one, this is a great beer. Not watered-down or thin as you might suspect an American beer recipe to be.
May 2, 2014
Denis M
Good kit
I usually all grain brew but picked this up as a Deal of the Day special. I forgot how quick and easy extract kits can be. I made this while cooking dinner and was boiled, cooled, and yeast pitched in less than two hours without and of the busywork/puttering of all grain
May 1, 2014
Scott w
Good kit
I usually do all grain but picked this up as a Deal of the Day special. I had forgotten how quick and easy extract kits are
May 1, 2014
Scott w
Really good
This was the first kit I brewed and it couldn't have turned out better. I dry hopped mine with cascade and centennial.
October 11, 2013
Frank
Easy to Brew, Great Taste
It was my first attempt at brewing and friends have continued to ask for more. The beer was very easy to brew and the instructions very straight forward. I enjoyed smelling and brewing the different types of hops in the kit and look forward to another batch soon.
May 29, 2013
C R
Excellent PA
I had in primary for 14 days and secondary for 7 days then cold crashed and kegged. Strong hop aroma/taste the first week but that has since faded and is an excellent Pale Ale. If you like a PA with more hop presence, but not quite an IPA fan, then this is the beer for you. My taste buds are migrating to IPA's, but this is my favorite PA. The only thing I may do differently next time is dry hop an ounce of Cascade for a bit more aroma.
May 8, 2013
MasterTheBrew
Great beer
Drinking it right now... Another ounce of Willamette to dry hop is a nice addition.
May 2, 2013
Scott C
On the money !
This brew came out very nice. It hit all the target points on taste,color and aroma. I will brew this agian. Every kit from Morebeer has been a home run for me !