Please select from the following option(s) to see pricing and availability.
$37.99 & FREE Shipping on orders over $59.

If you're blue, and you don't know where to go to, why don't you go where dry beer sits? Puttin' on the Spritz!

There's a new style on the scene that has everyone tapping their toes, and we're excited to bring you a beer from the man that started the tune. In our latest addition to the BrewMaster Series lineup we have one of the original Brut IPA's - Puttin' on the Spritz! This hybrid IPA is the brainchild of Kim Sturdavant of Social Kitchen & Brewery in San Francisco, California. We first met Kim on our journey to brew with and understand the amyglucosidase enzyme (the signature ingredient responsible for a Brut's dry character). Kim, being the stand-up fella that he is, was kind enough to not only share his knowledge of the AMG enzyme, but also the very recipe that shook up the brew scene and inspired countless iterations of the style.

Despite its dry character, Puttin' on the Spritz is sneaky drinkable with a thirst-quenching profile. El Dorado and Mosaic® hops impart tart citrus and tropical fruit notes, while a grain bill primarily featuring pilsner malt and flaked corn makes for an ultra-clean finish with almost no caramel or overt malty flavors. Crisp, dry, clean, crushable.

Curious about Brut IPA's? Check out There and Back Again, A Brut IPA Tale! In this article, our own Vito Delucchi takes us along on his quest to unlock the mysteries of the amyloglucosidase enzyme and discover the best methods for brewing Brut IPA's.  Also be sure to check out Kim's Brut IPA website where he discusses the philosophies, techniques, and history of this emerging style.

Our recipe kits DO NOT include grain bags, yeast or priming sugar. The recommended yeast(s) can be found below. All grains will come milled, unless you select unmilled base malts.

Reviews
Powered by TurnTo
Review More Purchases | My Posts
4.8 / 5.0
6 Reviews
5 Stars
4 Stars
3 Stars
2 Stars
1 Star
5
1
0
0
0
A Fantastic Clone
Bright and full of citrus flavor. I have made this twice (one with Omega Hornindal the other with Omega Voss) only difference was grapefruit vs orange notes from the yeasts. Mine actively fermented for about a week and were kegged after 11 days. I didn't hit the FG goal of 1.000 and suspect it was due to lower ferm temps, but still a noticeably dry, very tasty kit.
July 2, 2020
James Leif Lundquist
A solid kir
This kit was a crowd pleaser. The tropical notes of flavor and aroma hit the spot. The dry finish was great. I'm not sure if it was the AMG but there was active fermentation for 3 weeks. A much longer duration than I'm use to. I would recommend this product to any of my brewing friends looking to brew a Brut.
June 6, 2019
Brian P
Purchased
1 year ago
Response from MoreFlavor
Thank you so much for your feedback. We really appreciate the honesty and value great feedback like this as it helps us improve our products. Cheers!
June 7, 2019
Tyler W Staff
A great clone of the Social Kitchen original
Bright and bold with tasty hop flavoring for a special spring brew. This has been a winner with a wide range of my brew-loving friends. This will be a repeat brew for us.
May 10, 2019
Gary Amado
Great Brut! Nice dry finish, medium hops.
I ended up using Kveik Hornindal yeast for this beer and it turned out great. Since I kettle fermented this beer at 95F, I added the dry hops after cooling to my hop spider and left them in the whole fermentation. The Kveik took this beer to a FG of 1.000 in 3 days! Grain to glass in 5 days. This one went quick.
May 10, 2019
Jonathon Wilkerson
Purchased
1 year ago
Better than commercial examples.
Used California ale yeast. Huge candy and citrus hop aroma from the El Dorado hops on the nose, hint of sweetness with an effervescent quality in the mouthfeel, and when you swallow, nothing. No lingering tastes, just gone. Dry as a bone.

Make sure to do a few days at 70 when fermentation is done to eliminate diacytyl.
February 22, 2019
Scott W
Purchased
1 year ago
Fantastic beer! I'll be brewing it again and again!
AWESOME BEER! I've tried the Sierra Nevada and the New Belgium Brut IPAs and I loved them! I bought this kit in hopes that it would be good, it's not, it's GREAT!! It's better than both of the commercial ones I tried. This will be in the year round rotation for me in both the indoor and pool side kegerators! 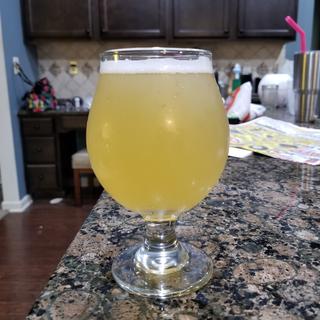 Puttin on the Spritz
February 5, 2019
Lisa D
Purchased
1 year ago
Response from MoreFlavor
Thank you so much for your feedback. We really appreciate the honesty and value great feedback like this as it helps us improve our products. Cheers!
February 6, 2019
Tyler W Staff