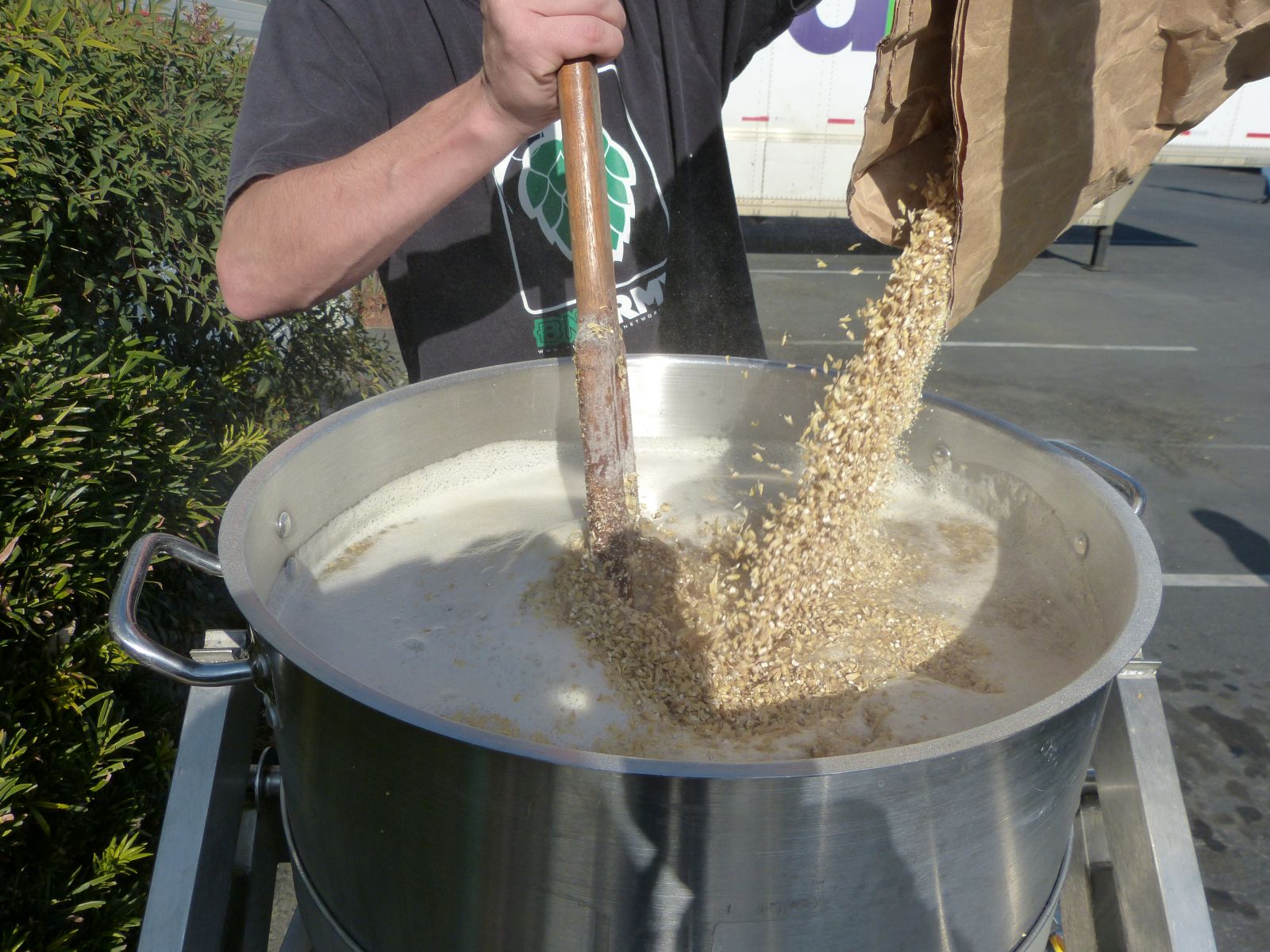 There is no reason for mashing to be a difficult, scary task. First-time all-grain brewers can easily produce outstanding beers, provided they master a few basics and try not to overcomplicate the process. This article covers some of the basic concepts required to successfully mash malt, provides a beginner’s recipe for a proven beer, and then covers some of the more advanced techniques, mash temperature importance, and explains some of the reasons behind the more advanced mash programs.

Let’s start with some of the concepts behind mashing. In its simplest form, it is merely the process of using enzymes to convert a malt’s starches into sugars, some of which are fermentable and some of which are not. In addition, an important purpose of a successful mash program is to reduce proteins into their constituent components, namely amino acids and smaller molecular weight proteins called peptides.

Sweet wort is a chemical soup of proteins, carbohydrates, dextrins, and other organic constituents that originate in malt. It is the composition of the sweet wort that the brewer is concerned with, at least in terms of malt character, body, mouthfeel, sweetness, and overall flavor perceptions (other than those that are fermentation- or hop-derived).

The brewer can mash malt using multiple temperature ranges, resting at each for a specific length of time, or at a single rest temperature. All mashing begins with the dough-in step, in which the dry ground malt is combined with water at a given temperature to begin the dissolution and hydrolysis of the malt. This is often followed by a protein rest in the 112–140 °F (44–60 °C) mash temperature range. This rest begins the process of reducing large proteins to smaller ones and often lasts from 10 to 45 min.

The mash is raised to saccharification temperature, which varies from around 140 to 158 °F (60–70 °C). It is in this range that most of the carbohydrates (in the form of starches) are enzymatically reduced to fermentable sugars (maltose, maltotriose, sucrose, glucose, fructose) and unfermentable sugar (dextrins).

Brewers often raise the mash temperature to 165 °F (74 °C) or higher, which is called the mash-off. At these temperatures, enzymatic activity is greatly reduced or terminated.

Water: The first thing a brewer needs to know is the general chemistry of brewing water. Many excellent references on water chemistry exist, so I won’t go into great detail here other than to point out some of the important aspects.

The place to start is with your local water company. Most companies provide a free report of their routine analysis of your tap water. With this in hand, you can determine the characteristics of your water and figure out what adjustments, if any, are needed. In general, brewers want at least 50 ppm of calcium in the brewing water. Many water sources have at least this much calcium; some can have five times that amount.

Brewers are often told to add gypsum (calcium sulfate, or CaSO4) or calcium chloride (CaCl2) to mash water to increase the amount of calcium ions present. Both of these methods work well to increase the calcium concentration, but gypsum adds sulfate ions. Sulfate ions are beneficial in accentuating hop bitterness; chloride ions are not. Thus, for delicate malty lagers, calcium chloride is a better choice than gypsum, but the choice ultimately depends on the overall water chemistry. Suffice it to say that the goal is to have at least 50 ppm of calcium (this should also help to force the pH of the mash in the right direction). For reference, 215 mg/L of gypsum will increase calcium concentration by 50 mg/L (ppm) (2), and 215 mg/L gypsum ≈ 1/6 tsp/gal. For calcium chloride, 185 mg/L, or ~1/7 tsp/gal, has the same effect.

The pH of the mash is important for optimal mash conversion, and depending on the water supply some brewers add a small amount of phosphoric or lactic acid to acidulate the base water to the proper range (5.3–5.7). Be careful when doing this, because acids are quite strong, and it is simple to overdo the correction. Also, be conservative when starting out and use just a little gypsum (1 tsp/5 gal water) to ensure the correct amount of calcium. The natural acidification process that accompanies the mashing of malt will usually take care of the pH for you.

Check out our selection of pH meters to test your mash water!

Malt selection: The next critical area for any masher is the choice of malt. I have had great success with many types of malt, but it helps to choose one that will fit into the type of beer you are making and the equipment you use to make it. For a brewer wanting to make a classic English pale ale or ESB, British pale ale malt is the natural selection. If you are making a classic German Pils, then Pilsner malt would be the norm. American pale ales can also be made with domestic U.S. two-row or pale ale malt.

The important thing to understand about malts is that they come with different degrees of modification. Modification can be thought of in terms of the conversion process that occurs during the production of malt from barley. Modification is a measure of the length of growth of the acrospire and can be roughly determined by chewing a malt kernel. Soft kernels are generally highly modified; hard kernels are considered to have low to moderate modification. Highly modified malts, because of the protein and beta-amylase rests performed by the maltster, are generally easier to mash. They convert more quickly and at higher temperatures than less modified malts.

There is a catch, though. Brewers sometimes complain about “overmodified” malts, which means that the maltster has done too much of the brewer’s job, and the resulting beer can be devoid of malt flavor, malt character, or mouthfeel and can exhibit poor head retention. These problems are not something to be overly concerned about in the beginning, but it is good to be aware of them. A German brewmaster recently complained to me that the farmers and maltsters were doing all of his mashing for him, that it was difficult for him to produce a wort that exhibited a high degree of attenuation while retaining adequate head retention.

Check out our wide selection of domestic and international brewing malts and grains!

Milling: So you know your water chemistry and you’ve selected a malt to fit your beer style and equipment. The next consideration is milling.

Many malts can be purchased pre-milled, which is an excellent way to start, though you may risk some loss in freshness. Some homebrew supply stores will offer to mill your grains, which is another good choice.

Properly crushed malt has the outside malt husk torn off of the seed but left somewhat intact; it should not be torn to bits. The inside of the kernel (the endosperm) should be broken into several pieces but not overly powdered or turned into flour. The husk is important because it provides a natural filter bed in the lauter tun and thus enables proper clarification and separation of the wort during lautering.

If you want to mill your own grain, check out our selection of grain mills!

Lautering: Lautering is merely the process of gently spraying or pouring warm water (170–176 °F/76–80 °C) over the mashed grains to rinse the sugars away from the spent grains. The first stage of lautering involves a period of recirculating the turbid runoff, usually lasting between 10 and 30 min in a typical home brewer’s lauter tun. Once the runoff is reasonably clear, the sweet wort is diverted into the kettle. As the kettle fills with wort, the brewer adds hot water above the grain bed to keep the grain bed covered with water, which will help to keep the mash from compacting and becoming stuck.

Lautering is complete when the desired quantity of wort is obtained, or when the wort running’s specific gravity falls to 1.008 (2 °P). At no time should lautering be continued beyond this point, as undesirable tannins may be leached from the malt husks.

To begin the mash, measure the amount of water to be used for dough-in, usually between 1.2 and 1.5 qt/lb of malt. Heat this water to 165–167 °F (74–75 °C). Add 1 tsp of gypsum if desired. Slowly stir in the well-milled malt, being careful to completely stir it in as you add it to the mash tun. If the malt is not properly stirred and dough balls form, break them apart or the extract potential in the ball will not be realized.

When all the malt is stirred in, check the temperature; it should be between 148 and 154 °F (64–68 °C). If the temperature is too low, add heat or boiling water to bring it up to the proper temperature. Take notes for your records so you can get a history of how your equipment works in practice. Hold at this temperature for 1 h, stirring once or twice during the hour.

It is useful to insulate the mash tun to minimize heat loss during this proccess. Mash tuns can be easily insulated using blankets, reflective insulting material, or even foam camp pads.

If your tun is heatable, raise the temperature at the end of the 1-h rest to 170 °F (77 °C) by adding heat and stirring constantly. If your tun is a cooler and cannot be heated, stir in boiling water to raise the temperature or just leave it at the current temperature (it will still work fine but may be more difficult to lauter). At this point, the mash is complete and your task is to separate the sweet wort from the spent grains through the lautering process.