Our portable jockey boxes are the perfect solution if you want to bring cold beer to an upcoming picnic or outdoor gathering!  Also known as draft boxes, these modified coolers are incredibly mobile and promise to dispense cold brew all day long, even when a refrigerator isn’t accessible.

MoreBeer! carries jockey boxes converted from Rubbermaid insulated coolers to keep the beer coils inside ice cold, and they come with either one or two 50-foot stainless steel coils to make serving the beer a breeze. We also offer all of the essential supplies that you may need to keep your jockey box working its best, including pass-through shanks, extra draft coils and more! 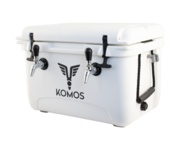 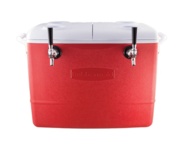 The Joy of pouring Homebrew at a Festival

For homebrewers sharing the beer you brewed is one of the most satisfying parts of homebrewing.  Here in the San Francisco Bay Area we’re lucky to have several beer festivals that allow us to do so. One of these events is The Brewing Networks Winter Brews Fest. Not only do some of the best Bay Area breweries pour beer at this festival, but the late great Mike “Tasty” McDole used to run the homebrew tent where he would invite all the local homebrewers and homebrew clubs to pour their beer at. Some years we would have over 40 homebrewed beers pouring at once! As you can imagine this was a pretty amazing feat and took a lot of setup and planning.  We would line up jockey boxes side by side and setup a good hour or two before the event to make sure everything was pouring good and our menu was filled out. Not to mention organizing pouring shifts. Every homebrewer wants the chance to pour their beer for the public and we loved seeing the smile on their faces as they did so.

To say that Tasty’s Tasting Room was arguably one of the most popular booths at that event would be a disservice. It was the most popular booth and always had the longest lines of the event. It was common to hear to things like “You guys have the best beer at this event”. As a homebrewer that was definitely very flattering, one thing was for sure, we definitely had the most eclectic selection of beers. Being a homebrewer allows you to experiment and try things most commercial brewers would not or have not had a chance to try yet. Speaking of pro brewers, it was common to see them at our booth conversing with Tasty and trying some of the better beers he would point them towards. It sure felt good pouring for the public, but when Tasty would tell someone like Vinny from Russian River he needs to try your beer, that was the end all be, all of being a homebrewer!