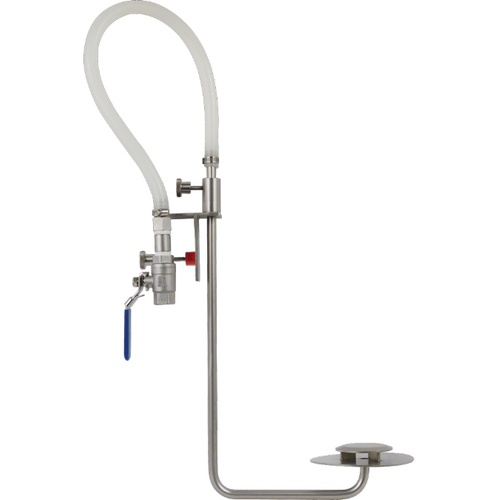 Will skipping the sparge step create beers with superior flavor? A home brewer’s experiment sets out to determine whether objective differences can be discerned between sparged and nonsparged worts.

A few years ago, I asked George Fix and Paul Farnsworth what techniques I should use to make the finest possible all-grain beer. Both of them immediately told me, “Don’t sparge.”

Though I’d never heard of the technique before (it is rarely mentioned in modern brewing literature), making strong or premium beers exclusively from the “first runnings” of the mash is an ancient technique. When Shakespeare’s Jack Cade promised his followers that when he became king besides killing all the lawyers (!) he would make it a felony to drink small beer, he was alluding to the technique of using the first runnings of the mash to create strong or premium beers and using the second, third, or even fourth runnings to make inferior “small beers.”

Be brave, then; for your captain is brave, and vows reformation. There shall be in England seven halfpenny loaves sold for a penny: the three-hooped pot shall have ten hoops; and I will make it felony to drink small beer: all the realm shall be in common; and in Cheapside shall my palfrey go to grass: and when I am king, as king I will be … —Jack Cade*

Indeed, fly sparging and the “entire” method of boiling all of the runnings of a mash together are fairly recent innovations, born of the economic need to maximize industrial brewhouse yields and spurred on by the technological advancements that allowed the fabrication and firing of large kettles.

Since learning of the “no-sparge” method, I’ve brewed dozens of batches using variants of this simple technique (see box, “An Overview of No-Sparge Techniques”), and in my opinion it produces a superb beer in a shorter, simpler brew cycle.

But while it cannot be disputed that using a no-sparge regimen shortens and simplifies the brew cycle (at the expense of using slightly more grain) and produces good beer, the question remains whether it truly produces tastier beer. The conventional wisdom and anecdotal evidence I’ve collected over the past few years from other amateur brewers indicates that it does. Most respondents echo Fix’s finding that this technique yields a richer beer with a more intense, higher quality malt flavor. But why should this be? Sparging primarily rinses trapped sugars and strong sweet wort from the spent grains, so what’s the big deal, as long as you don’t oversparge? As a skeptical BJCP master judge once asked me, what’s the difference between the “points” from first runnings and those from sparged runnings?

*William Shakespeare, King Henry VI (Part II), Act IV, Scene 2. A “three-hooped pot” was a serving vessel used in taverns of that era, with “hoops” or gradations showing the approximate volume. In modern terms, Cade’s proposed expansion of the three-hooped pot would be akin to a politician promising to make all six-packs contain 20 beers.

Mort O’SuIlivan, a masters degree candidate at the International Centre for Brewing and Distilling in Edinburgh, Scotland, articulated one possible answer. He hypothesized that beers made exclusively from first runnings taste maltier and richer than beers of equivalent gravity made from sparged wort because sparged wort is higher in reduced polyphenols (especially tannins) and other compounds. At high levels, of course, tannins and other polyphenols impart an unpleasant astringent or husky flavor. Even at lower levels, however, they tend to adhere to proteins on the tongue, coating the taste buds and partially blocking some of the taste sensation. Thus, sparged and unsparged beers of equivalent gravities may, in fact, have comparable amounts of sugars and other compounds responsible for malty taste, but the consumer perceives that sparged beer is duller tasting than beer made exclusively from first runnings because the higher polyphenol levels partially inhibit taste sensation. 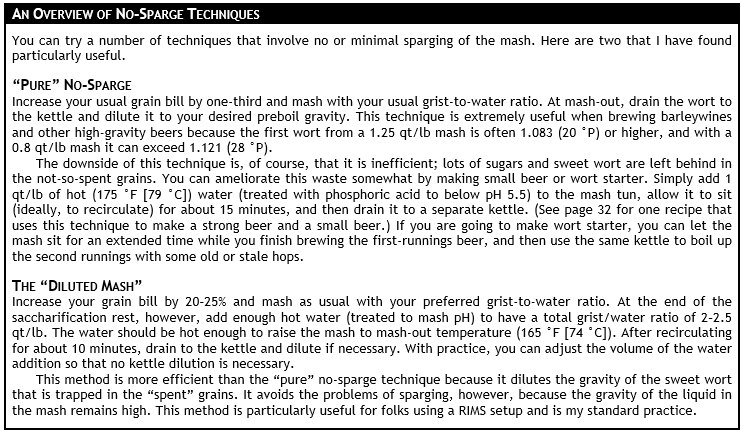 To test the conventional wisdom and O’Sullivan’s hypothesis, I devised the following experiment: Prepare two beers from the same mash, with one made exclusively from first runnings and the other from a mixture of first and sparged (but not oversparged) runnings. Dilute each to the same preboil gravity and volume, and then boil, hop, and kettle fine each batch identically. After running the worts through the same counterflow chiller into identical fermentors, dilute the worts as needed to identical prefermentation gravities. The beers must then be pitched identically and fermented, aged, and conditioned side by side, under identical conditions. The finished beers could then be analyzed using various laboratory and sensory tests to determine if there are any perceptible differences between them.

For this experiment, I chose a beer style — extra special bitter (ESB) — that has a malty profile and would not require a prolonged aging period. I chose hopping rates, yeast, and carbonation levels that would impart as little flavor as possible, so that any differences in malt character would be accentuated. The recipe (see box, “No Sparge ESB,”) was developed with the assistance of BJCP Master Judge Scott Birdwell, who also helped with the brew and audited the data collection (thanks, Scott!).

After mash-out, we drained 6.5 gallons (about 85% of the first runnings) of 1.081 (19.5 °P) sweet wort to one kettle. We then added 7 gallons of 168 °F (76 °C) water to the mash tun, treated with phosphoric acid to adjust the water to match the pH of the mash, and allowed it to recirculate for 10 minutes. This yielded 9 gallons of second runnings with an overall kettle gravity of 1.027 (7 °P). The last of these second runnings was approximately 1.015 (4 °P), so a fair amount of extract still remained in the grains. Regardless, I didn’t want to skew the experiment by even getting close to oversparging, so I stopped the sparge at this point.

We boiled the two test batches for 70 minutes, hopped and kettle-fined them identically, and then chilled them and ran them into identical 25-L carboys. The first-runnings batch yielded 5.25 gallons of 1.051 (12.6 °P) wort, to which I added 3 qt of water, yielding 6 gallons of wort at the target gravity of 1.044 (11 °P). The sparged batch yielded 5.75 gallons of 1.044 (11 °P) wort. Both batches were then inoculated with 1 qt each of yeast slurry from a local brewpub (thanks go to the Houston Brewery and brewmaster Tim Case).

The batches were then placed in a 60 °F (16 °C) refrigerator. Within 2 hours, both had 2-inch kräusens, and after 12 hours we raised the ambient temperature to 64 °F (18 °C). Results of force tests (pitched and unpitched) of both beers were negative for contamination 96 hours after taking the samples. After 72 hours of fermentation, the gravities of both batches had dropped to 1.010 (2.8 °P). We racked the beers to Cornelius kegs and dropped the temperature to 50 °F (10 °C). Seven days later, I fined the beers with DryFine (synthetic isinglass), dropped the temperature to 40 °F (4 °C) and subsequently force-carbonated to an estimated 1.0 volumes.

Gravity: Final gravity measurements were taken using a pycnometer and a milligram balance. The beer made from first runnings had a final gravity of 1.00764; the sparged beer had a marginally higher final gravity, 1.00808. Apparent attenuation for both batches was approximately 82%, which is in the range expected for this yeast strain (Wyeast #1056).

Appearance: The beer made from first runnings was noticeably richer in color. Analysis with a spectrophotometer confirmed this visual observation. The first-runnings beer measured 16.1 °SRM; the sparged beer measured 14.2 °SRM. In addition, the beer made from first runnings had slightly better head retention and appeared to lace better on the glass.

Protein: Protein content was measured using a Bio-Rad Protein Assay* and a spectrophotometer. No measurable differences were detected in the protein contents of the finished beers by this method.

*The Bio-Rad Protein Assay is available from Bio-Rad Laboratories, 1-800-4BIORAD. The technique is an application of the Bradford Method, described in Analytical Biochemistry. Although this method is very simple and probably adequate for a simple comparison test such as this, it is nowhere near as accurate (or as complicated) as the official ASBC method of determining protein. The ASBC method involves digesting all the proteins in a sample down to ammonia, which is then collected and measured.

Total polyphenols: According to assays performed by Paul Farnsworth (thanks, Paul!), O’Sullivan’s hypothesis was correct: the first runnings beer had polyphenols of 369 mg/L, while the sparged beer was significantly higher at 393 mg/L.

Total ash: According to assays from Farnsworth, the total ash contents of the two beers were not significantly different.

Taste panels: My personal evaluations of the beers confirmed what I had observed in the past — the beer made from first runnings was noticeably richer and maltier tasting. Such an evaluation can hardly be considered objective or scientifically accurate, however, as I knew what the beers were and had an expectation of what the results would be. 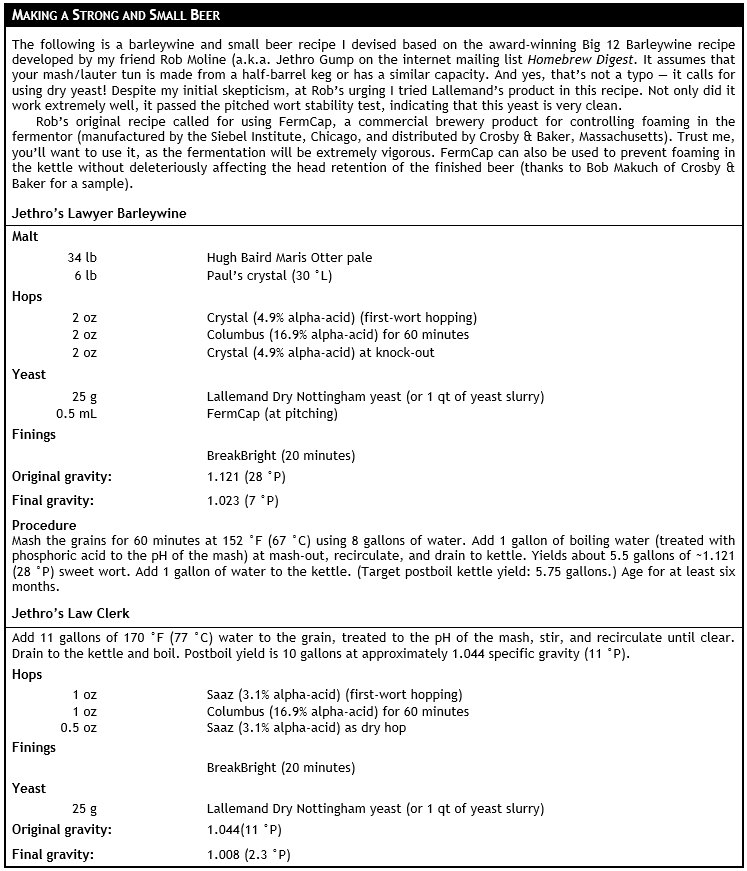 Accordingly, I invited a number of BJCP judges and professionals in the brewing industry and members of Paul Farnsworth’s tasting panel to evaluate the beers using the ASBC Triangle Test methodology.

A total of 13 tasters evaluated the two beers using this methodology. Eight correctly identified the different beers. These results indicate that the beers had perceptible differences between them, and they are statistically significant at a 5% risk of error level). When asked to describe the differences between the beers, most of the respondents who correctly identified the different beer reported that the first runnings beer tasted richer and maltier. Also of interest, all of the professional brewers who participated had no trouble correctly identifying the different beer, while one BJCP Master Judge could not do so on his first attempt (he successfully did so on his second attempt, but I did not include this “second chance” in the results).

Obviously, one experiment is insufficient data on which to base any definitive conclusions. The data collected so far, however, does seem to support the conventional wisdom that no-sparge brewing does produce a richer, maltier product, even when compared with a beer that was probably undersparged relative to prevailing techniques. These findings, combined with the anecdotal evidence I have collected to date and the indisputable fact that not sparging makes for a shorter and simpler brew cycle, perhaps suggest that amateur and craft brewers should consider revisiting this ancient technique.