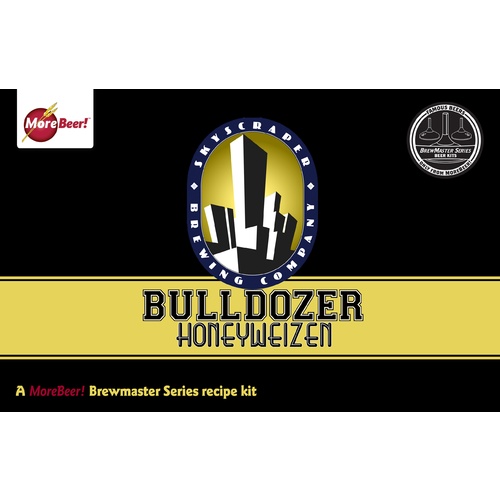 Phil Sutton, owner and head brewer at Skyscraper Brewing Company, was in our local homebrew club, D.O.Z.E. After taking the American Brewers Guild program, he realized brewing was what he wanted to do, and left NorCal to head down south and open up Skyscraper. Phil says, "I started out, like everyone, as a homebrewer. Living in Salt Lake City in 1999, I got sick of paying $13 for a six pack of Sam Adams, and some homebrewer friends got me started with my first batch, a hybrid Bohemian Pilsner that was fantastic! When I got sick of my job writing software, I attended the American Brewers Guild program, worked for BJ's for a year, and then struck out on my own." Most of you have probably already seen the brewery in a certain cellular phone ad, where two guys are trying to sell beer - the guy on the forklift was Phil himself! His Bulldozer Hefe is Phil's flagship beer, and he was kind enough to let us in on the recipe. Next time you are in Southern California, be sure to put Skyscraper on your list of must-visits! Check Phil out online at Skyscraperbrewing.com

Reviews
Powered by TurnTo
Review More Purchases | My Posts
4.0 / 5.0
3 Reviews
5 Stars
4 Stars
3 Stars
2 Stars
1 Star
0
3
0
0
0
Rated 4 out of 5
A staple for my 3 tap keezer
My wife loves this light & sweet wheat. That's why it will become a standard in my keezer. It seems my friends approve as well, since it's hard to keep enough on hand. I'm a total hop-head, but I must say that this is a great session beer, with lots of flavor. I control fermentation temps in the low to mid-60s to effect a crisp, yet hearty brew.
September 19, 2013
Hopalong Hank
Rated 4 out of 5
A nice summer brew that was easy to make
The flavor was smooth and sweet, with a high ester profile. I've added a bit of maltodextrin to some batches with good results; it keeps the light flavor but makes the brew a bit more hearty. Temperature control in the fermentation is key to keeping the off-flavors away, but cold conditioning does wonders with it no matter what.
May 29, 2013
Dan Z
Rated 4 out of 5
An excellent, light-bodied, summery beer. Kit is easy to brew and a good starting point for american wheat beers.
I have brewed this kit several times, and I have adapted the recipe for other kinds of american-style wheat beers. This produces a great, light, summery beer. It has been a consistent hit with friends and family- there is often a push for me to brew more of it.

As I am very space constrained and move often, my brewing setup is very limited. I struggle to find good, light-bodied beers with mass appeal that I can brew, as I have no ability to try all-grain brewing or lagering. As I had no prior experience formulating American-style wheat beer recipes, I decided to start with this kit. This brew has proven very popular and a good starting place for adaptation.

The only major drawback is the relatively steep price, driven largely (I think) by the honey. Still, I recommend this kit for anyone looking for a crowd-pleasing, easy-to-brew summer beer.
May 6, 2013
Erik J