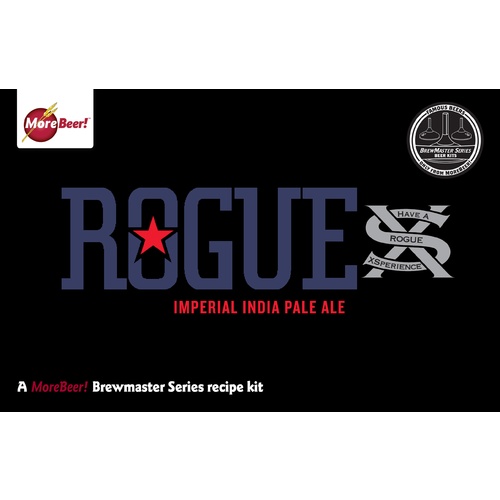 John C. Maier of Rogue Brewing Company, Newport Oregon has been an avid homebrewer since 1982. In the Fall of 1986, he decided to turn his passion into a job and attended the Siebel Institute of Technology, graduating from their 50th course in Brewing Technology. The Alaskan Brewery in Juneau hired John as Assistant BrewMaster in March of 1987. In 1988 he won the prestigious American Homebrewer's Association Homebrewer of the Year award. In May 1989 he left Alaska Brewery, and that same month walked in on the very first brew at Rogue Ales Brewery in Newport, Oregon. He has brewed over thirty million pints of beer for Rogue since.

Rogue beers have won too many awards to list, and the brewery consistently receive the highest level of critical acclaim. In our opinion, Rogue makes some of the most original and best beers anywhere because John continuously experiments to expand and refine his brewing creativity. His commercial brewing for Rogue reflects his homebrewing background, in that Rogue produces an amazing variety of beers - well over 20 different regular styles plus additional seasonal specialties. Their beers are always intense, distinctive and literally packed with flavor. We know of no other hands-on BrewMaster who makes as much beer commercially (Rogue brews 1550 gallons per batch), yet still finds time to develop 20 gallon pilot batches for new, commercial beer products. In order to insure that his pilot brews run as quickly and consistently as possible, Rogue recently purchased a MoreBeer! Model 2050 Professional Series BrewSculptureTM System (pg. 54) with all available options, plus a 24-gallon MoreBeer! Stainless Conical Fermenter with cooling option. This industry-standard brewing system now serves as the product developmental platform for all new Rogue beers. Visit Rogue in either Newport or Portland, Oregon, or online at www.rogue.com.

Imperial India Pale Ale ("I2PA") Recipe We were ecstatic when John offered us his famous Imperial India Pale Ale recipe as an ingredient kit. I2PA is a malty beer that is radically hopped with an intense aroma and hop bitterness. You can think of I2PA as an IPA on steroids. We suggest you buy a bottle of Rogue I 2 PA and see how your version matches up against the original. John recommends using White Labs California Yeast, WLP001.

Reviews
Powered by TurnTo
Review More Purchases | My Posts
5.0 / 5.0
3 Reviews
5 Stars
4 Stars
3 Stars
2 Stars
1 Star
3
0
0
0
0
Rated 5 out of 5
Rogues as good as an IPA can be.
Very happy with Rogues. This IPA was very good. A little too good as it was gone very quickly. Brewing, I hit the target S.G. and alcohol %. I ordered again.
October 26, 2021
Jimmyk
Purchased
1 year ago
Rated 5 out of 5
A very delicious IPA!
I probably will make it a staple beer of mine. :)
February 13, 2016
Gang L
Rated 5 out of 5
Well Done!
What a nice kit! I ordered two of the All Grain kits, to make 10 gallons. Comes with milled grain in nice packages, hop pellets in little packets, a Whirlfloc tablet, and even corn sugar for priming in case you are going to bottle it. A very complete and nice kit. Only thing you have to provide is yeast and water...