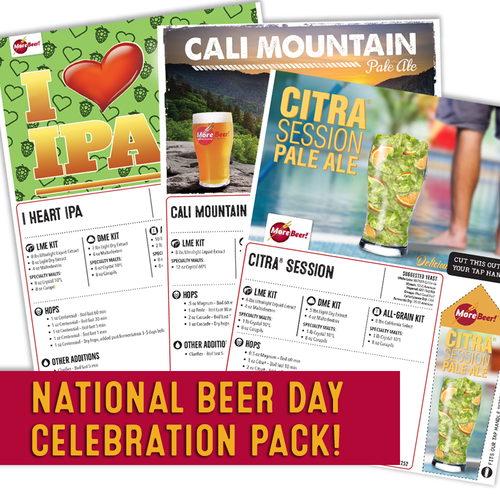 Celebrate National Beer Day with three crushable brews. From the 100% Centennial hopped I Heart IPA, to the Sierra Nevada Pale Ale clone Cali Mountain, to the Citra® focused Session Pale Ale, you'll enjoy some of the best flavors craft beer has to offer.

MoreBeer! is pleased to bring you yet another, A Beer Combo Deal (ABCD). We put the IN in indecision, by dropping a collab of some fresh (new) and dope (best-selling/seasonally appropriate) kits at a great price. Includes FREE YEAST! Choose from extract or all-grain, all grains come pre-milled.

In this edition, we are featuring three American hop focused recipes:

One of our most refreshing ingredient kits available!  Citra® Session Pale Ale is an easy drinking beer with a light color and low ABV. With a fairly basic malt bill and clean bitterness from Magnum hops, the flavor profile of Citra® is really able to shine through with all of its citrus and tropical fruity goodness. If you're looking for a clean, hoppy beer that allows you have a few without the IPA buzz, then the Citra® Session Pale Ale should definitely be on your radar!

Our Cali Mountain Pale Ale is inspired by one of the most iconic pale ales in the country: Sierra Nevada's Pale Ale. This pale ale is a fairly simple recipe, consisting of 2-Row malt, Crystal 60L, and four hop additions.  This being said, don't be fooled.  The flavors blend together perfectly, creating a complex yet easy to drink homebrew.  The bittering hop additions are Magnum and Perle which provide a clean bitterness that balances the sweetness from the Crystal 60L malt perfectly.  The aroma hop and dry hop additions are both Cascade, providing a citrus & floral aroma as fresh as the forests in California's mountains!

An amazing IPA derived from one of our favorites, Bell's Two Hearted, the I Heart IPA is a true Centennial hop bomb!  Using Centennial as the bittering, aroma, and dry hop additions gives you a true understanding of how incredible and universal this hop can be.

Light in color and body, the malt character hides a little, allowing the burst of Centennial flavor and aroma shine.  Our Bell's Two Hearted clone recipe has a slightly lower original gravity than the original.  Coming in at right around 6% ABV, this isn't one of those IPAs that will make you shy away from a second!

Our recipe kits DO NOT include grain bags or priming sugar.  All included steeping grains will come milled.

Reviews
Powered by TurnTo
Review More Purchases | My Posts
5.0 / 5.0
1 Review
5 Stars
4 Stars
3 Stars
2 Stars
1 Star
1
0
0
0
0
Rated 5 out of 5
So much fun!
This gave an opportunity to take an adventure trying some new variety brews, liquid malt & hops. This also gave us a chance to get better stocked up so we don’t run out while waiting for the next beer. We have something going every weekend.
April 19, 2022
kelly s
Purchased
9 months ago