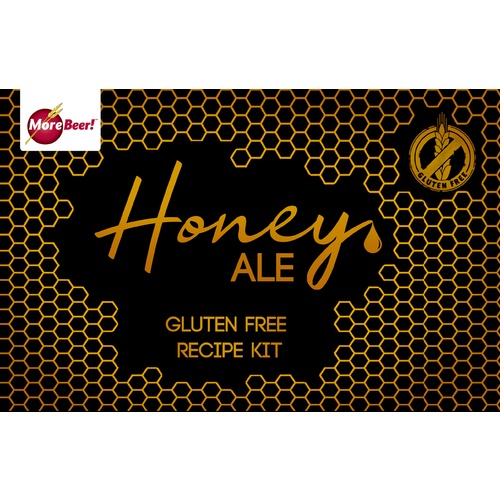 Honey Ale - Gluten Free Beer Recipe Kit (5 Gallons)
Description
This ale recipe features the use of clover honey, dried rice extract and sorghum. Try adding some dark candi syrup to give it some color.
Gluten-Free beers are a different world when it comes to finding a suitable replacement for the base extract. Celiacs are allergic to the hordein protein found in the base malts such as 2-Row and Pilsner malt.
They are also allergic to the gliadin protein found in wheat which is the biggest offender of the two proteins. As a homebrewer your goal is to find a suitable fermentable that can emulate the maltiness in beer.
Our Gluten Free recipes use Sorghum extract for the base fermentables. Hops aggressively cut through the maltiness from sorghum easily. Hop additions in gluten free beers tend to be 40-50% less than normal.
All our gluten-free kits include dry yeast due to the small traces of the gliadin protein found in liquid yeast. (Although lab research has found the yeast metabolize the gliadin protein after fermentation and significantly reduce the ppm present.)
Documents
Customers Also Purchased

--Doug
0
Yes, I had a problem with a stalled fermentation on this one. It stopped completely, too soon, for a day or two, and then spontaneously picked it up again. But on this one I also made a mistake in adding a chopped up lemon to the boil—have since learned that while you can do that with an orange, doing it with a lemon gives you too much pith/bitterness and you should stick with zest. So I'm not sure what to blame it on, besides operator error, but for me the final product wasn't good.
Vote for the best answer above!
How much dark candi syrup do you recommend adding to the gluten-free honey ale?
Nick Arleth on Jun 18, 2018
BEST ANSWER: One to two pounds should add significant flavor.
Zach,

When would you add the syrup? Beginning of the boil? I’ve seen different suggestions around the web.

Within the last 20 minutes of boil would be my suggestion.

When would you add the syrup? Beginning of the boil? I’ve seen different suggestions around the web.

Within the last 20 minutes of boil would be my suggestion.

Best,
Zach
Vote for the best answer above!

Reviews
Powered by TurnTo
Review More Purchases | My Posts
3.6 / 5.0
10 Reviews
5 Stars
4 Stars
3 Stars
2 Stars
1 Star
4
1
3
1
1
Rated 1 out of 5
Did not like at all
Way too sweet for my taste
February 23, 2022
Kathleen P C
Purchased
over 2 years ago
Rated 5 out of 5
Great honey taste.
Modified the recipe a little. Pitched the honey at end of boil. This keeps the honey taste in tact. I don’t normally do kits, but morebeer does a nice job putting the kits together. I pitched the yeast too early so fermentation is a little slow but progressing ok. Should be ready for kegging in about a week. Took a sample at 4 days in the fermenter. Really nice light honey taste. The sorghum extract in the kit seems to be better tasting then other extracts I have used.
April 26, 2018
Jeffery Mark H
Purchased
over 4 years ago
Rated 3 out of 5
Drinkable but needs mods
This was my first GF beer to ever taste. I read all these reviews first so my expectations were somewhat low, so I was pleasantly surprised. Yeah, it doesn't taste like a regular beer but it's still beer and very drinkable. I served this at a beerfest and got mostly positive feedback. I made this for a celiac friend who knows her GF commercial beers and she thought it was good. She gave me feedback similar to the following... (my taste review)

Taste: Light, but not too light. Sweet, which I like, but it was way tart. Not enough hops and mouth feel not great. No hop aroma. This beer tasted a light version of champagne. That was surprising, but it was still enjoyable.

I'm going to make this again with more hops, dry hop, and maltodextrin.
August 25, 2015
Wes
Rated 3 out of 5
So-So
Brewed this to give away to some friends who are part of the anti-gluten crowd. I wasn't too impressed with the taste, definitely NOT like real beer.
May 8, 2015
Paul L
Rated 5 out of 5
Best GF Beer so far
Great recipe! For those who expect sorghum to taste like 2 row malt... sorry, never gonna happen. However, this kit really hit the top of the mark when it comes to GF beers. My wife has celiac, I brew 2 row for myself, and sorghum for her. This is the first sorghum based beer I actually like! I always practice secondary fermentation, and keg my beer batches.. Please don't ever discontinue this one. My wife will be devastated.
May 2, 2014
Joseph M
Rated 5 out of 5
GREAT GLUTEN-FREE BEER!
I have never home-brewed before, and tried this recipe out as my first.

As someone who is SEVERELY celiac, and has tried just about every single gluten-free beer on the market, I was shocked at how good this tasted. People who are not gluten-intolerant preferred it to other beer in my house.

I bought the light ale, but plan to re-order this for another batch coming up instead.
January 6, 2014
Mara O
Rated 2 out of 5
STILL UNDECIDED
THIS IS BETTER RECIPE THAN THE GLUTEN FREE PALE ALE. IT HAS MORE WHOLE MOUTH FLAVOR. i STILL THINK THE YEAST COULD BE TWEEKED A LITTLE, BUT IT NEEDS SOMETHING, A DIFFERENT FLAVOR ADDITIVE OR HOP. IT DOES HAVE A METALIC FLAVOR, BUT AGAIN BETTER THAN THE PALE ALE. IVE MADE OTHER COMPANIES GLUTEN FREE RECIPES AND THEY TASTED ALOT BETTER THAN THESE. THEY DIDNT HAVE THE AFTERTASTES. I JUST BOTTLED IT, AND WILL SEE IF THE CARBONATION PHASE HELPS IT.
December 3, 2013
leila n
Rated 4 out of 5
Works well with some tinkering...
I have been making this particular kit for my wife, who is gluten sensitive, for a couple years now. With about 6 or so batches done, I have learned to tinker with the recipe a bit to help cut through or mask that metallic flavor the sorghum provides, which is the biggest problem with sorghum-based recipes. I add others hops (something citrusy like Amarillo or Citra or the like - about an ounce that I split in half for the additions) to the existing hop additions in the recipe. I also, and this seems to be where the beer gets waaay better, dry-hop the beer with an ounce or so of the same extra hops from the boil (sans Saaz). I have served the results to beer and non-beer-saavy folks alike with great feedback. More importantly, the wife LOVES it and that's all that matters to me. I recommend folks do the same tinkering to please their palates.
November 6, 2013
Ramon O
Rated 5 out of 5
TASTES LIKE A REGULAR BEER
Not sure what happened to Jeremy's batch or how he kegged or bottled it but I made this and then kegged it.

I LOVE this beer! It is the first home beer kit that I have tried (I've tried a total of four so far) that does not have that under lying bitter taste that I believe may come from the sorghum? You know the one I am talking about if you have tried GF beer. This beer tastes crisp and is very clear. It is a very refreshing, lighter tasting beer. Perfect for a summer beer.

That being said if you have never made beer before the instructions provided are too generic and not specific to this type of beer. I would consider my husband and I well practiced home brewers and were able to use our past knowledge to fill in the blanks.

I am buying my GF Honey Ale kit from More Beer. It is AWESOME and I am spreading the word!!

September 29, 2013
kbtlsk8
Rated 3 out of 5
Made this beer for my wife.
This beer was very tart and light in body. My wife is Gluten Free and she wanted me to make this for her. She even thought it tasted a bit strange. The Amber ale is a better kit. I would like to see a dark ale like a stout come out.
September 16, 2013
Jeremy M