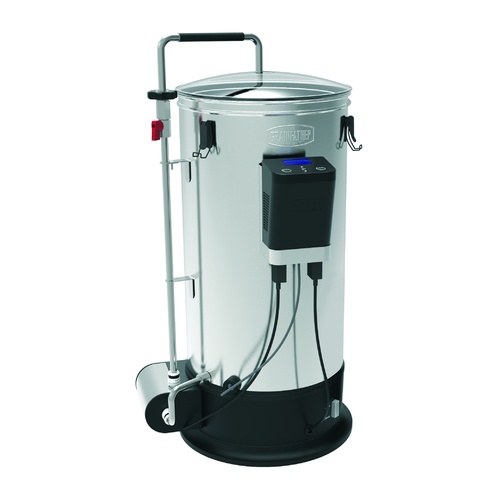 The GrainFather is an all in one Brewing System with a hefty feature set and an economical price tag.  The GrainFather has a small footprint, but will brew five gallons of beer from all grain using household 110-120V power.  Mashing takes place in the inner Stainless basket, and recirculates through the perforated plate (also SS!), resulting in great efficiency and clarity.  This unit also includes a counterflow chiller for cooling wort post boil.

Use the Connect Control Box in conjunction with the Connect App (and the recipe creator coming soon) for the ultimate brewing experience. The control box has Bluetooth connection to your mobile device so it can be controlled remotely. This allows you to multitask or simply relax while brewing and then be alerted when to return to your next step.

Reviews
Powered by TurnTo
Review More Purchases | My Posts
4.6 / 5.0
8 Reviews
5 Stars
4 Stars
3 Stars
2 Stars
1 Star
6
1
1
0
0
Rated 5 out of 5
A review on Warranty
The Grainfather is and amazing brewing system. It has allowed me to hone in on my brewing process. I have put in about 30 brews in the last year. The only issue I had was the controller went out. The outlet that the heating element plugs into burned out. I started a ticket with Morebeer and within a few emails the warranty was approved by Grainfather and they are sending out a new controller as I write this review.

Great product and great customer service what else could I ask for.
November 11, 2020
Michael Becker
Purchased
over 3 years ago
Rated 5 out of 5
Very pleased with GF-Connect
Worth every penny! Bluetooth connection alerts you at every step of the brew. Downloading the recipe to your computer and phone provides many benefits. Controller placement at top is a plus. Multitude of Youtube presenters creates more confidence in setup and use. From a former Brewie user who couldn't find a repair facility, I heartily recommend GF. Only con I can think of is lifting out the heavy grain basket after mashing. I also purchased and recommend the Digiboil heater for the sparge water -- it's a time-saver. Hope this helps.
December 22, 2019
Harry Price
Purchased
over 3 years ago
Rated 5 out of 5
Awesome machine
I love this machine so much. Quick tip buy a dolly to roll it around on
June 28, 2019
scott hoppel
Purchased
over 3 years ago
Rated 5 out of 5
Awesome compact brewing system!
Great little brewing system! Bought this because I live in a high rise apartment, so propane or large multi-vessel systems are not an option. Despite being compact, it brews great! My first batch was a traditional Hefeweizen. I added rice hulls because of the large wheat content, and had no trouble with a stuck sparge. The pump and constant heating element effectively makes this a RIMS system. It takes a little time to heat 6 gallons of mash from a rest at, say 110 degF, to 152...I think mine took around 15-20min. But it doesn't feel "underpowered" like some have said (remember, it's only 1600W vs 2000W). I do have the graincoat, so I can't speak to the "bare" Grainfather, but I would recommend the added insulation, especially with the US model.

The assembly and instructional videos provided on YouTube are great, and should definitely be viewed before the first brew day. It isn't terribly complex, but some of the piping and how to use them isn't immediately obvious without seeing the explanation.

The temperature consistency was actually very impressive. I double checked with a meat thermometer probe, and they agreed spot on! The controller also does a fantastic job of preemting your target temperature and starts ramping down the heating element power output as you approach your set temperature. You can see the percentage output on the screen, and of course on the app too! It reminds you of every step along the way, both on the controller and in the app. Really makes your brew day easy.

Another great feature is of course the website with recipe tools and calculators (brew.grainfather.com). It estimates the color (EBC) based on your grain bill, as well as original and final gravities, and ABV, and even calorie content! My gravity calculations were actually very close, and the color swatch looks pretty darn close too! It directly drives the controller on brew day to simplify the process, but you can customize or override basically every aspect as you see fit. For example, I increased my water to grist ratio because I was brewing a wheat beer and had rice hull additions.

One thing I will mention; not really a downside, but an observation. I live in Denver where water boils at 203 degF because of our altitude. There is a setting in the app to account for this. However this means during the boil, it will only apply heat to maintain 203 degF, which results in a fairly weak boil. I was able to simply increase the target temperature to 208 and monitor the increased power output on the screen, until a decent rolling boil was reached. Of course, physics will never allow the temperature to actually really 208, so in this case it "thinks" it hasn't attained a boil, and it will not prompt you for the boil additions. I believe there is an additional setting to increase the power output during boil, without affecting the target temperature, to reach a more rigorous boil, but I have not figured it out yet (only brewed once though). Just something to think about.

One final thought. The counter flow wort chiller is great, and beats an immersion chiller hands down. However, the included tap adapters do not allow the tubing to twist while connecting to your faucet. It really is not physically possible to attach the cooling water inlet tube to your faucet, without first detatching the other end from the wort chiller. Once the blue tube is completely free, you can readily twist it around as you hook up to your faucet. It's easy to take the chiller end out; it's a simple nut that can be finger twisted, and wrench tightened. That being said, I am trying to find a quick connect adapter from Home Depot or Lowes.

Overall, this thing is worth every dollar. I know there are completing similar products from other companies, but I can't imagine they're as thorough or effective/efficient as the Grainfather! The app and website tools are a huge bonus, and really integrate with your controller seemlessly on brew day to make the whole thing a very stress-free and fun process. That means more time to have another beer while watching your mash circulate - mmm, that sweet cereal smell. 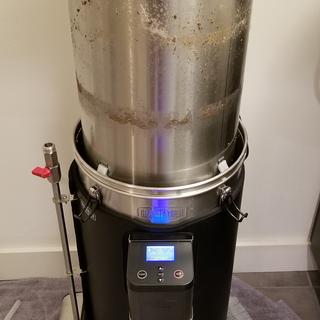 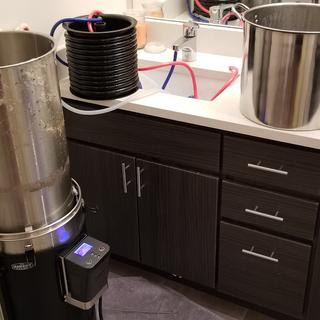 June 1, 2019
John P Buckles
Purchased
over 3 years ago
Response from MoreFlavor
Thank you so much for your feedback. We really appreciate the honesty and value great feedback like this as it helps us improve our products. Cheers!
June 4, 2019
Tyler W Staff
Rated 5 out of 5
So far so good
My Robobrew was dead (broken) right out of the box. Have only had one brew on Grainfather, but so far, so good! Really enjoyed brewing on this thing. My efficiency was low—~60%, but that’s something to work on. I really like that there is an active on-line community for this systems—Reddit and others.
March 11, 2019
Todd G
Purchased
over 3 years ago
Rated 3 out of 5
Needs a better pump, but still a good machine.
All in all a good machine. Pump is way too weak and the clean out cap on the end of the filter fell off during my first brew. It needs to be more securely in place. Controls temperature well and the Bluetooth alerts on your phone are awesome.
November 8, 2018
Ryan D O
Purchased
over 4 years ago
Rated 5 out of 5
Impressive
I've been homebrewing for about 10 years and wanted to make things a little easier. This system did just what it claims. Very well thought out and easy to use. There are a couple things I would incorporate or change to make it a little easier, but all around it's a much easier brew day.
August 31, 2018
Cody S
Purchased
over 4 years ago
Rated 4 out of 5
Fun to brew with.
I bought the Grainfather a few months ago and have 4 brew on it so far. I had a really high opinion about it until tonight. We'll get to that later. I really enjoyed the first 3 brews. It was easy. Cleanup was easy. I could download the recipe to it and it would auto set up the times/steps. I couldn't have been happier. There are things that I would change but we can always mod something to fit it to our style.

Now for tonight. My pump died. It is doa. It failed me right at the end of the boil when I was getting ready to chill. It was a slow trickle then nothing. I back flushed and still nothing. When I was don't thying to figure out what to do to chill this down I took the pump apart to see if it was just clogged. No, its dead.

I emialed Morebeer tonight to see if there is anything that they can do for me. Crossing my fingers. I may have to do this brew all over again.

Other than that. I can't wait to get the pump back and get this back on the road.
May 5, 2018
Mark Bauer
Purchased
over 5 years ago