With 200 Billion Yeast Cells per pack, the Giga Yeast Gold Pitch features nearly double the cell count of other liquid yeast producers. This equals faster starts, better flavors, and more insurance that your beer is going to turn out well. Double the yeast for just a little more money.  Smart brewing.

More On Cell Count
200 Billion cells per pouch means that with one pounch you can attain the gold standard of pitch count. The ideal pitch rate is .75 million yeast cells for every milliter of wort  times degrees plato for nearly any beer you will make. 200 billion yeast cells is also fantastic if you are making 5 gallons of high gravity beer and don't have time to make a starter.  Saves money if you are making 10 gallons and only want to buy one yeast. Getting twice as many cells per pack versus the other brands is also a great idea for mail order shipment, which can be a little tough on liquid yeast.

For best results we always recommend ordering an ice pack with your liquid yeast.

Reviews
Powered by TurnTo
Review More Purchases | My Posts
4.4 / 5.0
37 Reviews
5 Stars
4 Stars
3 Stars
2 Stars
1 Star
26
5
2
2
2
Rated 5 out of 5
Great start will see how it turns out
Took off right away and has been bubbling like crazy for 4 days now
February 5, 2021
Stephen E
Purchased
1 month ago
Rated 5 out of 5
Massive fermentation
It took about 24 hours of no activity and then massive fermentation that continues for a week +. Big upgrade from other liquid yeast I've tried.
December 23, 2020
Mike Zdroik
Purchased
2 months ago
Rated 5 out of 5
Powerful
Uhm... used this to make a Pliny clone. Well, probably shouldn’t have also attempted a pressurized fermentation with it. This thing fermented vigorously and actually blew up my unitank. Powerful stuff, man. Powerful. Fermented out very dry - like 1.003 after only 7 days. 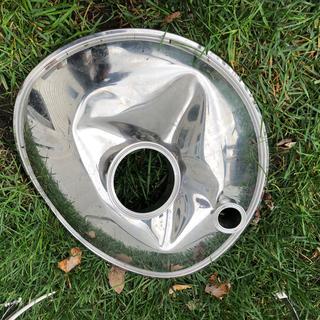 Ka-blewy!
November 1, 2020
Jeffery C
Purchased
4 months ago
Rated 5 out of 5
Nice Flavors, Great Yeast
Adds nice flavors to a nice brew. I used it with the More Beer Sierra Pale Ale clone. This yeast gave a great upgrade to an already great beer.
August 8, 2020
Jeff P
Purchased
7 months ago
Rated 5 out of 5
the goat
this yeast is the goat
August 1, 2020
Michael Formisano
Purchased
10 months ago
Rated 5 out of 5
Glad I tried this
I was a little worried when the packs arrived expanded. I made a 1 liter starter 24 hrs ahead of brew day. No problems. This yeast was finished fermenting in 3 days. A good experience.
July 2, 2020
W H
Purchased
8 months ago
Rated 5 out of 5
Fast acting and aggressive fermentation
This stuff went crazy! Used it on the Pliny the Elder extract kit. Biggest blow off I’ve ever had in my years of home brewing. Definitely recommend for IPA’s and Double IPA’s, I can’t wait to taste the results in about a week!
May 8, 2020
Aaron Bailey
Purchased
10 months ago
Rated 5 out of 5
Pop this bad boy in and BAM, you got yeast fermenting away. Never need to make these into a starter, they have so much juice they just start rolling through like a freight train.
May 5, 2020
Trevor J G
Purchased
10 months ago
Rated 2 out of 5
Yeast Arrived Post-fermentation
Got my order of ingredients in and to my dismay, the NorCal bag was quite swollen as it had clearly already begun fermenting (I always opt for the ice pack & Mylar bag). Hoping the cell count & viability aren't too badly affected.
April 22, 2020
Michael Ferguson
Purchased
10 months ago
Response from MoreFlavor
Hey so sorry about your experience. Did your batch turn our alright? Sometimes in shipping these very active strains get really excited, and most yeast companies ship the yeast in a medium that allows for them to wake up and pregame without much harm. We want to make sure your batch turned out alright and healthy yeast is always the most important part. Please give us a call at 1-800-600-0033 or email us at info@moreflavor.com so that we can assist you. We are here to help. Cheers!
May 26, 2020
Malcolm MB
Rated 5 out of 5
vigorous fermentation for 3 days very good
vigorous fermentation for 3 days very good . Smells fruity haven't tasted it yet but betting it going to be a good one.
April 21, 2020
john k
Purchased
10 months ago
Rated 5 out of 5
Great yeast.
Yeast package dated February, purchase in March. Pitched 2 packages into my 10 gallon batch of IPA, without a starter. Pitched at 1pm on Saturday and when I checked at 8am Sunday it was already active. I was holding the temp at the lower end of the range, around 65 F. By mid day Sunday fermentation was highly active and continued for 3-4 days.

I made a quick starter while I brewed and this stuff took off so furiously it blew the airlock full of foam within 14 hrs!

The beer is a Pliney style double, it is just about done and tastes amazing. Will be a solid %8.
January 12, 2018
Ride monger
Purchased
over 3 years ago
Rated 1 out of 5
watch the date on your yeast
i'm not blaming the yeast here, just mind the date on the package.
I got one with date November 21st (arrived at my house around Feb. 1st).
I emailed gigayeast and they said use it within 3 months otherwise get a starter going. I chose to pitch it yesterday without starter because i'm lazy (that makes it around 2 months and 3 weeks old). So far it seems like i made a bad decision and i'm gonna need some backup yeast.
February 15, 2017
Tom
Rated 3 out of 5
Good, but.....
The yeast itself seems to be chugging away just fine but I was disappointed by the age of the yeast. I had gotten the gigayeast due to it's higher cell count. While Morebeer does a great job in turning over the White labs it seems this moves slower. My White labs kolsh yeast was only about a week old while this NorCal 1 was almost 3 months old. According to Beersmith that made about a 48% viability which essentially made it equal to White labs at a higher cost.
June 6, 2016
Joseph P
Rated 4 out of 5
Nice
Direct pitch into a 5 gallon batch. I'm not overly concerned about a slower start but this yeast finished nice and clean. Nor Cal is the way to go for a reliable house strain.
February 26, 2016
Dan M
Rated 1 out of 5
DOA
I wanted to leave an honest review of this yeast. Sadly it's been 37 hours since pitching in a 1.065 IPA and there is no activity whatsoever. Not even a slight krausen like it would if it was aslow starter. Temp has held steady at 67 since pitching. I have never had a lag this long when pitching 200 billion cells. Either this package was subjected to heat high enough to kill virtually all the cells or their claimed cell count is WAY off. I will not be using Gigayeast again.

October 26, 2015
Dale M
Rated 4 out of 5
Slow starter
I made a 1L starter for this yeast to be pitched in 5 gallons of 1.060 beer. It was about 48 hours before I saw any fermentation starting. This is the slowest I have seen with making a starter. I have the ferm chamber set at 68*F. I have yet to taste the finished product, but I wanted to let others know about the lag time so they don't worry about dead yeast. Hope this helps. I will update after the fermentation is complete.
July 20, 2015
Jeff G
Rated 5 out of 5
Giga yeast
Second 10 gal. batch with this excellent strain. No starter just pitched one pack with a little yeast nutrient. Starting gravity of 1.063 fermented down to 1.06 in four days! Best yeast ever and I've been brewing since 1992.
June 2, 2015
tim w
Rated 5 out of 5
The best yeast I've used so far
By far the best yeast I've used so far. Didn't make a starter and directly pitched in a IPA recipe that resulted in 7%. So clean and smooth, very very nice. I prefer this over the Vermont strain and I'm a Northeast kind of guy. This yeast just lets every hop and malt attribute come through completely, which is unlike anything I've used before. It is now my house strain, no question. Seems to floc better than the Giga Vermont and cleans up much more efficiently. The Vermont strain is awesome too but I lean towards Nor Cal when I want to nail it every time.
May 8, 2015
Erock
Rated 5 out of 5
Fantastic Yeast
Did a 10 gallon batch of Blind Pig. We split the batch into two 5 gallon fermenters. In #1 we used the GigaYeast NorCal and made a starter. In the other we pitched 2 vials of WLP001. I have to say all of us enjoyed the flavor of the batch with GigaYeast over the White Labs. It was a touch sweeter and the white labs had a more pronounced alcohol taste. Both batches blew past their target FG by a few points.
March 2, 2015
Mike