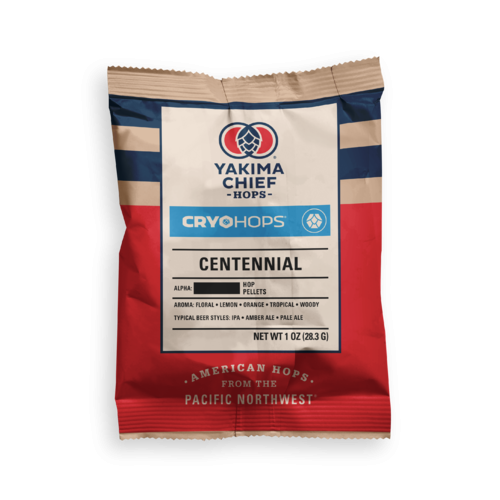 Bred in 1974 and released by Washington State University in 1990, Centennial is an aroma-type cultivar that has found favor as one of the most popular varieties in craft brewing. It is often referred to as a super-Cascade (containing nearly double the alpha content) and can be used for bittering purposes. Centennial is a diploid cross between Brewer’s Gold and a USDA male.

Cryo Hops® provide brewers with the ability to get gigantic hop character while reducing astringent and unpleasant vegetal flavors. With a substantially higher oil and resin content, LupuLN2 powder offers up all the flavor and aroma of a heavily hopped beer, but with a significanly reduced grassy character. Additionally, the lower dosage rate of the concentrated powder reduces the volume of trub and therefore, kettle loss. Using Cryo Hops® you will net more beer that is clearer!

Typical usage of Cryo Hops® would be roughly 50% of pellets. LupuLN2 powder can be used in any application where traditional hop products are utilized, including: Bittering, Kettle, Whirlpool and even direct to the fermentor.  It is suggested that you use Cryo Hops® as late additions, in the whirlpool or dry hop, as the volatile aromatic compounds will be driven off if added early in the boil.

Cryo Hops® are an innovative hop product that is made by separating the lupulin from the hop flower using cryogenic processing. The result is a product with twice the potency of T90 pellets, with reduced astringency and vegetative material.

Note: These hops come pelletized. The powder is compressed into pellet form to make handling easier.