BrewEssence Sensory Training kits are designed and manufactured to provide an industry-leading standard of accuracy and ease-of-use to the process of sensory analysis training across a wide variety of flavors and aromas commonly found in beer. The liquid format of BrewEssence Sensory Training Kits allows for easy preparation of spiked beer suitable for training groups of any size. The compounds can be used for a variety of purposes including preparation for beer judging, use in brewery taste panel management programs, and towards studying for successful completion of various beer certification programs.

Sensory Analysis
In the science of sensory analysis, we use our senses to measure the individual characteristics of products we consume as a vital part of a quality assurance programs. In the brewing industry, taste panel members are trained to accurately identify flavors, aromas and tactile sensations using a range of food-safe chemical compounds that are commonly found in beer.

BrewEssence sensory kits contain ampoules of spiking compounds representing some of the most important flavors found in beer, with each ampoule formulated to allow for easy identification of its specific compound when mixed and served to tasters. Each time a spiked beer is evaluated, the taster will compare it to a sample of the same variety of beer that has nothing added to it, referred to as a control sample. Having a control sample to compare against each spiked sample allows the taster to more easily identify and describe their perceptions of the spiking compound that is suspended in beer.

Each ampoule from a BrewEssence kit is designed to serve up to 20 people. Since each ampoule is single-use, we highly recommend bringing the kit to your homebrew club or getting a group of brew buddies together to maximize the value of each kit. These kits are a great introduction to sensory training for anyone entering BJCP or Cicerone education programs.

Documents
Community Q&A
Powered by TurnTo
Questions that need answers | My Posts
Start typing your question and we'll check if it was already asked and answered. Learn More
Do not include HTML, links, references to other stores, pricing or contact info.
My question is about:

Reviews
Powered by TurnTo
Review More Purchases | My Posts
5.0 / 5.0
2 Reviews
5 Stars
4 Stars
3 Stars
2 Stars
1 Star
2
0
0
0
0
Rated 5 out of 5
Great for club tasting
Bought the Kit as part of class I ran on off tasting for our BJCP training class in our brew club. Using PBR as a base beer 3 cans to fill 1L volume and able to sample the effects of off flavors.

Interesting DMS and diacetyl actually improved PBR by adding something to it. But we will all never forget papery/oxidized, metallic, bandaid, etc... 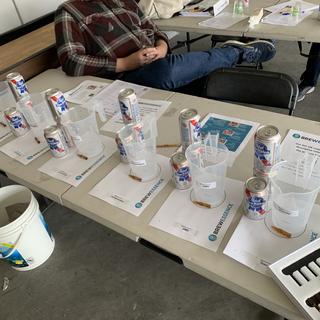 Bay Area Mashers BJCP 2020 training class @ Faction brewing Off Flavors tasting day
April 22, 2020
Sean E C
Purchased
1 year ago
Rated 5 out of 5
Great kit
Did an Off-Flavors tasting at my homebrew store. Everyone agreed that it was a great kit. Learned a lot, realized we have all drunk (and brewed) more flawed, bad beer, than we thought we had. Totally recommend.
March 11, 2020
Bo H
Purchased
1 year ago