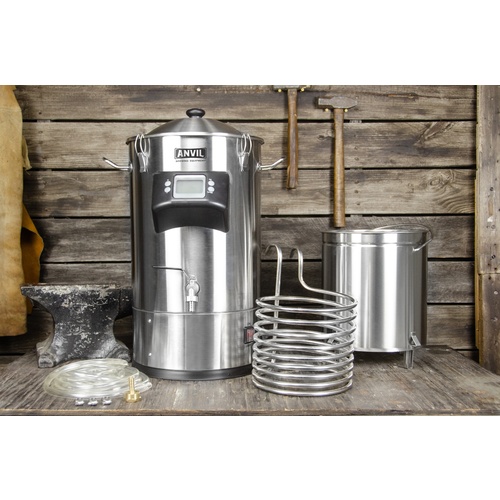 Lowest Price Guarantee, this item has MAP pricing so you can be confident you won't find it for less.

Caution! Do not CLAMP the lid in place while boiling. The steam buildup can lead to severe burns.  The lid should only be clamped when used for distillation. Read all instructions and practice safe brewing.

Reviews
Powered by TurnTo
Review More Purchases | My Posts
5.0 / 5.0
7 Reviews
5 Stars
4 Stars
3 Stars
2 Stars
1 Star
7
0
0
0
0
Rated 5 out of 5
Love it. Perfect for making small batches.
July 28, 2021
Robert C
Purchased
1 year ago
Rated 5 out of 5
Great item for the price !
We love it ! Easy to use , easy clean up . Just what we wanted .
March 22, 2021
Teena K
Purchased
1 year ago
Rated 5 out of 5
Just Right
It's the perfect size for my brewing needs. Great quality.
December 6, 2020
William M
Purchased
over 2 years ago
Rated 5 out of 5
Great product
Great product, very high quality. Everything fits inside the foundry when your done. Instructions are so well done. Even gives water chemistry suggestions. Have done two recipes using water chemistry table with distilled water. Both have been in the 5.2-5.6 range when checked with my ph meter.
May 10, 2020
Ryan c
Purchased
over 2 years ago
Rated 5 out of 5
One of the best investments in brewing equipment I’ve made
May 9, 2020
Zachary Outlaw
Purchased
over 2 years ago
Rated 5 out of 5
Recommended
Simplifies the process and shortens my brew day. Allows me to brew more batches and try new recipes. Brew house and mash efficiencies are good. And I’ll free up some garage space but getting rid of my propane/kettle setup.
January 12, 2020
Eric A
Purchased
over 3 years ago
Rated 5 out of 5
Couldn't be happier!
I've brewed with my 6.5 gallon Anvil Foundry twice now, and overall, I really couldn't be happier with the results! I'd wanted to make the switch to smaller batch sizes for a while now, but it's hard to find quality equipment at a price that made it worthwhile to change out all of the gear I'd need to do it. So I was very excited when I saw that Anvil was releasing this 6.5 gallon system. I went ahead and ordered the version with the recirculation kit. I won't go into all the specs of the system, those are in the manual. I'll just share my experience with it.

First, I found the unit to be packaged well. The one issue I had upon unboxing it is that one of the legs on the grain basket had come off. While I could have still brewed with it on 3 legs, I emailed Anvil immediately with a picture of the missing leg, and they sent out a replacement immediately. So far, the replacement has held up fine. While I don't expect any further issues, it’s nice knowing that the support team at Anvil is ready to stand behind their products.

For my first beer, I chose to do a simple pale ale with Centennial hops, just to shake down the system. I chose to do a no-sparge brew, and I followed the instructions in the manual for determining the amount water and the strike temperature I'd need.

I set everything up in my garage the night before, added my water and brewing salts, then set the Foundry to start heating at 6:00am the next morning. When I was ready to start brewing at 7am, I found that the unit was running and was right at the strike temperature I'd set. I then set the temperature to my desired mash temp of 150F and mashed in. Anvil says that the basket will hold a maximum of 8 lbs of grain. I managed to get 8.25 lbs in it, and I think that was about the maximum it would hold. I then set up the recirculation pump, waited 10 minutes for the mash to settle in, and started the pump. It's a good idea to have the recirculation clamp tightened down before you start the pump. That way you can avoid sucking all the grain to the bottom of the basket and getting a stuck mash. once the pump was running and set the way I liked it, I walked away for an hour and let the mash run it's course. When I came back, I found that I had very clear wort running through the system, and the mash temperature was still right at my set point. At this point, I shut off the pump, closed the ball valve, and pulled up the grain basket to let it drain. Again, everything went perfectly and I had no problems with the mash getting stuck. My mash efficiency was 71%, and that is without sparging, so I was very happy with those results! After a 1-hour boil, I achieved an OG of 1.063 with about 3.25 gallons of finished wort in the Foundry, 3 gallons of which I ran off into my fermenter. The quart I left behind was mostly trub, and the rotating ball valve made it very easy to avoid pulling the trub into the fermenter.

On to the boil. I set the Foundry to boil and 100% power as soon as I pulled out the grain basket. I found that using 120v power, it took about 40 minutes to reach a boil. While that is kind of a long time, the nice thing is that I didn't have to stand there and watch it constantly, and it gave me time to toss the spent grains and clean up the pump and grain basket. By the time the boil started, all of the mashing equipment was cleaned and put away. Also, I'm okay with the extra time since I saved time by not sparging.

With the 120v setup, I was able to a gently rolling boil with a total boil volume of about 3.75 gallons. It was definitely vigorous enough in my opinion. You could switch to 240v and I'm sure you'd get an extremely vigorous boil. I had actually, planned to run it at 240, but after two brews at 120v, I really don't see how it would be worth the trouble and expense of adding a 240v outlet in my garage.

I was ready to not love the included chiller and already had plans to replace it. While it's not the best chiller out there, for the price, I'd have to say I'm very happy with it and don't plan to replace it. I live in the southeast, and in the summer, my tap water is a toasty 81 degrees. Running the chiller with some occasional stirring, I was able to get down to 90 degrees in about 10 minutes. It took 20 minutes to get down to 84 degrees, at which point I shut down the chiller and ran the beer off into a 5-gallon corny keg that I use as a fermenter.

Clean up afterward was super easy! I didn't have any scorching on the bottom. I rinsed out the Foundry and wiped down the walls with a cloth, then add a couple gallons of water and with some PBW and recirculated with the pump for about 20 minutes, then rinsed it all out and let it dry. The chiller was just rinsed off with hot tap water and allowed to dry. From start to finish, my entire brew day took about 3.75 hours.

As I said, overall, I couldn't be happier with the quality, features, and the support of this system!
July 9, 2019
William Howard
Response from MoreFlavor
Thank you so much for your feedback. We really appreciate the honesty and value great feedback like this as it helps us improve our products. Cheers!
July 10, 2019
Tyler W Staff