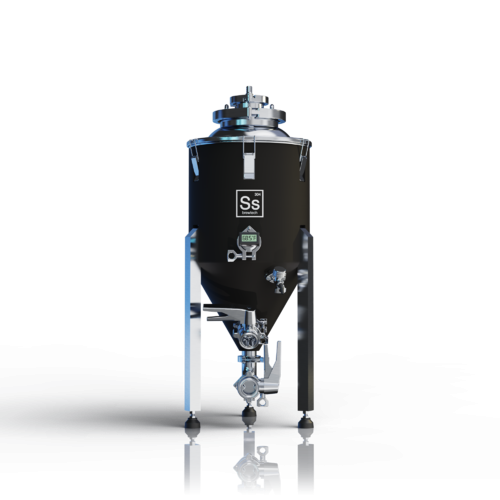 FE822
$649.00 & FREE Shipping on orders over $59.
Drop Ship: This product will ship directly from the supplier. Delivery may take 1–4 weeks depending on the vendor. Blichmann products are typically shipped in under a week.

Updating the iconic series of Chronical fermenters is not something Ss took lightly. The Chronical was a product launched in the earliest days of Ss Brewtech. It, along with the Brewmaster Edition that would join a few years later, has formed a core product line that has elevated the standard of what homebrewers have come to expect from a cylindro-conical vessel, and what homebrewed beer could be.

So, with a blank sheet of paper, they went to work designing the ultimate Chronical fermenter. Priority number one was to continue on Ss's mission to elevate every home product they offered to sanitary connections and valves. For the Chronical 2.0 they addressed that by adding a new welded 3/4" TC sampling port, and paired that with an all-new sampling valve based on the Pure Flow sanitary technology. Secondly, Ss redesigned the lid to use the Unitank's lid-mounted cooling coil system, which removes the side-mounted weldless ports from the Chronical BME. The Chronical 2.0's lid-mounted cooling coils extend further down into the fermenter, enabling users to ferment partial batch sizes.

Although Chronical 2.0 is a massive evolutionary leap forward, Ss also stayed true to the product line's core. The full-width lid, a revolution when the original Chronical launched is retained, the pro-inspired 60° cone, and bottom dump port is still here. And last but not least, the ever-popular neoprene jacket from the Chronical Brewmaster Edition is standard on Chronical 2.0.  This means that every Chronical 2.0 has a coil and jacket included as standard.

Ships free to anywhere in the contiguous United States.

Drop Ship: This product will ship directly from the supplier. Delivery may take 1–4 weeks depending on the vendor. Blichmann products are typically shipped in under a week.
Customers Also Purchased

No questions have been asked about this item. Be the first!

Reviews
Powered by TurnTo
Review More Purchases | My Posts
There are no reviews for this item. Write Review