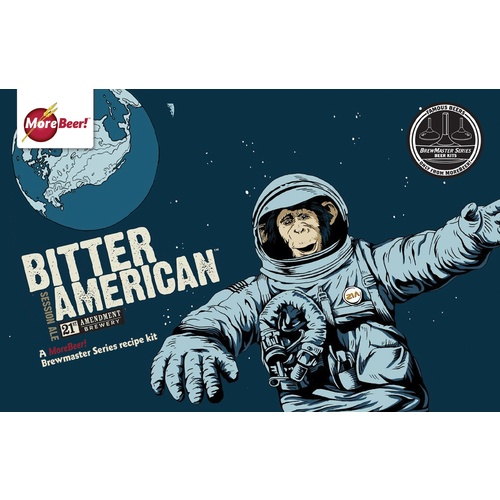 Shaun is known for creating beers that are well-balanced while doing some unique things, such as using watermelon juice in a wheat beer, or oyster shells in an oatmeal stout. His Assistant brewer Jesse created this beer, an easy-drinking pale ale with few bittering hops but giant fistfuls of flavor and aroma hops. This beer has low alcohol and a soft malt backbone with an incredible hop finish - your answer to the hop shortage! Jesse and Shaun recommend using WLP001.

Shaun O'Sullivan of the 21st Amendment, San Francisco, California
Shaun's brewing career started like most in the beer industry - homebrewing. While working at a Southern California law firm, Shaun was spending his time making beers at home. After about 2 years, he not only decided that he wanted to make beer for a living, but that he wanted to open his own place! Shaun moved up to the SF Bay Area to start working at a few local breweries, while taking several brewing courses at UC Davis. Shaun eventually teamed up with his business partner Nicco Freccia, and together, they founded the 21st Amendment Brewery and Restaurant. They are one of the few breweries in the country leading the craft beer canning revolution, canning their "Brew Free or Die" IPA, and their "Hell or High Watermelon", which is an American-style Wheat beer brewed with real watermelon juice. When in San Francisco, visit Shaun at the brewery (563 2nd Street), which is just two blocks from Giants park.

Reviews
Powered by TurnTo
Review More Purchases | My Posts
2.5 / 5.0
2 Reviews
5 Stars
4 Stars
3 Stars
2 Stars
1 Star
0
0
1
1
0
Rated 3 out of 5
Not as good as the extract version
I've brewed the extract version of this beer many times and it's one of my favorites to keep in a keg. The extract version has a very tasty malt backbone, but not particularly hoppy. Then again, I never thought the original was that hoppy either.

I'd say I must have done something wrong, but another reviewer wasn't that happy with his result either. So I can't give it a great review. I'd save time and brew the extract version. It is reliable, forgiving of mistakes, consistent, and tastes great.
October 26, 2016
scott h
Rated 2 out of 5
Not impressed
This was one of my favorite beers from 21A back before they stopped making it (RIP) so I was stoked to give it a shot. I brewed this and hit a good 75% efficiency and brewday went smooth. The aroma never had a hint of hoppiness during fermentation, even after I dry hopped it it didn't really have much of an aroma. Kegged it and been drinking it for over a week and this recipe missed the mark by a lot. The hop flavor was weak and was my main complaint and tasted nothing like the original. I bought this kit in the shop, and if you've been there you can see the kits on the shelf all packaged together. My assumption is that since the hops in the kits are already weighed out and put with the kits themselves, that this killed a lot of their potency due to the heat and whatnot. I'm going to try and brew this batch again, but by buying the ingredients individually instead of as a kit. That way I can get freshly stored hops and see if that's what killed this one. Color was spot on.
August 31, 2016
BrewerBlake