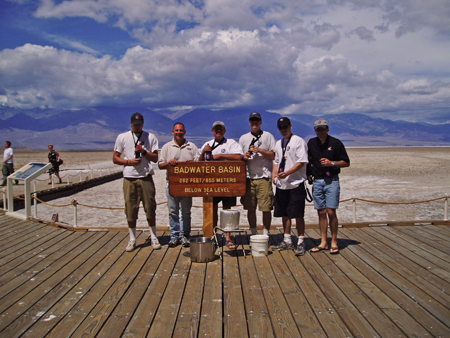 In 1998 Regan Dillon and Olin Schultz of Beer, Beer & More Beer along with Mike Rose and Mike Cullen set the world record for brewing beer at the highest elevation when they fired up an all-grain Pale Ale on the top of Mt. Whitney at 14,491 feet of elevation. In late April 2005, in celebration of MoreBeer's 10th anniversary, we came back to set yet another brewing record. This time we headed in a different direction - down!  On April 28, 2005 Olin Schultz, Darren Schleth, Chris Graham, Regan Dillon, Jason Petros, and Cindy Rae from MoreBeer! along with long time friend and customer Mike Rose descended 282 feet to the lowest point in the Western Hemisphere, a spot called Badwater in California's infamous Death Valley.

We woke up on the morning of the brew to rain beating down on our tents.  Rain is a normally a rarity in Death Valley, where the average rainfall is under 1” per year. The rain soon subsided, we shook off mild hang overs – mandatory for a world record involving beer, and Regan began cooking his famous Atkins diet approved artery cloggers, eggs dropped into a pool of boiling bacon fat.

After soaking up the nutrition we loaded the trucks, broke camp and headed down the valley to our drop off point, Badwater California. The sun came out during the drive down the valley and when we arrived at destination Badwater we were treated to the nearly blinding vision of a huge, pure-white, salt flat framed on both sides by towering mountain ranges. Way up on the side of one of the cliffs overlooking the salt flat, was a sign that read “Sea Level.”

At 10:00 AM we piled out of the trucks with a nervous excitement and perhaps even a case of the brewing jitters. Thoughts of “will I brew up to my own expectations” and “I hope I remember to pull out the hops at the right time” must have been creeping through everyone’s head. But times like these are no time for panicking so we had to stick together. Fortunately Olin had some previous experience and provided a little direction, “Regan you grab the system”, “Darren you grab the grains”, “Jason you grab the lounge chairs”, “Chris you grab the beers.”

Amazingly, the same two-gallon, all-grain, record setting system Regan designed for use on the top of Mt. Whitney was used again for this endeavor. We had also decided to brew the exact same Pale Ale recipe in what will become the first experiment of the affect of altitude on beer flavor.

One of our first concerns were gusty winds traveling up the valley from the south.  As an experienced outdoor brewer knows, wind is not your friend.  However, as usual, Regan had no fear and lit his mini butane camp stove. The decision was made to seek shelter behind a cement wall during the boil, but to venture out to the valley floor for the mash and sparge.

At about 11:00 Mike Rose showed up. It was great to see Mike again because he is such an up-beat, great guy. We immediately started giving him a bad time for no reason because it is very easy to do that with Mike.  However, he halted us in our tracks when he produced three bottles of vintage 1998 Nifty Whitney 1.050 that had been stored cold for seven years (except, according to Mike, for one week in 2001 when his refrigerator was on the blink.) The beer was amazingly crisp, with still evident malt and hop flavors, which was amazing for a Pale Ale this old. The decision was made to save one bottle for the next, yet to be announced brewing record. It is really yet to be thought of, but give us time.

We really had no idea of who was showing up because Regan’s idea of group coordination was to tell anyone who was interested “We’ll meet you in Badwater at 10:00 A.M.” He spent the rest of the day asking unsuspecting tourists “Are you hear for the World Record?”  Most of the tourists were foreigners that did not speak much English so they walked by as quickly as possible. It is not every day that you go to a national landmark and see a bunch of people in the middle of the desert with metal pots, burners, and fermenter contraptions who are all drinking beers that are hanging from their necks. Only in America is this possible.

Anyways, after Mike showed up, and Regan had accosted several tourists with no success, we started the brew and 1.5 gallons of water was heated up to our 165F strike temp. We doughed in our grains and the mash stabilized at 153F. We were brewing beer and it felt good. Damn good.

We hiked our operation out to lowest point in the salts flats. Regan bitched and moaned the whole way. I explained to the group how on Mt. Whitney I never heard a peep out of Regan because he never caught his breath the entire trip. I knew I should have given him something heavy to carry. On this hike, however, it was Darren who was quiet. As Chris and I led the group while carrying the mashtun and boil-kettle I turned to find Darren lugging his six-foot long lounge chair a half-mile out into the desert.

The beer had essentially ‘mashed’ and was complete with the starch to sugar conversion by the time we finally reached our location. As we had done during our brew on Mt. Whitney we put 1 ounce of cascade hops in a bag and placed them in the kettle. During the ‘sparge’ or rinsing of the grains, the wort was allowed to drain onto the hops in a process called ‘First Wort Hopping’.  During first wort hopping some of the aromatic hop oils get bound up with the malt constituents to provide long lasting hop aroma, even without adding any later hops during the brewing or fermenting process. Judging by our results on Whitney and the beers Mike had brought, first wort hopping was a success.

With Darren’s tireless supervision the mash and sparge went flawlessly. However, we did add a pinch of salt from the Valley floor in a spurt of home brewing creativity to give the beer an authentic “Brewed in Death Valley” flavor. Mike Rose, who has some interesting ideas on health, proceeded to then collect and eat some of the raw virgin salt. I remember thinking “We can’t take this guy anywhere!” Don’t worry - If you are reading this it means he probably didn’t die.

We hiked back to our protected cove to proceed with the rest of the boil. From that point on the classic challenge of home brewing presented itself. How to remember what you are doing while drinking said homebrew from previous batch? It was warm and the beer du jour seemed to be high-octane version of Stouts, Barley Wines and Belgians. As normal we persevered, probably because of our intense training and professional backgrounds?

After the boil it was cooling time – a challenge that we had planned for. First we put the kettle containing two gallons of wort into an ice chest and cooled it down to 140F.  We then moved the wort into Regan’s custom designed fermenter. A two gallon bucket complete with insulation, MoreBeer’s weldless cooling unit and a Ranco digital controller to maintain a constant temperature. This entire fermenter ensemble plugged into Regans cigarette lighter and ran off 12 volts via an inverter that converted it to 110 volts. Sometimes in these situations it pays off to be the Galaxy’s foremost supplier of high tech brewing equipment.

When the beer reached 80 degrees, after a couple hours of additional cooling in the fermenter, we pitched a vial of White Labs California Ale yeast.

With two World Records under its belt this little sweetheart of a brew system will be destined to spend its retirement years lounging under glass and spotlight. Once Sotheby's auction house gets wind of this we expect they will stop at nothing to have it.

Once we were all done and the beer was safely tucked away we snapped a few obligatory tourist photos, packed up and headed out the next morning for the Sounthern California's Homebrewer's Festival. On the way we passed a sign (see below) that we thought kind of summed up the fact that a group of homebrewers would actually do this. We snapped what is now an infamous MoreBeer! photo, one which we should really work into more of our marketing efforts.

Cheers and may your brewing take you interesting places like the peaks of Mt Whitney or the Salt Flats of Death Valley!!