Kettle Reactions - The Science of The Boil 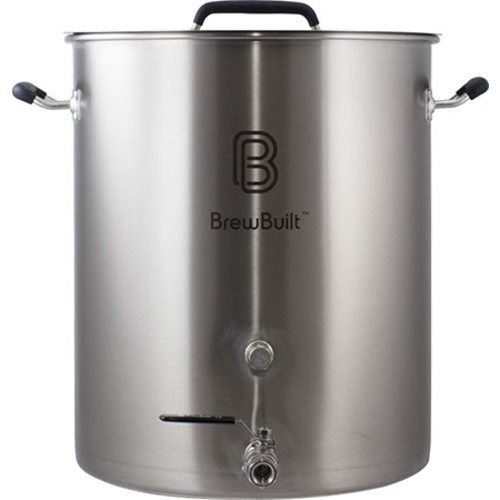 Stepping up to Advanced Techniques

The chemical and physical processes — known collectively as kettle reactions — that are at work in boiling wort are important contributors to beer quality. A basic understanding of kettle reactions will take you a long way in the quest for successful brewing practices.

Wort boiling and knowledgeable handling of hot wort are important to the production of high-quality beer. The physical and chemical processes at work during the boil are collectively referred to as kettle reactions. Many novice extract brewers can trace off-flavors in their beer to negative kettle reactions, primarily excessive oxidation of hot wort and excessive caramelization of highly concentrated wort through browning reactions. With a little forethought, these problems are easily prevented, making possible vast improvements in the finished beer. This installment of “Stepping Up” explores some of these important kettle reactions and provides some simple guidelines for successfully managing them.

Click here to browse some of our top selling brew kettles!

Sterilization of the wort is obviously important; boiling would be required even if only to ensure contaminant-free fermentables. Some bacterial and fungal enzymes that may be present in the mash can actually survive up to temperatures as high as 200 °F (93 °C). Certainly these are exceptions, and not all enzymes can survive to those temperatures, but boiling ensures that any remaining enzyme systems in the wort are deactivated. This effect is especially important considering that amylase enzymes remain active in mashes that are not heated to 170 °F (76 °C) before lautering.

Reduction of wort volume is an important factor in determining the actual original wort gravity and final beer gravity. The length of the boil can be used to control these numbers.

Hop utilization is another key aspect of wort boiling. Although much has been written on this subject, the basics can be summarized as follows: The raw hop bittering compounds, alpha acids, are isomerized through the boiling action into iso-alpha-acids, which are much more soluble in wort. The amount of hop bitterness realized in the kettle is based on the utilization factor and the amount of raw alpha acids in the hops. Pellets used in a vigorous boil for 45–60 min will result in 30–40% utilization factors, whereas with whole hops utilization factors are closer to 20–25%.

The coagulation and precipitation of proteins is a key factor in producing clear, stable beer. Boiling the wort drives off volatile wort compounds, one of the most important of which is SMM, the precursor to DMS. DMS can impart cooked corn aromas and flavors to beer and is generally undesirable at high levels. Last, boiling the wort decreases its pH by about 0.2 as a result of the action of calcium and magnesium ions, residual alkalinity, and the formation of Maillard products and by the addition of bittering substances.

Beer stability is ensured by practicing brewhouse procedures that minimize the uptake of oxygen (which leaves the cast-out wort in a “reduced” state).

Let’s consider some processes and actions that brewers can take to improve final beer quality.

Duration of the boil: Extract brewers should boil the wort 45–60 min to allow sufficient hop utilization. The boil period for an all-grain beer should be at least 70 min and is typically 90 min. Boil times of 2 h or longer are usually reserved for special beers, such as strong Scottish ales or small beers made from the second runnings of a mash. Longer boil times increase the amount of hop bitterness, although in practice boiling hops for periods in excess of 1 h will not significantly increase bitterness. Wort should be boiled for 10–30 min before the first hopping to allow time for some of the hot break (coagulated, precipitated proteins) to form.

Vigor of the boil: In general, a strong, rolling boil is desirable. Stronger boils evaporate more wort per hour, and a target reduction of 5–10%/h is typical. It is a good idea to measure the evaporation rate so that you can estimate the gravity of the cast-out wort based on the profile of the initial kettle wort. If the kettle specific gravity is 12 °P (1.048) at the start of the boil and the evaporation rate is 10%/h, then the gravity of the cast-out wort after a 90-min boil can be calculated as follows:

The 1.8 °P increase results in an actual original gravity of 13.8 °P. This information can be very useful in some beer recipes and when using kettle adjuncts such as candy sugar.

Browning reactions: Also known as Maillard reactions, browning reactions is the term used to describe the chemical change that occurs when a sugar solution is heated. The chemistry of the reaction begins when amino acids (liberated during mashing) and reducing sugars combine under heat to produce melanoidins, which add color and body to beer. These reactions occur during the malting process of some grains as well as in the kettle and can be very beneficial in some styles, such as Bock beers. Flavors associated with melanoidins include toffy, nutty, malty, and biscuity.

Maillard reactions are also responsible for thick and heavy flavors sometimes found in extract-based beers that are boiled in concentrated form. Many extract brewers use a brew kettle that can only boil 25–50% of the final beer volume. Termed a concentrated boil, the melanoidin reactions are more pronounced in worts of such high gravity. To make matters worse, extract manufacturers increase the melanoidin concentration during production, and the oxidation of melanoidins can continue during storage. This is sometimes the cause of the so-called “extract tang.” Remedies include using a full wort boil and the lightest extracts obtainable.

Trub formation and removal: Throughout the boil, proteins carried over from the mashing and lautering process will coagulate into larger clumps of hot break. Hot break, or trub, is composed of proteins and nitrogen constituents that interact with carbohydrates and polyphenols. The formation of trub is favorably influenced by the action of tannins from both malt and hops. Hot break will form naturally during the boil, but the coagulation of break material into larger flocs is assisted by the addition of Irish moss (a form of red seaweed, composed of carrageenin).

When using Irish moss, it is important to rehydrate the material before adding it to the kettle. For a 10-gal batch, combine 1 tbsp Irish moss with water and let stand overnight or for several hours. Add it at knockout, or within 15 min of knockout. The use of coagulants is a matter of brewer’s choice, and in some breweries beers of star brilliance can be obtained without it. Crystal clarity in such cases is based on the entire brewing process, from malt choice to lagering time, so brewers should make their own decisions as to the necessity of coagulants.

Some of the proteins formed early in the boil will rise to the surface of the kettle; these may be skimmed off if desired. The bulk of the hot break will remain in suspension in the kettle.

It is highly beneficial to prevent the carryover of hot break to the fermentor. The methods used to prevent this carryover depend largely on brewery design, but it is wise to make every reasonable effort to prevent transfer of the majority of the hot break. The two most common methods of hot trub separation are the whirlpool method and the hop back and other straining methods.

A hop back provides another excellent method of filtering hot break and whole hops from the kettle. Hop backs were originally fabricated for use with whole-hop breweries, but they work very well with pellets, provided the false bottom of the hop back is lined with a bed of whole hops. Hop backs can be made to take wort in-line from the kettle ferrule, and then the outlet can be fed through a counter-flow chiller. Trub is effectively left on the top layers of the hop bed.

An added benefit of the hop back is increased hop aroma and flavor in the cast-out beer. This benefit can be a disadvantage in beer styles that do not call for hop flavor and aroma. If this is the case, don’t add additional hops to the hop back. Use only the boiled hops from the kettle to form the filter bed, or use hops with low aromatics.

To summarize, a lot of science goes on in the kettle when the wort is boiling. The brewer’s raw materials and the kettle reactions involving these materials during the boil provide the basis for the final beer composition. Trub formation and hop isomerization are of fundamental importance to any brewer. Maillard reactions are inevitable and largely desirable, and the carryover of melanoidins to the fermentor in their reduced form is crucial to long-term beer stability.