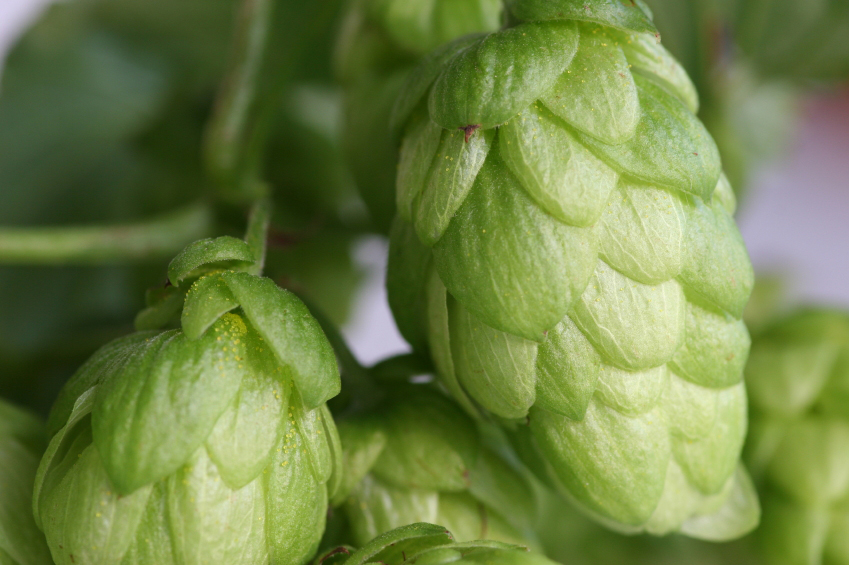 Question: Hops and IBUs: In figuring your IBUs, does batch size make a difference (say 10-gaI versus 10-bbl)? The formula I use is from the Zymurgy hops special issue:

where U = utilization, A = α-acid content, Wgr = weight in grams, VL = volume in liters, and GA = gravity adjustment. The V above: is it the starting volume or the final volume?

Dave Miller: The short answer to your first question is, yes, batch size makes a difference. Small-scale brewers often find that moving to a different batch size alters their hop utilization. And to answer your second question: Utilization usually is calculated based on the volume of wort in the kettle at the end of the boil. This practice makes it easier to compare figures from different breweries because losses at later stages in the process can vary tremendously.

I sense another question lurking behind your first, though: “If batch size makes a difference, how does one compensate for it? Is there another term that can be inserted into the formula?” The answer to that, alas, is no.

Strictly speaking, an IBU is one part per million of isohumulone. It is a quantity that must be measured directly in the finished beer. All of the formulas published in the home brewing literature — and you have no doubt noticed that there are several, and that they give varied results — at best will allow you to make a rough estimate of a beer’s IBUs.

Remember that all of these formulas include a term for utilization percentage. In some formulas, a fixed percentage is built in; in others, you must supply it. Either way, it’s there. The only way to plug an accurate number into that slot is to measure the actual IBUs in a laboratory. If you can do that with several test brews, you can then predict the IBUs of future batches — assuming of course that you do not change your brewing techniques or equipment.

The problem is that batch size is far from the only variable that can affect utilization. Some other variables include the following:

·         Form of hops. Pellets give better utilization than whole cones. Sometimes a factor is included to account for this in the formulas.

·         Time of hop boil. All formulas include a factor to compensate for this.

·         Agitation in the boil. Kettle configuration and material, placement of the heat source, and numerous other factors influence how much rolling action you get during the boil. There is no way to figure in a factor for this because it is unknown to the formula writer and is difficult to measure in any case.

·         Time of hot stand after boil and before cooling. This again is unknown to the formula writer.

·         Agitation after the boil. If the wort is whirlpooled with the hops, even the finish hops will yield a respectable percentage of their bitterness. Again, there is no way to figure in this factor.

·         Losses during fermentation. Yeast cells adsorb hop bitterness, as a simple taste test proves. The degree of adsorption depends on a multitude of factors, not the least of which is the amount of cell growth.

You may ask, what in the world is going on here? Other things being equal, you would expect a little better utilization in the wheat ale because of the lower gravity, but in no way could that make up for the difference in boil times. Remember, by the article you are following, we should be getting only about 5% utilization from our finish hops.

The answer (in part) is that our kettle also is a whirlpool, and we whirlpool the wort for 20 min and then let it settle for another 10-15 min before knocking out. Obviously, 30 min of agitation at near-boiling is almost as effective as boiling for a similar period.

OK, this is a gross example, and you might argue that you could still use the formula if you simply include the 30-min whirlpool period in the total boil time. But that still will not get you anywhere near an accurate estimate. Figuring the finish hops as a 30-min boil and the first addition as 1 h, we should (again by the article you are following) get an average utilization of 30 + 15.3/2 = 22.7% — significantly below the actual figure.

Every published formula I have seen for estimating IBUs has more than an outside chance of giving you a grossly inaccurate estimate of the bitterness in your finished beer. The brewing process simply contains too many variables, and some of them are nearly impossible to quantify. Whenever a brewer tells me, “This beer has so many IBUs,” I have to ask in turn, “What lab did the measurement?” There is a real need for a good, reasonably priced lab service that would measure bitterness for small-scale brewers.

In any case, I see no advantage in publishing recipes that require working backwards from an IBU figure through a complex formula to derive a hop rate. The simple old AAU (α-acid unit) or HBU (homebrew bitterness unit) system is just as likely to get you in the ballpark. Furthermore, brewing encompasses art as well as science, and setting bitterness falls on the art side of the process. You have to go by taste. All the calculations are only a means to let you use your knowledge and experience to get a beer that tastes right — the right amount of bitterness, in this case — in as few trials as possible, and then to repeat or fine-tune the flavor of that beer.

I hope it doesn’t sound like old technical Dave is getting arty and muddle-headed. Flavor is the reason we brew and drink beer. Even the biggest and most technically proficient brewers in the world rely on taste panels as the ultimate analytical instrument. Numbers do not tell the whole story; they are only a means to an end. So if we cannot fix a recipe entirely by formulas, it’s not the end of the world. We can still brew great beer.