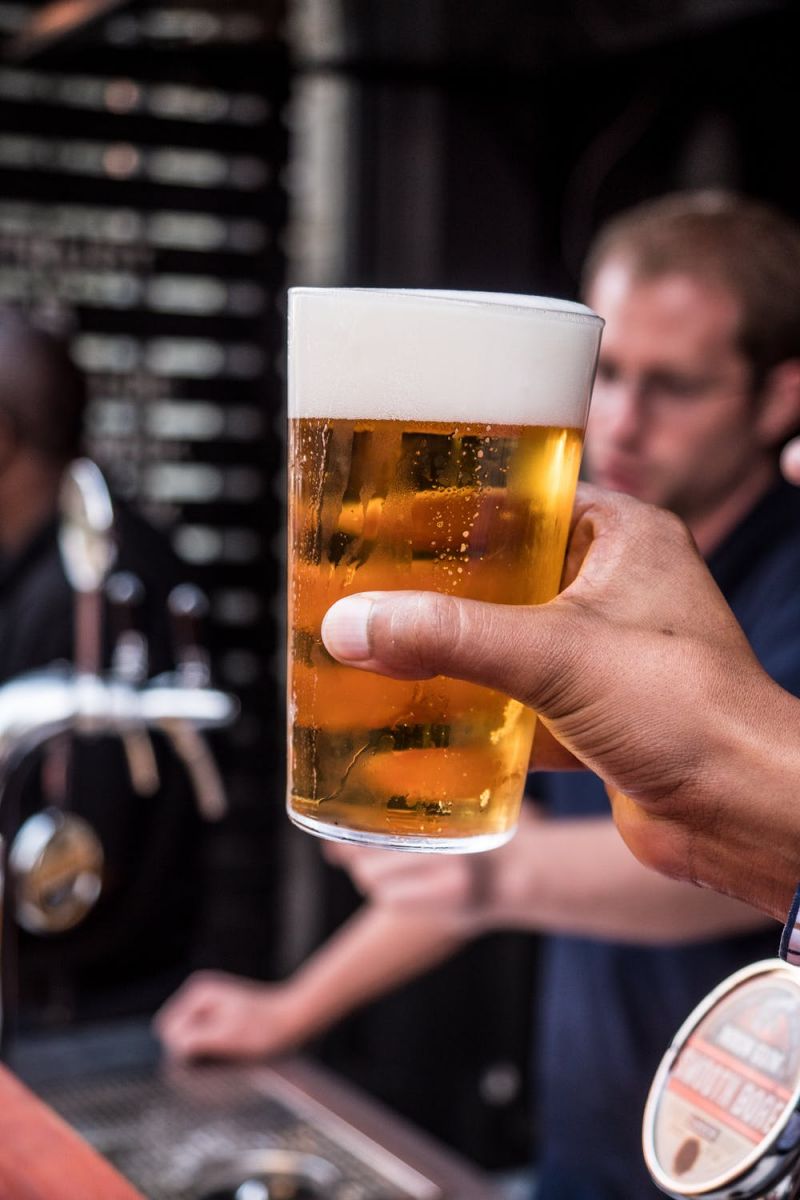 In an ideal world, our home-brewed beer should remain clear, develop a nice, stable head, and have a consistent flavor profile. In the real world, it takes a few simple techniques to produce ideal-world beers.

One of the first things that our friends who are not home brewers notice about our hand-crafted product is that it’s sometimes not as clear as the “professional” beer they’re used to drinking. Major-brand advertisers have not missed the opportunity — some have publicly derided homebrew’s lack of clarity. For the uninitiated, these perceptions often cause preconceived sensory biases, especially when a novice taster equates clarity with quality.

Although the struggle against hazes in your homebrew depends largely upon the importance you attach to it, it is nevertheless important to understand the methods that can be used to clear your beer. Fining and cold conditioning are two of the ways that this problem can be dealt with on a home-brewing level.

It is important to note that the most common type of haze — chill haze, named for its appearance only when the beer is chilled — has no effect on the beer’s flavor. That fact is worth considering carefully before embarking on a mission to eliminate hazes from your finished beer.

The Two Types of Haze

The hazy appearance of finished beer has many causes, but these causes can all be categorized into roughly two groups, biological and nonbiological.

Little can be done about biological hazes except to learn from your mistakes and try to correct the problem in future batches. Biological hazes are easily identified because they affect the flavor and aroma of the beer in a very short time. Most of these can be attributed to poor sanitation at some point in your production process. Tighten up your cleaning and sanitation practices, and the problem will most likely disappear with yout next batch.

Make sure your homebrew equipment is clean and sanitary, browse our selection of PBW, Star San, SaniClean and more!

Nonbioiogical hazes: Nonbiological hazes are much more process-dependent. They are produced when proteins (present in malt) and polyphenols (also called tannins and present in malt and hops) combine to form a protein-polyphenol complex as the beer is chilled. Chill haze forms readily at about 32–45 °F (0–7 °C) and typically dissipates when the beer warms up to 68 °F (20 °C). This haze is temporary because the bonds between the proteins and polyphenols are weak and easily broken. Temporary hazes can become permanent, however, through oxidation reactions that increase the strength of these bonds — yet another reason to eliminate or at least minimize the aeration of finished beer.

Whether you are an extract, extract and specialty grain, partial-mash, or all-grain brewer, you can take preventive measures to minimize or eliminate these comment-provoking hazes. Although all-grain brewing practices can greatly affect the haze-forming constituents in beer, all-grain brewing is beyond the scope of this column, so I confine the discussion to the simpler extract and extract and partial mash methods.

In an ideal world, our home-brewed beer should remain clear, develop a nice, stable head, and have a consistent flavor profile. These characteristics depend largely on the presence or absence of the protein half of the haze-forming protein–polyphenol complexes. Medium-sized proteins give beer its body and mouthfeel and contribute to head formation and retention; thus, they are necessary for overall balance in our beers. It is therefore essential that we retain enough medium-sized proteins to keep all the good things that they have to offer while at the same time eliminating enough of them, or the polyphenol part of the haze-forming complex, to ensure a clear, stable product.

Click here to check out our selection of Extract and All-Grain Beer Recipe Kits!

“Finings” and How They Work

The term fining is used by brewers to describe the forced clarification process. Fining increases the brightness of the finished beer by removing suspended yeast and haze-forming proteins and polyphenols. It also shortens aging times by removing excess flavor-destabilizing components from the finished beer.

Some clarifiers, such as the protein-degrading enzyme papain, remain in the finished beer and are considered additives. Others, called processing materials, work by adsorption — yeast cells and haze-forming complexes adhere to the surface of the fining agent and fall out of the beer before final packaging. Adsorption is an active system because the electrical “charge” of the fining agent is opposite that of the yeast, proteins, or polyphenols. This opposition of charges creates a strong attraction between the fining agent and the particular suspended matter that is targeted for removal. The “flocs” that result from this interaction become denser than the surrounding liquid and fall out of suspension.

Because adsorptive finings react by attraction, they must be thoroughly mixed into the green beer to be completely effective. Gentle mixing is the key here, because it is important to prevent unnecessary oxidation of the finished beer.

Browse our selection of finings and clarifiers to improve the clarity of your homebrew!

Before discussing specific fining agents, it is important to examine two very important parts of any clarification process — the boiling and chilling of the wort. These two processes result in what is known as hot break and cold break, respectively. Although they are much more noticeable in all-grain batches, they can also be observed in extract-only recipes.
Among the large number of reactions that take place in the boil, the hot break is among the most important because it effectively reduces, by a large percentage, the amount of haze that forms. During the first 15–20 minutes of the boil, you may notice that small particles start to appear in the previously clear wort. These insoluble precipitates — called hot trub — result from the coagulation of proteins. Removing the hot trub is an important step in removing excess proteins that may contribute to chill hazes in the finished beer.
At the end of the boil, rapidly chilling the wort produces the cold break, or cold trub, which consists of the same components that make up chill haze; that is, proteins and protein–polyphenol complexes. Any proteins remaining after boiling and chilling can later react with polyphenols to produce cloudy beer. Although the jury is still out on whether to eliminate any cold trub carryover into the fermentor, hot trub removal is considered essential in the brewing procedure.

Kettle finings promote the removal of proteinaceous materials from the wort. They also provide an adhesion site for larger, coagulated proteinaceous particles and other complexes, enhancing the formation of larger, heavier flocs that settle out of the wort faster and produce a tightly packed sedimentation.
Numerous types of copper finings are available. Some of them require subtle changes in the general instructions that follow, but for the most part the main ingredient in these products is Irish moss. Because each brewing system has its idiosyncrasies, I encourage you to try out a few of the kettle coagulants on the market to see which one works best with your particular process and equipment.
Irish moss, a red marine algae, is negatively charged and attracts the positively charged proteins to form larger hot trub particles that sink rapidly at the end of the boil. It comes in both powder and flake forms. I have used both forms with success, though I prefer the flaked form for use in my current brewing setup.
For a 5-gallon batch, soak 1 teaspoon of Irish moss in a cup of warm water and let it rehydrate for at least a few hours before use. I try to remember to do this the night before a brewing session, but I have also started rehydrating it at the beginning of the brewing session with no observable difference in performance. The Irish moss should be added to the boil about 15 minutes before knockout; that is, before turning off the heat source. Recently, I’ve started to experiment with larger quantities (1½ tsp) of Irish moss for those “big” beers whose starting gravities are higher than 1.060 or so. It’s still too early to draw any conclusions. I’d like to hear from those of you with thoughts about this.

So what does all of this boil down to? Basically, to use finings is really an aesthetic decision: Do you want crystal clear home-brewed beer that will dazzle your friends, or are you happy with your beer even though it’s a little cloudy at times? Clarifiers have their place in home brewing, but they are not the be-all and end-all to producing great beer; they are just another tool that you can pull out of your bag of tricks if and when the need arises.
The most important thing to remember when using finings is that the if-this-much-is-good-then-more-should-be-better school of thought definitely does not work here. If you are going to err when using finings, err on the side of underdoing it. You can always adjust the quantity on the next batch to achieve the right balance that will produce a clear, presentable beer that forms and retains a nice, stable head.