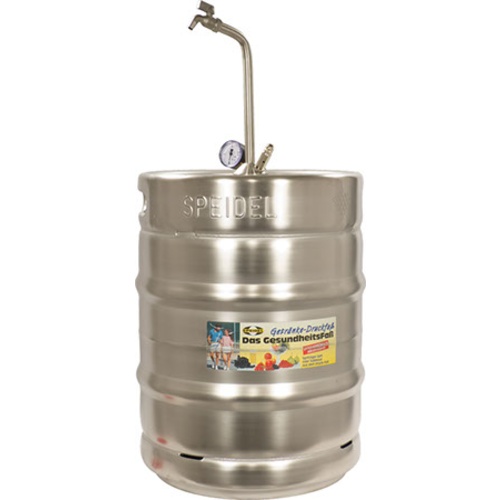 When the Campaign for Real Ale resuscitated the market for cask-conditioned ales in the United Kingdom, many brewers had to make significant adjustments to their brewing processes. As real ale becomes increasingly popular in the United States American brewers are well served to take note of the lessons learned by our fellow brewers across the sea.

British brewers have a great many advantages over their American counterparts when it comes to producing and selling cask-conditioned beer. Customers in Britain appreciate it, bartenders understand it, distributors know how to handle it, and brewers are devoted to perfecting it. And now, thanks to the work of an organization called the Campaign for Real Ale (better known as CAMRA), Britain’s dying style of brewing has been resurrected.

CAMRA coined the term real ale to describe ale brewed from traditional ingredients, matured by secondary fermentation in the container from which it is dispensed, and served without the use of extraneous carbon dioxide. When CAMRA came into existence in the changing beverage market of the 1970s, modern modes of thinking pervaded the brewing process. Financial issues such as product consistency, product stability, loss prevention, and the expansion of retail outlets threatened to reduce the venerable art of brewing to mass-produced keg beers served “American style.” The traditional pub with its landlord and landlady living above the bar, personally taking care of the beer, and deriving a reputation based on their beer-tending prowess, was on the wane, and modern, profit-based businesses were taking its place. Instead of underground cellars to keep live beer year-round at the perfect 55 °F (13 °C) temperature, these new pubs kept their beer warm in a corner of the kitchen and ran it through an under-bar flash-chilling unit on the way to the tap. Instead of beautiful, long-handled beer engines with sensuously shaped porcelain handles and shiny brass taps, their beers were identified only by a lighted cowl on the bar that designated which bland, pasteurized, fizzy, weak beer was being poured. They inspired no buzz in the community that their “London Pride” was particularly good this week. Instead, their business increased when word went round that the payoff on the slot machine was set higher this week or that they had some good songs on the jukebox.

Then CAMRA stepped in, and over the course of the next 10 years its efforts to preserve tradition and choice in Britain’s brewing circles turned the British brewing scene around. Old styles were resurrected, and new beers were born. By the mid-1980s, every brewery in the country was once again producing cask-conditioned ale in some form or another to keep up with consumer demand. Cask ale sales increased to 10% of all beer sales. The new, modern pubs with their space in the kitchen, their refrigerated dispense lines, their plywood bar tops, and their trendy jukeboxes needed to sell real ale too, just to survive.

To make the transition from cold, carbonated, filtered beer back to real ale under today’s economic conditions, brewers and publicans have compromised on the use of some traditional techniques.

Malts: Cask-conditioned beer does not “benefit” from filtration; instead, brewers add finings (isinglass) to cause yeast to settle out naturally in the belly of the cask. The source of most hazes (other than yeast) is the malt, particularly malt protein. Brewers of cask-conditioned ales must have barley varieties that are low in protein and well-modified to produce beers that will clarify easily with the aid only of kettle coagulants and auxiliary fining agents.

Dry-hopping: Brewers used to add whole hops to the beer at racking to impart a dry-hop character that changed over time. Once consistency became a major issue, most brewers abandoned dry-hopping, although a few brewers still do it. Additionally, adding whole hops to beer can be problematic when it comes time to clean the casks back at the brewery. Hop leaves can stick inside casks, potentially contaminating future batches and causing serious problems with the brewery’s drains and effluent stream. Some brewers instead add hops by way of a hop back; others add hop oils or extracts to the finished beer.

Fermentation: Fermentation was traditionally carried out in open fermentors, and yeast was collected by skimming it off the top of the brew at the appropriate time. The beer was then cooled to 50 °F (10 °C) and left to mature for 3–4 days before it was racked into casks. Although many British brewers are still using their traditional fermentation systems, many large breweries must now learn to ferment cask-conditioned beers in their cylindroconical vessels, which means that some brewers will have to choose either to wait for the yeast count to fall into the correct range or to rough-filter the beer and then add back measured amounts of healthy yeast.

Racking: The increased demand for consistent, stable beer, whether cask-conditioned or not, has brought about an increased concern for how beer is filled into casks. Care is taken to monitor yeast counts, priming rates, and residual extracts. Several UK brewers add a small quantity of priming sugar to the cask to ensure adequate carbonation. (The technique of kräusening, that is, adding some actively fermenting wort as a priming agent, is not practiced in the United Kingdom). Other brewers add a preservative at this point. All additions are carefully tested for optimal performance.

Casks versus kegs: Traditional wooden casks have, for the most part, been replaced by stainless casks or enamel-lined aluminum casks. To conserve floor space in the brewery and the pub, some breweries have adopted a cask siphon, consisting of a long tube and valve that allows the cask to be stood on end. The tube, or spear, is gradually lowered into the cask as the beer clears. The siphon also allows venting, and the procedure often allows the beer to be served sooner than otherwise possible because the beer will clarify from the top down.

Conditioning in the brewery: In the past, the publican had an important role in beer maturation. With its year-round cool temperature, the pub’s cellar was an ideal place to continue the beer’s flavor generation. But when so many modern pubs have begun storing beer under less than ideal conditions, brewers themselves have taken on the role of ensuring correct maturation before dispatch. This has required that brewers create new facilities for conditioning and extend the beers’ storage period. Storing beer is a financial burden on breweries, which may have to pay tax on the beer before the pub has paid them for it. Currently, some larger breweries store the racked beer in temperature-controlled conditions until the carbonation is correct and the flavor is fully developed. This can take from 3 to 10 days after racking, so the beer may be as much as two weeks old by the time it is shipped.

Fining: Without the benefit of filtration to clarify the beer, brewers have had to learn to optimize the rate of fining to ensure consistently clear beer in the trade. Beers that do not drop bright are unmarketable to a critical public, and storage conditions are often not conducive to beer clarification. (Temperature shifts can be disastrous; overcooling can create chill haze, and overheating beyond 68–70 °F [20–21 °C] will denature the finings.) Though finings of some sort have been in use for quite some time, a great deal of research has been done in an attempt to understand how isinglass and other finings actually work. Suppliers have also perfected new blends of finings to suit particular yeast strains and that are more effective under the range of conditions likely to be encountered in the trade.

Distribution: Cask-conditioned beer was once a distinctly local phenomenon. Brewers have an old saying that their products should never be distributed farther than a horse can walk to and from in a day. Either some brewers in England own some incredible horses these days or something has changed. As available local retail accounts become harder and harder to find, brewers are having to go farther afield to sell their beers. As some beers have become national brands, the need to ensure consistent flavor and clarity under a variety of conditions has become increasingly important.

Some of the solutions to this problem, such as extended conditioning periods at the brewery, have already been discussed. Concerns with distribution also relate to issues of fining. For instance, beer fined with isinglass will only reclarify disturbed sediment 4–5 times before it can no longer work; therefore, if the beer is moved too many times, it will not settle. Distribution by a second party will almost inevitably result in more product movement and problems with clarity. U.S. brewers deal with this problem less often because their cask ales are mostly brewed and served on the same premises.

Dispense: The biggest changes affecting cask-conditioned beers have come in the area of dispense mechanisms.

Taps. New hand pumps and gravity taps with sparkler attachments have changed the way beers are being poured. The “Northern pour” (a tight, creamy head with relatively flat beer underneath, produced by a sparkler or swan neck) is now fairly common throughout Britain, replacing the “Southern pour” (no head but fizzier beer). Some pubs even have hand pumps that incorporate both methods of pouring into the same mechanism.

Temperature. Temperature can now be better controlled by a number of innovations, including foot-shaped probes for the inside of the cask and jackets and coils for the outside.

Cask breathers. Most importantly, the development of the cask breather has extended the drinking life of many a cask by excluding harmful air from the finished product without adding extraneous carbon dioxide. Maintaining proper condition (carbon dioxide content) in the cask has always been a problem requiring careful cellarmanship. When beer is removed from a cask, carbon dioxide tends to come out of solution to fill the void, flattening the beer. The traditional porous spile allows oxygen to contact the remaining beer, resulting in oxidation over time. Cask breathers, introduced about 20 years ago, allow carbon dioxide to flow into the cask at the same rate that beer is removed, creating a carbon dioxide blanket over the beer and preventing oxygen contact with the beer underneath. Another alternative is keeping the cask under low carbon dioxide pressure (0.25–0.5 psi). CAMRA accepts breathers, but if the beer is to be consumed quickly (say, within 2–3 days), breathers are probably not necessary.

Real Ale in the New World

Fortunately, the research and developments that helped English brewers improve the consistency and overall performance of their cask beers will help American brewers in their attempts to authentically reproduce beers in this traditional manner. American brewers needn’t get hung up on tradition, of course (it is unusual to find just the right conditions to produce, market, and serve cask-conditioned beer even in England), but the fight to preserve cask-conditioned ales has breathed new life into Britain’s brewing scene and certainly has a place in the United States’ growing craft brewing market. So, if a horse named English Drayhorse shows up in the Kentucky Derby, bet your mortgage on it.