Brewing With Herbs and Spices 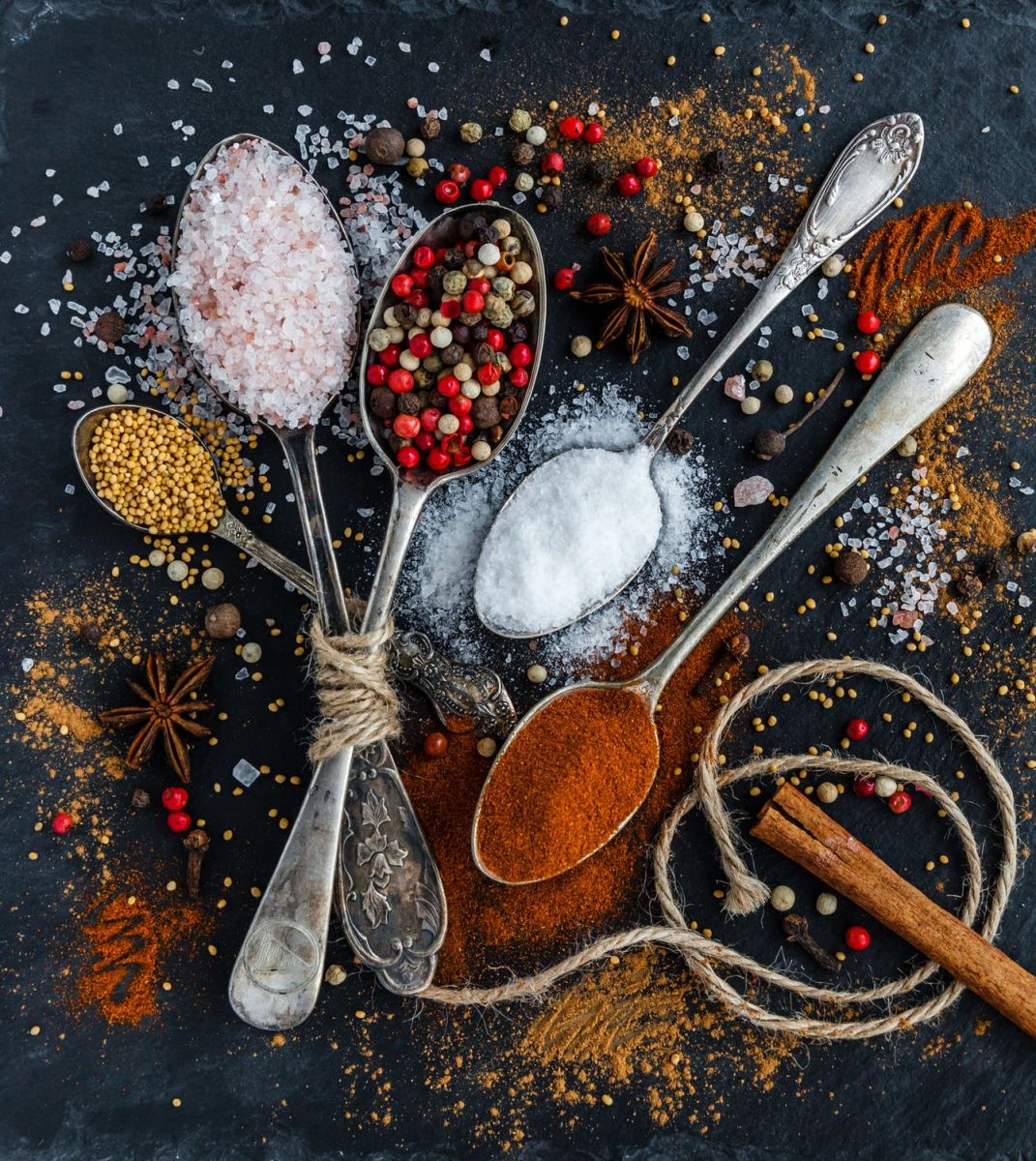 Spice up Your Brewing with Ancient Ingredients

Adherents to the Reinheitsgebot rules about barley, hops, yeast, and water as the only permissible ingredients in beer could take some lessons from more ancient history to liven up their tried-and-true recipes.

The use of spices and herbs in beers predates the use of hops by many centuries. The first primitive beers of Sumeria and Egypt were very likely made with some type of early spice or flavoring material such as dates and herbs. In 1985, Neolithic pottery was discovered on the island of Rhum and it contained a fermented beverage made with heather, meadowsweet, and royal fern.

The fact that herbs and spices have a long history in beer making should not be surprising. Beer made without hops (the original ale) tended to be a very sweet and cloying beverage. Even the early beers of the Middle Ages in Britain used a complex blend of herbs and spices called gruit to help balance some of the sweet malt notes with the often sour or wild yeast flavors and aromas (see box below).

Browse our selection of brewing spices to enhance your next home brew!

Modern-Day Use of Specialty Ingredients

While today’s beers are almost exclusively brewed with hops, there are some modern versions of spiced beer crafted with heather, and other beers whose primary flavors are derived from herbs and spices. Today’s home brewers, with their propensity for experimentation, will find it a natural progression to look to the herb garden to recreate a bit of history.

The use of herbs and spices in beer today is usually associated with the spiced ales of Belgium, the heather beer of Scotland, and the spicy, sometimes strong, holiday ales of the United States. Belgian ales have long been known to require some spices in their brewing, including coriander, cumin, Curaçao bitter orange peels, sweet orange peels, anise, ginger, cardamom, cinnamon, ginseng, vanilla, woodruff, and nutmeg.

Homebrew-store owner Bruce Williams’ Fraoch Ale is a modern reincarnation of an ancient beer made with over 1 lb of fresh heather per barrel of wort. Brewed at the MacLays Brewery in Alloa, Scotland, Fraoch Ale is made in 90-bbl batches using 27 sacks of heather (each sack holds about 5 lb of fresh heather) and a small handful of ginger root. About 60% of the heather is added at the beginning of the boil for flavor, and the remaining 40% is added in the hopback for aroma when the wort is cast out.

Brewers have two types of heather from which to choose: bell heather, which produces bell-shaped white to purple flowers from April to June, and ling or broom heather, which produces small white, red, or purple flowers from August to October. Only the top five centimeters of the plant are used, and flowers are stored at 38 °F (3 °C) or lower after picking to preserve their delicate aroma. A white powdery moss called fog that grows inside the heather is believed to have narcotic properties and is removed by rinsing the plants in cold water before adding them to the brew.

In the United States, spiced beers are primarily found during the holiday season; Anchor Brewing’s Our Special Ale is one notable trend-setter. This beer usually has generous spicing from the use of such ingredients as ginger, nutmeg, and clove, although the particulars of the recipe are said to change from year to year. Chili beer, made with whole chili peppers, is another popular type of spiced beer. It’s not for everyone, but if you have a taste for chilis, it can make an excellent beer with some real hot finishing touches.

The recipe: As for all types of beer, spiced beers require careful design with thorough consideration of the desired balance of flavors, aromas, alcohol, bitterness, and finish. Once a base malt bill and alcohol target are established, the next step is to decide whether to use multiple spices that blend and marry the individual spices into a more complex sum of the parts, or to focus on just one spice. Many brewers choose to make a beer with an extremely one-dimensional spiced character, but even then some forethought to the malt foundation and the strength and type of spicing is important.

I feel that the most successful spiced or herbed beers are the ones that retain a notable malt foundation and a moderate amount of bittering hops, where the spices or herbs complement but do not overwhelm the basic beer flavors.

Brewers often choose to boil one or more spices for a longer time to focus on the flavor contributions of the spices rather than just the aroma content. Just as with hops, the longer the boil, the less the volatile aromatics persist into the beer. The more delicate herbs, on the other hand, should not be boiled. Most would not survive the boil and still be detectable. Like dry-hopping, adding dry herbs or an herb tea is a better way to get the aromatics you desire. Some brewers, however, boil for just a short time, 5 or 10 minutes, to achieve a more subtle contribution.

Freshness matters: Choosing the right types of spices for brewing is every bit as important as for cooking. Whenever possible, use the whole natural form of the herb or spice rather than the processed packaged form. While it’s possible to create a decent curry from preground, old cumin, coriander, and curry powder, the world-class chef will carefully grind the ingredients from the whole seeds just before adding them to the dish. Similarly, seek out the freshest form of the herbs and spices for brewing. You can often find excellent examples in local health food stores, college food cooperatives, and specialty spice shops.

A good brewer doesn’t intentionally brew with old stale hops, yet home brewers will often reach into the kitchen cabinet and pull down a jar of spice that is many years old. With spices as with most beer ingredients, freshness matters.

To hop or not to hop: When brewing a spiced beer, you have the option of omitting the hops entirely or simply supplementing them with the bittering effects of spices. Spiced-beer brewers usually use some hops in the beer to lay a foundation upon which the spices and aroma hops build complexity and aromatics.

Witbiers are a good example of a spiced beer built upon a hop foundation. A witbier, or bière blanche as it’s called in Wallonia, will typically be kettle-hopped to the level of 10–20 IBUs. Some crushed Curaçao orange peels are added to this foundation for a 20–30 minute boil to contribute citrus flavors and some aroma, and crushed whole coriander seeds are added at or near the end of the boil. Both orange peel and coriander are typically added at the rate of 1/3 - 2/3 g/L of wort. Some adventurous brewers add as much as 1 g/L or more of each spice. Each brewer’s preference determines the optimum amounts and boil times for each spice.

Detailed note-taking and repeat experimentation are crucial. When in doubt, it is often safer to err on the conservative side and adjust upward in subsequent brews, for fear of producing a completely undrinkable beer. If a taste from the fermentor leaves you wanting more spice character, you can cook up some spices in a tea and add them directly to the fermentor or bottling bucket. You can also dry spice just like dry hopping, adding the spices to the end of the primary fermentation, in the secondary fermentor, or even right into the keg.

Flavor characteristics: Just as in cooking, different spices impart very different characteristics to beers. Spices not only contribute to a beer’s aroma and flavor, but they can also lend a dryness to the beer’s finish.

The great Belgian ales from Rochefort are perfect examples of the use of spice at a rate that is not overtly detectable and yet is essential to the beer’s character. Noble hops are used, but not at a sufficient rate to account for the crisp dryness of these beers. This dryness comes instead from pulverized coriander that is added during the kettle boil (6), not to the degree of a witbier where its presence can be tasted, but more as a subtle background finishing element. Rochefort makes very big beers indeed, with alcohol levels ranging from 7.5% (v/v) for Rochefort 6 to 11.3% (v/v) for Rochefort 10. The unique marriage of high alcohol content with noble hops, dark candi sucre, and a touch of spice is a wonderful expression of the use of nonstandard ingredients in Belgian brewing.

Spice up Your Brewing

When you’re bored with the same old recipes and want something very different, complex, or maybe a special festive treat, spices can offer a window into a whole new realm of brewing. Styles such as Belgian strong ales are particularly well suited to judicious use of spices that complement the natural spiciness of Belgian yeasts. The combinations are almost endless, and while some experiments can result in disaster, others can create that special beer that wins ribbons in competitions and fame with your friends.