How to Become Fluent in Malt Analysis Sheet Interpretation

No two batches of malt are alike. The only sure way to predict their effect on your brew is to ask for and know how to read malt analysis sheets.
You are a serious grain brewer. Whether you brew professionally, as a hobby, or as an obsession, you take pride in your beer. You do everything you can do to reproduce each of your recipes accurately from brew to brew. Or do you?
Like most serious brewers, you probably adjust your hopping rates to reflect the alpha-acid content of each new lot of hops you purchase, but do you adjust your grains for changes in color, moisture, and extract potential? Do you know that a mere 2% increase in the moisture content of a new lot of malt accompanied by a matching drop in the extract potential can drag the density of a 12 °Plato (S.G. 1.048) wort down to 11.5 °P (S.G. 1.046) or increase the cost of malt 31/2%? Do you know that the color of dark-roasted malts commonly varies by 25-50 °L from lot to lot, or that one maltster's "dark crystal malt" may be 40-45 °L while another's is 80-90 °L and someone else's is 120-130 °L?
Even slight changes in malt specifications may have perceptible consequences, combinations of lot-to-lot variances in the color, moisture, and extract content of malts can seriously alter a recipe's results. Whether you brew at home or at work, the more you know about the malt you use, the better and more consistent your beer will be. You can enjoy that gain without suffering any pain -- understanding and using malt analysis sheets is neither difficult nor unpleasant.

Any maltster should be willing to provide a lot analysis sheet. The malt analysis reveals the suitability of a malt to the mashing capabilities of the brewery and the brand's flavor profile, and it defines any adjustments that may be necessary in brewhouse procedures. At minimum, every lot analysis should provide the color, moisture, extract, total and soluble protein, mealiness (friability or vitreosity), and size assortment of the malt. For base malts, the brewer will also want to know the diastatic power.
Maltsters often provide typical analyses with ranges instead of lot-specific analyses. Nevertheless, lot-specific analyses should be available upon request. Similarly, a complete lot analysis is not typically performed on specialty malts, but may be available upon special request.
Base malts: "Base" barley malts provide the bulk of the wort's soluble extract and the enzymes that produce it. The base malts, in order of ascending color, are Pilsener, lager, pale, mild, Vienna, and Munich. The last two, however, are most commonly used at only 10-25% of the grain bill for mild flavor contribution.
Specialty malts: Color or specialty malts include caramel, crystal, toasted, and roasted malts. These malts may contribute significant color, flavor, mouthfeel, and aroma to the beer in varying degrees, but will not contribute enzymes to the extract.
Although wheat malt contains enzymes and in some beer styles is used as part of the base grist, it is usually considered a specialty malt. It may be used to broaden flavor, increase a beer's head and body, and decrease its color. 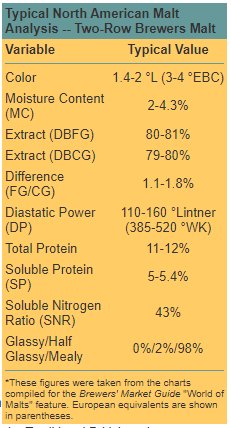 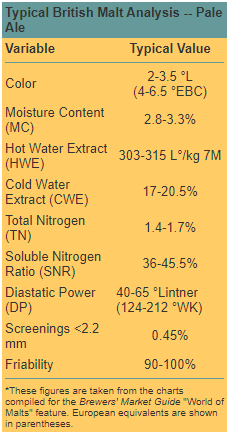 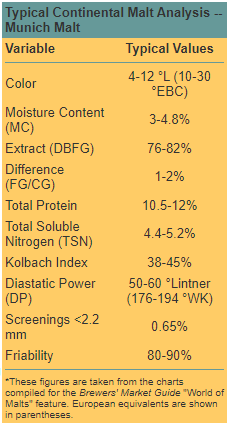 Differences in origin: Large American breweries prefer high-protein malts, especially six-row barley malts, to offset the large percentage of adjuncts they typically use in their grists. The increased protein makes up for the adjunct's deficiencies in diastatic power and protein content.
European barley malts are typically derived from two-row barley and range from 8 to 10% protein. Traditional British malts are more completely and evenly converted and thus are more readily mashed than traditional German malts. Malts made from American barley have significantly higher protein content than either of their European counterparts (North American two-row typically has 10-12% protein, six-row 11-13% protein), but their starches are generally as completely converted as traditional British malts. Protein levels in both two- and six-row North American barley have been about 1% lower than normal for the past couple of years.
Standardization of measurements: Lot analysis figures are standardized based on the American Society of Brewing Chemists (ASBC) or the European Brewing Convention (EBC) standard mashes for easier comparison. Although these standard mashes are made under very efficient laboratory conditions that give higher yields than any brewer commonly achieves, the figures do provide a useful tool in predicting malt character and performance, even across lots, and for making comparisons between malts. For example, lot analyses are given on a "dry basis"; that is, the parameters listed in an analysis are adjusted to give values as if the malt were oven-dried to 0% moisture content. This convention facilitates comparisons between lots and eliminates the need to adjust for varying moisture percentages.

The preceding parameters are of essential importance to any brewer. Several other terms are commonly given in lot analyses as well.
Alpha-amylase or dextrinizing units (DU): While DP gives a ratio for all amylases present in the malt, DU breaks out alpha-amylase. A range of 35-50 DU (dextrinizing units) is acceptable, depending on the malt type and the mash program. Munich malt may be below 10, and pale malts may be as low as 25.
Wort pH: Base malts should give a pH range of 5.5-5.8, with ale malts at the lower end and lager malts at the higher end. The brewer uses these pH values to adjust liquor acidity for the particular lot of malt so that the ultimate mash and wort pHs end up within the optimum range of 5.2-5.3.
Viscosity (cP): Viscosity is a measure of the breakdown of �-glucans (endosperm cell walls) during malting, expressed in cP (centipoise units) and sometimes IOB. A malt that shows a high laboratory wort viscosity (over 1.75 cP) will not run off well during sparging. The higher the viscosity, the greater the need for a decoction program -- or less effectively, a step mash -- to break down �-glucans.
Viscosity measurements given in IOB units should be in the range of 6.3-6.8 (taken at 158 °F [70 °C]).
Odor of mash: "Normal" is the typical reading. The term "aromatic" indicates greater-than-usual malt aroma. Terms are based on ASBC standards.
Speed of filtration: Gives an idea of the levels of �-glucans and degree of starch and protein conversion, also based on ASBC standards.
Degree of clarity: "Normal" to "slightly hazy" are acceptable values.
1,000-Kernel weight or bushel weight: The acceptable range for 1,000-kernel weight is 36-45g. If the weight is expressed as bushel weight, a value in the range of 42-44 lbs is usual.
DMS precursor (DMS-P): This value represents the levels of S-methyl methionine (SMM) and dimethyl sulfoxide (DMSO) in the malt. These compounds will convert to dimethyl sulfide (DMS) when the wort is heated. The DMS-P should be 5-15 ppm for lager malts, less for ales. The more fully modified the malt, the lower the DMS-P levels should be.
Growth: Another way to assess degree of modification. Acrospire growth is often expressed in ranges 0-1/4, 1/4-1/2, 1/2-3/4, 3/4-full, or overgrown. Look for at least 3/4 to full growth for American and British (typically fully modified) malts, and 1/2-3/4 for multirest lager malts.

The World of Malt Is at Your Doorstep

Learning how to read a malt analysis sheet is not difficult. Using it to adjust a recipe's grain bill and brewhouse procedures improves batch-to-batch consistency and beer quality. Shouldn't you be using the lot analysis that your malt provider has gone to the trouble of providing?