A Simple, Practical Method for Long-Term Storage of Yeast 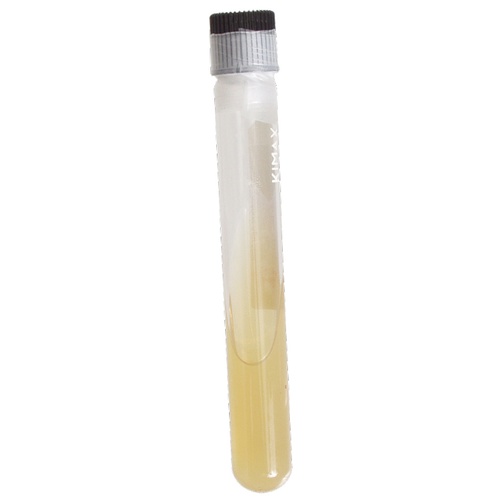 The long-term storage of yeast outside of a well-equipped laboratory is usually thought to be too difficult to manage on your own, but with a bit of preparation and a few basic supplies, it can be a worthwhile pursuit.

The biotech company where I work houses one of the largest collections of microorganisms in the world. Given that environment, it was only natural that I would begin collecting brewing yeast after I took up brewing four years ago. Over time, I realized I needed a practical, secure, and convenient method for storing the yeasts I was collecting. What I have learned through careful experimentation may be useful to other home brewers and to pub and microbrewers familiar with yeast culturing techniques but hampered by limited laboratory resources. At first, I kept my cultures on slants. Every couple of months I transferred them to fresh agar, but the task became more and more arduous as their numbers grew. When my collection eventually exceeded 50 strains, I began exploring different methods for storing my cultures.

First, I took samples from each culture to work and stored them in liquid nitrogen so I would have a set of original samples against which to compare the results of subsequent experiments. Liquid nitrogen stores cultures at –384.8 °F (–196 °C); it essentially stops all metabolic activity. Organisms can be maintained indefinitely at this temperature.

Once my control sample was safely stored away, I set about exploring and evaluating promising storage alternatives. I found four methods that could be performed at home, and I tested each with several yeast cultures until I discovered the one that worked the best. This article presents my findings.

Click here to browse our selection of yeast kits for culturing, storing, and growing yeast!

Slants: The first method was simply maintaining the cultures on slants as I had been doing from the beginning. I do not believe, however, that maintaining cultures on slants is practical for more than a few cultures because the yeast must be kept refrigerated and diligently transferred every couple of months or they will die.

Mineral oil: For method two, I overlaid my slants with sterile mineral oil. This oil overlay keeps the sample from drying up and serves as an oxygen barrier. Yeast can live without oxygen, but the oil slows cell division, thereby increasing the yeast’s longevity. This method will increase the maximum time between transfers to about six months; however, the cultures must be kept refrigerated, and the oil is messy.

Silica gel: My third preservation technique was silica gel desiccation. Silica gel is an extremely hygroscopic (moisture absorbant) substance used as a drying and dehumidifying agent. Dram vials of silica are sterilized and dried by heating them to about 350 °F (177 °C) for 90 minutes, then chilled. A centrifuge is used to suspend yeast in a milk/distilled water mixture, which is then introduced to the chilled vial of silica and stored in a non–frost-free freezer (the refrigerator’s temperature cycling process will kill the yeast). A single crystal of frozen gel can be tapped out to inoculate a 3–5 mL culture. Yeast stored this way may survive for a year or more.

The advantage this method has over other methods is that it can be used to store brewing bacteria (for example, Lactobacillus and Pediococcus for Iambic production) for long periods of time. Sterile water is quite toxic for most bacteria, and Lactobaccillus usually dies within a week or so when left on slants. The disadvantage is that, clearly, this method can be quite challenging to perform.

Distilled water: The approach I found to be the best for the home-spun laboratory was the distilled water method. It is space efficient, easy to perform, allows the cultures to be stored at room temperature, and maintains their viability for years.

Sterile water was first used to preserve mycological cultures by Castellani in 1939. Since then, many scientists have used this method; McGinnis et al. and Odds reported that they were able to maintain viable cultures for more than three years.

The technique for storing yeast in distilled water is quite simple. It should be a snap for brewers already familiar with yeast culturing practices, especially those accustomed to minding details and keeping a wary eye open for potential contaminants. The materials requirements are modest (see box above “What You Will Need”), and the rewards — especially if you chance upon a rare or exceptional yeast strain — can be immensely satisfying.

Sterile technique: It is absolutely necessary that you follow sterile technique when attempting to store cultures. Wash your hands, clean and disinfect all working surfaces, sterilize everything that your cultures will contact, flame the lip of all containers, and minimize dust and drafts as much as possible. A laminar flow hood with a HEPA filter will greatly facilitate sterile culturing. If you don’t have access to one, you can build a homemade version for about $100.

Procedures for distilled-water yeast storage: First, you will need an agar slant or a plate of the yeast you wish to preserve. This culture should be fresh and free of contaminants. If the culture is more than a month old, it is a good idea to inoculate another slant to check it for viability. A culture at 86 °F (30 °C) should grow enough to produce visible colonies within one or two days when streaked on plates (the wort plates mentioned in the box, “How to Make Your Own Slants and Media” will work for this). Growing cultures at room temperature may extend the process to two to four days. Fresh cultures are important because they demonstrate greater longevity when preserved than do old, tired cultures.

With strong, healthy yeast in hand, it is time to prepare the vials. Fill dram vials about one-third full (about 2 mL) with distilled water and screw the lid on loosely so that steam can enter and exit the vials freely. Place the vials upright in a rack and sterilize them in the pressure cooker at 15 psi for 20 minutes.

Once you have prepared the sterile water vials and a sterile work area, use your sterile inoculating loop to scrape off a loop full of yeast and transfer it to the vial of sterile distilled water. Screw the lid on tight and wrap parafilm or electrical tape around the top of the vial to make sure it is airtight, and shake the vial to break up yeast clumps. The yeast will form a whitish, powdery sediment at the bottom of the vial if left undisturbed for an hour or two.

Store the vials containing the preserved cultures away from direct sunlight and in an area with minimal temperature fluctuations. I keep mine on my bookshelf. You can refrigerate them, but it is not necessary. Keep in mind that most kitchen refrigerators are full of contaminating organisms.

Reanimating the yeast for brewing: Begin the culturing process about a week before you plan to brew. The yeast that you have stored is in a dormant state, and the dram vials contain far too few of these yeast to effectively ferment a beer. The first step, then, is to reanimate the yeast and then work up a pitching quantity. The optimal method for doing this is to resuspend the yeast by agitating the vial, dip a sterile loop into the vial, and streak it out on an agar plate or slant. You can buy commercially prepared slants and plates or make them yourself (see box, “How to Make Your Own Slants and Media”). Once colonies grow up (a couple of days later), you can inoculate 5 mL of wort or other liquid media with a loop full of yeast from the slant.

Starting the reculturing process on agar slants has several benefits:

·         First, it enables you to visually check the growing colonies for some types of contaminants. Models will be noticeable (black + furry = bad), but keep in mind that many contaminants can not be detected visually.

·         Second, yeast culturing reduces lag time; yeast that are actively growing on agar won’t waste any time once they contact the wort.

·         Third, if you seal the slant tightly and keep the yeast at 39 °F (4 °C), the yeast will remain viable for several months (at least two), allowing you to use it again in subsequent brewing sessions or to give it to a friend. If you must store your slants in a kitchen refrigerator, seal them in zip-lock bags and disinfect the outside of the bags when you remove them for culturing.

Aeration is very important for yeast reproduction, so I recommend agitating your growing cultures every few hours to speed the reproduction process. Once the 5-mL culture has reached high kräusen (at about 24 hours), use it to inoculate 50 mL of wort. After another 24 hours, your 50-mL culture should be in high kräusen and ready to use to inoculate a 500-mL culture. A pitching volume (1 L for 5 gal, 3 L for 15 gal) can then be inoculated with the 500-mL culture. Conventional wisdom suggests that the best time to pitch is shortly after the kräusen has subsided. This pitching volume should be ready in about 12 hours.

If your wort is not ready to be pitched when the culture is, the pitching volume will remain usable for a day or two after the kräusen has subsided. You may keep the pitching volume in the refrigerator for up to one week (disinfect the outside before you use it to pitch), but at the expense of increased lag time, which may end up adversely affecting your beer.

It may seem intuitively plausible that you could decrease your effort by inoculating 1 L of wort directly from your distilled water stock. Although intuitive, this will not work. Despite your best efforts at maintaining sterile conditions, contaminating organisms will creep into your cultures. Although the use of hopped wort will decrease bacterial contaminations, it will do nothing to guard against wild yeast and fungi. Your best defense against contaminants is to overwhelm them with sheer numbers of your good yeast. To do this, increase the volume by no more than a factor of 10 until your volume has reached pitching quantities.

Armed with a firm grasp of sterile technique and a bit of practice, you can securely maintain many cultures using a variety of methods. Of the four samples I began last year, the plain and mineral-oiled slants are dead, and the silica gel and distilled water cultures are viable. Of these last two methods, the sterile water storage method seems to be the most practical, most preservative technique of all those available to small-scale brewers. No other method allows you to store cultures in a stable state for such long periods of time. In my experience, it has caused no loss in viability, it is inexpensive, and it is no more difficult than other storage methods. The cultures can be kept at room temperature and occupy very little space. Most important, the beers brewed with my sterile water cultures are indistinguishable from those brewed with cultures kept in liquid nitrogen.

Yeast culturing is not for everyone, but the satisfaction that comes from being involved at this level of the production of your beer is worth the extra time and effort.