Forced-Kettle Ventilation and Its Benefits 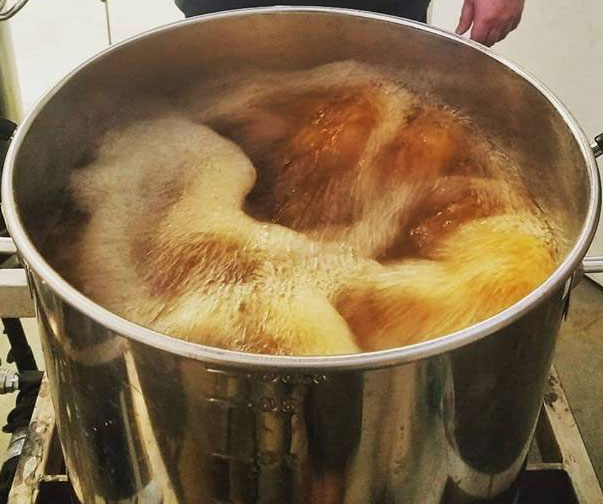 This description of the method — which is equally applicable in home and small-scale commercial breweries — includes an exploration of the physical and chemical processes at work in boiling wort.

Some time ago when I built my home brewery (in a shed in the backyard), I encountered a problem with steam from the kettle condensing in the building. I managed to fix the problem by installing a kitchen stove hood above the kettle. It worked great — it added more light and sucked away the steam. But I can’t leave anything alone, so I decided to improve upon it. I used a flat, aluminum pizza pan to cover the kettle opening, cored a 4-in. hole in it, and connected this by means of a metal flex drier duct to the hood. This design worked even better; it stopped boilovers and led to faster wort volume reduction.

I work at a brewery, and about six months after opening for business we outgrew the old kettle and the new 11 bbl one was working at capacity. Boilovers had become a problem, so I installed a booster fan in the kettle’s vent pipe. The modification stopped the boilovers and also caused some unexpected positive side effects. Hop utilization appeared to increase, and wort volume reduction became very consistent. I wanted to know why this was happening and began my own informal investigation.

This article presents the results of my research and personal experience. The possible explanations for the effects that I observed as a result of this simple modification include the physics and chemistry at work in wort boils. These methods are equally applicable to both home brewers and small-scale pub and microbrewers.

To browse some of our top-selling pieces of all-grain brewing equipment, click here!

Depending on where you live, changes in seasons can have a huge effect on the efficiency of your kettle’s wort volume reduction. In the course of a normal year, the ambient temperature at my brewery (Murphy’s Creek Brewing Co., Murphy, California) can vary as much as 90 °F (32 °C), which in turn greatly alters the temperature differential between the kettle and the outside air. Such differentials can cause inconsistencies in wort characteristics, whether at home or in the microbrewery.

Installing a booster fan in the vent pipe of the (enclosed) brew kettle can even out some of the variables that may occur in your brewing. The power of the fan (as expressed in cubic feet per meter) and the length and diameter of the pipe, which control the volume of air that can pass through it, will all have an effect on your end results.

Physics of the boil: When enough energy (in the form of heat) is added to wort, the molecular structure of the liquid water breaks down and forms steam, water’s gaseous state. As molecules gain enough energy to change state, they overcome surface tension and escape from the liquid in the process called evaporation. The factors that cause this energy transfer are temperature and pressure.

Implications for brewers: Because we want to control or at least add some degree of consistency to the evaporation that takes place in our brew kettles, let’s look at the variables that we can manipulate: the heat applied to the kettle and the means used to apply it (including both the amount of heat and the duration of heat application); and the air pressure in the immediate area of the boil, which is directly related to the temperature of the boil.

The colder the air at the output of a kettle vent pipe, the more and faster the evaporation will flow through it.

Because efficiency is a function of relative temperature differences, and because the effects of temperature are directly related to pressure, you can improve efficiency during any season by controlling the atmospheric pressure in the kettle. Increasing the airflow in the vent pipe will reduce the air pressure in the area just above the wort surface, thereby reducing the boil temperature and increasing the apparent vigor of the boil. (Note, however, that it is important not to force-ventilate the whirlpool or a kettle whirlpool because it will prevent the break from settling and keep it in solution.)

It is important to collect vapor condensation from the boil to prevent it from running back into the kettle. The chart in Table 1 can be used as a guide to selecting a booster fan for your kettle to achieve a specific boil temperature.

The visual evidence of a more vigorous boil should be reassuring. The added vigor also has many invisible potential benefits that merit exploration.

The Benefits of Forced Ventilation

Since the advent of steam power in the brewing industry, a wide variety of kettle shapes have been designed, each with the purpose of achieving improved boil dynamics and improving wort consistency. Reduced-pressure boiling can produce the same goal without radical changes to your existing brew kettles.

This section considers some of the desirable characteristics of the boil and how forced ventilation affects them.

Coagulation of unstable protein: Because the stream of bubbles that pass through the wort at boiling help proteins to coagulate, boiling should be vigorous. The more vigorously the wort is boiled, the more complete the coagulation.

Albumin particles accumulate on the surface of the wort around the bubbles of steam and air, and because of these high local concentrations they aggregate more readily into larger masses. Wort proteins are denatured when they coagulate, and denatured proteins are held in suspension only by means of their electrical charges. If the concentration on the surface of the bubbles reaches a point at which the force of affinity between the particles exceeds the force of electrostatic repulsion, the albumin will aggregate and precipitate.

Color: Boiling wort under pressure invariably deepens a wort’s color — the result of the caramelization of sugars and the formation of melanoidins. The opposite can occur with lower boiling pressures and possibly shorter boil times.

DMS: The breakdown of s-methyl methionine (SMM) to dimethyl sulfide (DMS) starts in the boil. Theoretically, all of the SMM in the wort can be broken down to DMS and then, with good evaporation, removed in the vapor. In actual boils, only about 70–80% of the SMM is transformed in this manner. The removal of DMS from the boil is enhanced and made more consistent once the outflow of the vapor from the boil is improved.

Hop utilization: A very interesting side effect to the use of forced ventilation is increased hop utilization. If a kettle is modified in the manner described in this article, as much as a 10% increase in hop utilization may occur. (Increased hop utilization will mean some adjustments to your formulation. It is a good idea to know the actual IBU count for your products so that you can compensate for any changes that may result from your equipment modifications.)

As to the reason behind this increased hop utilization, some theories have been proffered. Unfortunately, they are just that — theories. They attempt to explain a brewing anomaly and as yet have no scientific proof. It is my hope that the ideas presented in this article will encourage enterprising brewery researchers with the resources and skills to either prove or disprove these theories.

In 1955 Kolbach studied the effects of high-temperature wort boils on hop utilization (see Table II). The higher temperature boils were achieved by increasing pressure in the boiling vessel. The variation of boil time within normally encountered limits was found to exert little influence on the utilization of hops. Any gain in bitterness would be offset by the obvious economic disadvantages of protracted boiling.

The extraction of hops with wort boiled at different temperatures did, however, result in marked changes in the production of bitter substances. For the series of temperatures at which the wort (1.040 gravity) boiled under pressures of 1, 2, 3, and 4 psi above atmospheric pressure, the hop utilization exhibited a maximum value at 3 psi (at 223 °F). The result of these brewing trials agrees with Kolbach’s observation that the optimal temperature for the isomerization of alpha-acids under laboratory conditions is 223 °F (106 °C).

Kolbach’s research, however, dealt only with increases in pressure/temperature during the boil. His results indicate that, up to a point, utilization increases as pressure and temperature increase. This has a certain logical appeal to it because generally in the brewhouse higher temperatures tend to imply a greater number of stable reactions. Yet, because Kolbach did not experiment with lower pressures or perform actual field trials, his work can be viewed here only as a curious reference rather than as a scientific conclusion based on experimental data.

The most plausible factor is the effect of vapor bubble dynamics on the boiling wort. Typically, as the wort is vaporized at the bottom of the kettle, the bubbles rise, burst at the surface, and the steam escapes into the air. However, because forced ventilation causes the wort near the surface to be cooler, the bubbles rising into this cooler region collapse before venting as a result of the lower saturation vapor pressure in the cooler region.

As the bubble collapses, the pressure and temperature inside the bubble can become very high. This is known as cavitational collapse. When the bubbles collapse instead of venting, the potential for chemical reactions in their vicinity is greatly increased.

The phenomenon of cavitational collapse in incompressible liquids was first described by Lord Raleigh in 1895. Cavitational collapse can produce intense local heating and high pressures for very short lifetimes. These hot spots have temperatures of roughly 9032 °F (5000 °C) and pressures of about 500 atmospheres. These conditions could certainly increase hop utilization in the wort boil.

In theory, it should be possible to optimize the boil, and hence obtain a high percentage of hop utilization, through the application of reduced-pressure boiling from a booster fan. Experience in our brewery suggests that this is in fact the case.

If a shorter and more consistent boil can be used — with the same IBU results and a reduction of hop tannins and pectins dissolved in the wort — it might be possible not only to gain potential savings in fuel, time, and raw materials, but to enhance product shelf life as well. More work needs to be done in this area, but for the time being the simple kettle modification could be worth it to your brewery.