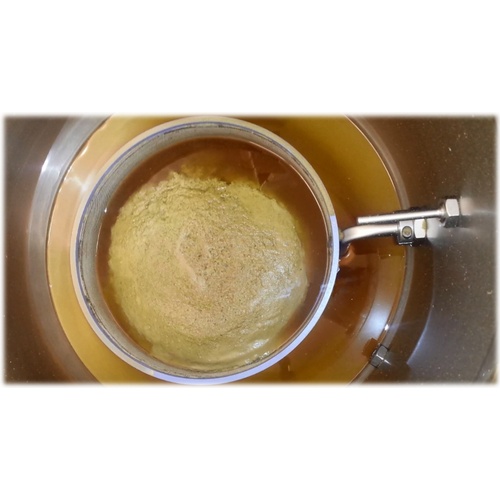 Hot trub, the protein precipitate formed during the boil, can impede fermentation and produce undesirable qualities in the finished beer. Simple, effective methods allow professional and home brewers to remove this unwanted by-product.
It is 9:15 a.m. in Ashburn, Virginia, and I am just starting to bring my wort to a boil. Suddenly, large chunks of protein rise to the top. They look bad, they smell bad, and they taste very bad. In this case, the senses do not deceive — these coagulated proteins and gums are bad. They are bad for the fermentation and for the finished beer. Trub coagulated in the first 5 min of boil can account for 60% of the total trub and is easily identified because of the large size of the pieces.
These initial coagulates can be skimmed, reducing the amount of trub you need to remove at the end of your boil. More trub will be produced during the boil, though the shearing action of the boil presents the coagulates from growing quite as large as at the beginning of the boil. With a 1–2 h boil, however, enough of the proteins (95+%) will coagulate to be removed as trub using one of several methods.

Technically, trub is defined as the insoluble precipitate that results from protein coagulation and simpler nitrogenous constituents that interact with carbohydrates and polyphenols. It is also referred to as “break.” Hot trub is that part of the break that occurs during the boil and is mostly proteinaceous; cold trub, which consists of proteins and protein–tannin complexes, is formed as the wort cools and the beer settles. Although most amino acids are assimilated by the yeast, remaining proteins should he removed because they later react with polyphenols, resulting in colloidal instability (haze). The elimination of all non—amino acid proteins is not warranted or even desirable, however, because they are essential for giving the beer full body and head retention.
Hot trub precipitates are formed during the boiling of the wort. In a study in a German brewery, hot trub particles varied in size from 30 to 80 µm. Effective removal of hot trub before fermentation is critical because the trub can smear the yeast’s cell walls, impeding the transport of substances in and out of the cell, which can lead to head retention problems, poor flavor stability, and harsh bitterness in the palate of the beer. The actual nutritive value of hot trub is greater than that of spent grains, because it contains more digestible crude protein per unit weight. The overall amount of trub (wet weight) varies from 200 to 400 g/hL (235 to 470 g/bbl), depending on various factors.

Crop location, seasonal factors, and genetics influence the amount and type of protein in the barley and hence the amount of hot trub. In addition, high-temperature kilning in the malthouse (for example, that used for darker malts) results in fewer high molecular weight proteins in the wort and therefore less trub. It has also been shown that quicker, less-intensive mashing routines yield worts containing more trub. Conversely, triple and double decoction mashing produce worts with considerably less trub, because the mash boiling process and the extended protein rests of such mashes maximize the breakdown of proteins and the removal of trub before the kettle boil. Higher gravity, all-malt worts, by virtue of having more malt, will have correspondingly greater trub.
Mash pH does not greatly affect the amount of trub unless it falls below 5.0; below pH 5.0, the amount of trub formed decreases sharply. Proteins coagulate most readily at their isoelectric point (the point at which the numbers of positive and negative charges are equal), which is pH ~4.9 in the case of wort proteins. In research conducted using a whirlpool, Van Gheluwe and Dadic showed that the best sedimentation occurred with wort of pH 5.0–5.2. Furthermore, the longer the wort boils, the more trub will be formed, albeit at an ever decreasing rate. In boils >2 h, coagulation will be somewhat offset by shearing action on the proteins. It is generally accepted that boiling times of 1–2 h are sufficient for most beer styles.
Many brewers, both professional and amateur, use kettle coagulants such as Irish moss (red marine algae Chondrus crispus and Gigartina stellata) and its derivatives to increase trub coagulation. The Irish moss, a negatively charged colloidal material, attracts positively charged proteins in the wort to form larger hot trub particles. In its raw form, 4–8 g/hL (4.7-9.4 g/bbl) Irish moss should be added to the boiling wort ~15 min before knockout. Because treatment with Irish moss can cause the wort to foam and boil over, watch the boil and be prepared to reduce the heat going to the kettle. Irish moss is more effective if first diluted in water and let to stand for at least a couple of hours (preferably overnight), thus promoting swelling and gelling action. Incidentally, for those Reinheitsgebot purists, the addition of kettle coagulants is not allowed.
Click here to browse our selection of best-selling brewing clarifiers!

Most home brewers will find that creating a whirlpool in their kettles is the most effective means of hot break removal. Whirlpools can be created in homebrew kettles by vigorously stirring the wort and allowing it to stand for about 20 min, until the trub settles. Wort is then siphoned from the side of the kettle, away from the trub cone. When whole hops are used, home brewers can tie a metal scrubby (standard pot scrubbing type) around the inlet of the siphon to ensure that no hops and less trub will pass through. When purchasing your scrubby, make sure that it is copper or stainless and contains no detergents. If the siphon gets plugged, it is usually an indication that the whirling action was insufficient. After replacing the scrubby, try stirring faster and allowing the wort to settle longer before siphoning.
A home brewer friend of mine has an interesting system for removing hot trub in his 1-bbl system. He boils his wort with a lauter screen (standard perforated sheet) in the kettle. At the end of the boil, he vigorously stirs his wort, making a whirlpool. After the wort settles, runoff is drawn beneath the screens from a side port. This system essentially uses both a whirlpool and a hop back and has been successfully used for both whole hops and pellets.

More-complex methods of removing hot trub exist. Centrifugation has the advantage of quickly removing trub and small-particle-size material. Centrifuges are expensive to buy and maintain and use considerable energy. Diatomaceous earth filtration has been used, but my sources give conflicting information about the effectiveness and suitability of this method. And then there’s the curious floating pick-up system, in which wort is drawn from the top of the kettle by a floating wort pick-up. The wort is taken from the top, and collection is halted when the floating pickup is far enough down in the vessel that it begins picking up trub. Removing hot trub is essential to produce a quality beer. A well-engineered whirlpool or hop back provides an inexpensive, effective separation method.