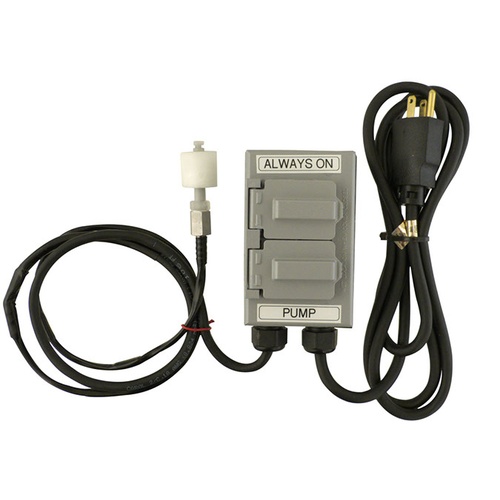 Please read these instructions in their entirety before using your new MoreFlavor! Float Switch.

Congratulations, and thanks for your purchase of your MoreFlavor!  Float Switch. Float Switches are a great tool for customizing and automating your home brewery or winery! You can use a float switch to turn your pump on and off automatically in order to regulate your sparge rate, keep a bottling tank or reservoir full, empty a grant and fill vessels without making a mess.

The food grade urethane float(s) slides up and down on a small post, connected to a sealed moldable wire(s) which is bent over the rim of a container so that the float hangs at the desired height. Depending on the float’s orientation it can either keep electricity flowing to the pump, or cut it off. A single level float switch is great for applications where the pump will be running a lot and only needs to be off periodically, whereas the Dual Level switch is better in situation where the pump is primarily not running. In general Single Level switches are better for controlling sparges and for racking, and Dual Level switches are better for bottling and grant applications.

Click here to get your very own electronic float switch from MoreFlavor!

Set up is simple for both switches. Simply place the float(s) at the fluid level that you want the pump turned on or off, plug the pump into the electrical box, and plug the electrical box into the wall. One side of the float has a ring imprinted on it which is also a different texture than the rest of the float. If you have trouble identifying which side has the “ring” on it, please note that the end of the float with the ring is also a little wider in diameter than the side without it. If the ring is facing towards the end of the post the float mounts on it will turn the pump off when it moves away from the end of the wire (when it floats!). Turn the float the other way and it will turn the pump off when it floats. There is a clip on the end of the post which can be removed so you can change the operation of the float.

Filling Containers: With the Single Level switch, if you’re filling a container like a carboy or barrel and want to turn the pump off once the container is full, then place the float at your desired fill height with the ring side of the float facing down, or towards the end of the post. When the liquid reaches this level the pump will be turned off. You can then unplug the pump and move your pump’s outlet hose to the next container, etc. before resuming your racking/transfer.

Sparging: Setting the float switch up for sparging is the same as setting it up to fill containers - place the float at the max level in your mashtun that you want the sparge water to reach. It’s still a good idea to throttle your pump down so that it is filling at the same rate you’re running off, but if you want to run off slower than the pump’s slowest flow rate, or you need to walk away, the switch will keep the mashtun from overflowing.

Emptying Containers: If you’re emptying a container you can drop the float, ring side up this time, down to the level in the container where you want the pump cut off, for instance just above the sediment level. This will cause the pump to shut off when the liquid gets down to this level.

The Dual Level Float switch works on the same principle as the Single Level switch, except that both floats have to be in a particular position in order to turn the pump on or off. This is perfect for the reservoir of a bottle filler, which needs to be refilled periodically, and for pumping out of a grant which needs to be emptied periodically.

Use with a Bottle Filler: Many styles of wine bottle fillers have a reservoir at the top which feeds wine to the bottle via either gravity or a siphon. The reservoir needs to be refilled periodically while you’re bottling. This is a perfect job for the Dual Level Float Switch: The switch will turn the pump on when the liquid reaches the level of the lower float, then turn the pump off when the liquid reaches the upper float, automatically refilling your reservoir.

Use with a Press Grant: A press grant is a vessel that collects the wine running off of a press, since the press cannot usually be situated to feed your tanks/barrels/carboys directly by gravity. The wine is pumped from the collection grant into the container it will actually live in. The Dual Level Float Switch can be set up to transfer wine out of the grant automatically as necessary.

To set up the switch, set the float on the shorter wire at the bottom of the grant where you want the pump to turn off, and the float on the longer wire at the top where you want the pump to turn on. You will need to flip the floats so that the “rings” face each other! The pump will now turn on when the liquid reaches the upper float and turn off when it reaches the lower float, thereby emptying the grant then leaving the pump off until the grant is filled again.


•  Test the float switch with a bucket of water when you receive it to familiarize yourself with its operation.

•  Dual Level Switch: For easy reference, wrap a little colored electrical tape around one of the two leads so you can tell at a glance which is which.

•  Dual Level Switch: If you hear a loud ticking sound then you have activated the floats in the wrong order (for example, in the bottling set up, you have lifted the upper float without resetting the bottom float). This noise is not an indication that your switch is broken!

•  Dual Level Switch: If the switch is not activating the pump, or it is working in the opposite fashion than you’re looking for, confirm that you have the correct float in the correct position and that the rings are facing each other.

•  Got a tip or new way to use the switch that we haven’t mentioned? Let us know at info@moreflavor.com!