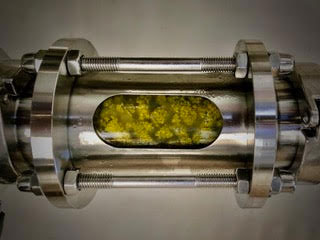 Creating Hop Aroma In Your Beer

To say brewers love hops might be an understatement.  Hops have been used in nearly every part of the brewing process because they give you (the brewer) the means to be creative. Want more bitterness in your beer? Add more hops to the boil.  Want more hop flavor? Save a portion of your hops for the whirlpool. Want more hop aroma? Read on.

When your beer creation calls for hop aroma, the one place you should be adding hops is in your fermentor. Known as dry hopping, adding hops to the fermenter helps otherwise volatile hop oils stay in your beer. This means the aromatic qualities they are responsible for - floral, herbal, spice, tropical and citrus, just to name a few - are released to the world when the beer is poured (and subsequently drank), not when the beer is brewed.  That’s important if you want drinkers to experience a fresh burst of hop aroma when they try your beer.

As a brewer, there are a few key things you can do in your beers to create a pleasing hop aroma. Thankfully they don't require a large investment or a lot of effort. Let’s take a look: 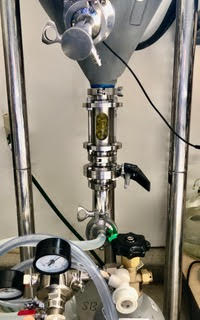 Tip 1: Choose hops based on the aromatic qualities you’re interested in achieving. This sounds obvious but it’s not always easy to know what aromas a hop might add to your beer.  Most hops are loosely categorized into “bittering” and “aroma” types, which tells us nothing about what they might smell like in a finished beer. A hop’s oil content and type can also be considered, but also may not have a direct correlation to how the hop expresses itself aromatically.  So what can you do? First, taste hoppy beers!  Note what you like and research which hops were used, then use those hops.  Second, visit some hop farms on the web.  They often have handy spider-graphs that describe the aromatic qualities of the hop varieties they sell.  And finally, experiment. Just because a hop variety is typically used for bittering doesn’t mean it can add something to the aroma party.

Tip 2: Save yourself the trouble and dry hop with pellets. Some brewers swear that whole cones produce better aroma intensity than pellets. But many experiments have shown that tasters can’t distinguish the difference between the two forms. Pellets are far more accessible to the average homebrewer, can be easily added to most homebrew fermenters, and they generally suck up less beer than whole cones, leaving you with more beer. That said, it’s also worth noting a third hop format has recently gained popularity.  Known as lupulin powder or cryo-hops, these products provide a concentrated dose of essential oils and resins in the form of a pellet. Their use in the brewing process is beyond the scope of this article, but generally hop varieties are limited and some tasters complain of a “bite” when large concentrations of these formats are used in the dry hopping process.

Tip 3: Add your dry hops during secondary fermentation, once the yeast is finished with fermentation and removed from the beer.  At this stage, the concentration of alcohol and the pH in the beer should limit the potential for infection during the dry hopping process. You will also be giving the hops the opportunity to release their oils without yeast around to transform them.  Experiments have shown that yeast in solution can bind to certain hop particles and transform them into different flavor and aroma compounds in a process known as biotransformation. Many brewers are experimenting with biotransformation by adding hops during primary fermentation. While there may be some merit in this process, the primary counterargument is it’s easy to lose a lot of aroma through the blow-off tube as the fermenter is relieved of CO2 pressure buildup during fermentation.

Tip 4: Dry hop on the warmer side. And by warm you should think at or above temperatures used for common ale fermentations (65-75F). One reason for this is at warm temperatures, any small amount of yeast still present is more likely to be active. The active yeast will scour any oxygen introduced during the dry hopping process and clean up any “hop creep”.  Hop creep describes a set of potential problems in dry hopped beer.  It goes something like this: hops are added during secondary, enzymes in those hops turn some previously unfermentable sugars into fermentable sugars, and then the yeast ferment those new fermentable sugars.  That extra bit of fermentation leads to two outcomes.  First, you get a little more attenuation from your yeast.  This means a slightly drier, higher alcohol beer.  Second, and more troublesome, you may end up with diacetyl in your beer.  During fermentation, all yeast release a diacetyl precursor.  With a healthy culture, the yeast takes care of that precursor in the later stages of fermentation.  But when dry hopping, we no longer have an active and healthy fermentation. This may leave the diacetyl precursor to hang around and convert to actual diacetyl at some point down the road.  By keeping the dry hop temperature on the warmer side, you ensure the yeast that are present are happy enough to consume the diacetyl precursor and leave you with a clean butterscotch-free beer.  That said, there are advocates of dry hopping under colder temperatures, but those brewers tend to align with the camp who dry hop with zero yeast present.  In commercial settings, it’s often a matter of practicality.  It’s difficult to cool a tank to the point of flocculation, and then warm the tank to dry hop.  As homebrewers we don’t necessarily face this problem.

Tip 5: Know that more hops doesn’t linearly equate to more hop aroma. The most well known scientific research on dry hop quantity was done by Oregon State University’s Dr. Tom Shellhamer in 20181.  He asked the question, does using larger quantities of dry hops lead to more hop aroma?  After several tests, he and his colleagues came to two conclusions.  First, dry hopping at rates greater than 1.1oz/gal (8g/L) was an inefficient use of raw materials.  In other words, hop aroma intensifies as more hops are used, but the impact on aroma diminishes as you approach this threshold, and doesn’t add much beyond it.  Shellhammer’s second conclusion may be more interesting to some brewers.  He found the quantity of hops can also change the aroma type in the finished beer. The oils responsible for citrus aromas were more present at hopping rates closer to 0.5oz/gal (4 g/L), than the oils responsible for herbal/tea aromas, which were more present at 1.1oz/gal (8g/L).

Tip 6: Leave your beer on the hops for three days.  Is this a strict rule?  Not really.  Studies have shown that most hop oils are extracted from dry hop additions in the first 24 hours.  But a greater percentage can be drawn out over the course of a few days.  That said, dry hopping for an excessively long period (more than seven days) may lead to certain undesirable aromas and flavors including vegetal and grassy notes.

Tip 7: Dry hop your beer once.  This is just practical for most homebrewers.  Sure, double-dry-hopped (“DDH”) sounds cooler than a single dry hop, but your homebrew is not competing against others on bottle shop shelves.  The thesis here is pretty simple.  First, see the research on hop quantities mentioned above.  Next, factor in that every time you open the fermenter, you introduce oxygen and potential contaminants. Oxygen is a problem for shelf-life and flavor.  Contaminants can be a problem for not just your beer, but for your equipment as well.  Why expose yourself to these risks if more hops doesn’t always equal more aroma?

Tip 8: Just dump in the hops. Blasphemy!  That’s not what the pros do. Correct. The pros spend a lot of money on specialized equipment that solve the problems of getting dry hops into five-story tall fermenters and turning tanks around as quickly as possible.  But in fact many still simply pour the hops in, straight from the bag.  If you are a more adventurous homebrewer, experiment.  Creating a hop slurry with de-oxidized water will result in a faster and more even dispersion of the hops in solution. Rumbling is an option for homebrewers with conical fermenters. This is the process of pushing CO2 into the fermenter’s cone in order to ‘rumble’ the solution, stirring everything up to get more contact between beer and hops. You can probably think of a hundred ways to put hops into a fermenter.  But why?  Just get them in there!

We are fortunate to live in an era where hops are abundant, both in variety and availability. Be creative! The above is just a guide to get you started with dry hopping.  Any one of the variables can be changed and is open to more research and experimentation.  What matters at the end of the day is your enjoyment in the process and the outcome of making beer. Cheers!
Notes: 1S. R. Lafontaine, T. H. Shellhammer, “Impact of static dry-hopping rate on the sensory and analytical profiles of beer” Journal of the Institute of Brewing 124, 434−442 (2018).