Reflections of a U.S. Beer Judge at the GBBF

A UK-trained beer judge from the United States recalls last year’s Great British Beer Festival as being both more formal and more sociable than beer competitions on this side of the Atlantic.

No one would dispute the fact that the Great British Beer Festival (GBBF) is the premier beer event in the United Kingdom. Organized by the Campaign for Real Ale (CAMRA), it is first and foremost a celebration of cask-conditioned ales, often referred to as “real” ales. It presents ales from brewers throughout the United Kingdom (and notably those who normally don’t distribute to London, where the event is located), showing off the variety and flavors not found in the increasingly popular kegged lagers. The overall goal of the festival is to promote real ale (and raise money for CAMRA), but beyond all this, in the words of one wag, the GBBF is “a great excuse for a piss-up.”

Piss-up though the GBBF may be for the customers and staff, the task of selecting the champion commercial beers of the United Kingdom is taken quite seriously. The judging takes place in two rounds; the results of the first round are tabulated, and then a final round is held. The judges include CAMRA members (including some non-brewers who have gone through tasting training), writers covering the brewing community, brewers, and other qualified people — such as a brewery’s CEO, for example, or a celebrity in the beer community. Most of the judges are British, but the other countries of the United Kingdom are also represented.

Four of us from the United States assisted in the first round of judging at the 1997 GBBF; joining me were Pete Slosberg of Pete’s Wicked Brewing, Garrett Oliver of Brooklyn Brewing, and book author and journalist Rob Haiber (whose by-line appears in magazines and brewspapers in the United States and England, including CAMRA’s own publication, What’s Brewing).

How did I get the gig? I simply asked CAMRA’s tasting director, Dr. Keith Thomas, if he needed a judge. Because I am a Brewlab graduate (Thomas is also the director of Brewlab) and have done evaluations with Thomas, he was willing to pitch me to Peter Bridle, the competition director. In the meantime, Haiber was also pitching me to Bridle. Having heard how fussy Bridle was about his selections, I was happy to have two such highly regarded sponsors.

I found striking differences between the way beers were judged at the GBBF compared to the homebrew competitions in the United States I have attended.

For example, the entire GBBF judging process was quite formal. One of the entrances to London’s Olympia Hall, the traditional venue for the GBBF, was reserved exclusively for the judges. Judges were greeted at the door by a staff member who escorted them up a flight of stairs, through the judging arena, and into a gathering area. Just about everyone came dressed up. I wore a shirt and tie, but most men wore suits. The women also dressed up.

The judging was held in a large room called the Apex Room. One could sense that the room had seen better days; it was now a bit run-down. Even so, it still retained much of its grandeur. Chandeliers hung between heavy exposed beams on the 20-ft-high ceiling, which was supported by white-painted wood columns. Walnut wainscoting scaled the walls for 15 feet, hung here and there with artwork. Tables were paired to form a large seating area for each team of judges. The tables were covered with white tablecloths and outfitted with bottled water and baskets of water crackers for freshening palates between samples.

The day of the 1997 GBBF was hot and sunny. Temperatures reached into the 80s (above 27 °C); in London that’s more uncomfortable than it sounds. The windows were open, and a fair amount of street noise filtered in, though I don’t recall it proving to be a distraction. The room was reasonably bright, but I was still glad to have brought my “torch” — a pen-light — which was frequently passed around at my table to check the clarity of the beers.

The beers before us had gone through CAMRA’s nomination process and preliminary regional judging. Beers were judged in six categories: ordinary bitters, best bitters, strong bitters, light and dark milds, specialty beers, and bottle-conditioned beers. Specialty beers are nontraditional forms of cask beer: cask lager, heather ale, spiced ale, and so on. Every table had six judges, and the ordinary bitters and best bitters were split into two flights of six or seven beers. CAMRA’s cider wing, the Apple and Pear Product Liaison Executive (more easily remembered as APPLE), held a competition for cider and perry (a drink made from perry pears) concurrently in the same room.

I sat on the panel for bottle-conditioned ales (this was familiar territory, because the vast majority of homebrews are bottle-conditioned). Bottle-conditioned beers compete for the title of Best Bottle-Conditioned Beer, and do not compete for Champion Beer of Britain. So, this was the final round for them. That made our judging panel similar to a best-of-show panel at a typical U.S. homebrew competition — except that with only a half dozen entries we had a less arduous task.

Keith Thomas announced the judges’ instructions to the entire room. As in the United States, judges were instructed to judge to style, where appropriate. The style guides that the judges used as a reference were essentially the same as those used by U.S. judges, but there were a few differences in procedure.

As opposed to the five criteria used in the United States, GBBF beers were scored on four criteria: appearance, aroma, flavor, and aftertaste (we call it “overall drinkability” instead of aftertaste, and add body to the list). Each could be given a score from 0 to 10 points, 10 being the most favorable. In addition, judges were instructed to pay particular attention to the aftertaste and whether they’d order another pint of the same beer when drinking at their “local.”

Our panel, judging bottle-conditioned beers, was unique in that the styles were not revealed to us; we were simply to evaluate whether or not we enjoyed the beers. If we thought we had an outstanding porter, great, but style was not to be a consideration in the scoring of these beers.

One aspect of the judging that rubbed me the wrong way was the rumor that scores were weighted differently behind the scenes. At our table it was leaked that one of the scoring criteria was counted twice to make a high score of 50 possible. Call me a Yankee, but not knowing for certain how my scores were being ranked bothered me.*

Judging started at 10:45 a.m. with a calibration beer, intended to warm up the judges’ palates and confirm that we were all using similar standards to judge the beers. Our first beer came before we’d finished the calibration beer, but we didn’t mind. It had at least given us the opportunity to get acquainted with the other judges at the table.

Our server (unlike in U.S. competitions, the GBBF “stewards” are security people) brought our beers decanted in half-pint glasses bearing the CAMRA logo. He did not get involved in the tasting. Unlike at U.S. homebrew competitions, judge training was not a goal here.

All judges received their beers in those same half-pint glasses, which were filled to about one-third to one-half capacity. Each glass was labeled with a rectangular Avery-type label applied over a piece of masking tape (apparently the label wouldn’t adhere directly to the glass). Later, when we requested a retaste of two of the beers, the rectangular label was replaced by a round one (I was tempted to ask for a third sample to see if the label would be triangular). Handwritten on the labels, in blue pen, was the entry ID. We judged P8, R8, S8, T8, U8, and V8.

The table discussion that followed was livelier than I’m used to. In the United States, many beer judges have adopted a “sterile” approach to judging: The beer isn’t discussed until the individual judging has been largely concluded. That wasn’t the case here. Comments like “Bloody fantastic, this one!” or “I’d drink a ton of this at my local,” or “Wouldn’t this be just delicious with your feet up by the fireplace?” were common, along with constant sounds of approval or disapproval. Beers were scored during and after discussion. The table captain would then request the next entry.

Our first beer, a golden ale, was the eventual winner. All of the judges liked it at the outset, but many were reluctant to give it highest marks in case better beers came along later. I stuck with my practice of not deducting points if I couldn’t justify those deductions and awarded scores of 9 for appearance (it had a slight haze), 10 for aroma, 9 for flavor (I found a slightly harsh note in the bitterness), and a 10 for aftertaste. Other beers earned top marks, but not as consistently as this one.

As we progressed, we got a bit cheeky, not unlike in the States. For example, one of the later beers had a balance that Jaclyn thought would go well with barbecue. I thought that an earlier beer had had a pronounced burnt caramel flavor and suggested that it was the barbecue. That drew a good laugh from the whole table.

Overall, I found the judging was as sociable as it was analytical. In many ways that aspect was refreshing. Then again, to one coming from a technical background, those social aspects can also be quite distracting. Had we been required to write remarks to justify our scores, I wouldn’t have enjoyed the chatter quite as much.

Unlike U.S. panels, we weren’t asked to reach any consensus as a panel for ranking the beers. Instead, when the judging was finished we simply handed our score sheets to our captain, who gave them to a committee for final weighting and tallying. We did informally discuss the beers we felt were strongest contenders for awards, but we didn’t know the final results until they were announced. Some of the judges indeed seemed to prefer to await the suspense and surprise of the awards ceremony.

*According to Thomas, the practice of affording extra weight to a given criterion had indeed been adopted in the past to break ties, but the common practice was to inform judges of any such weighting. He says the practice will not be continued in future competitions. 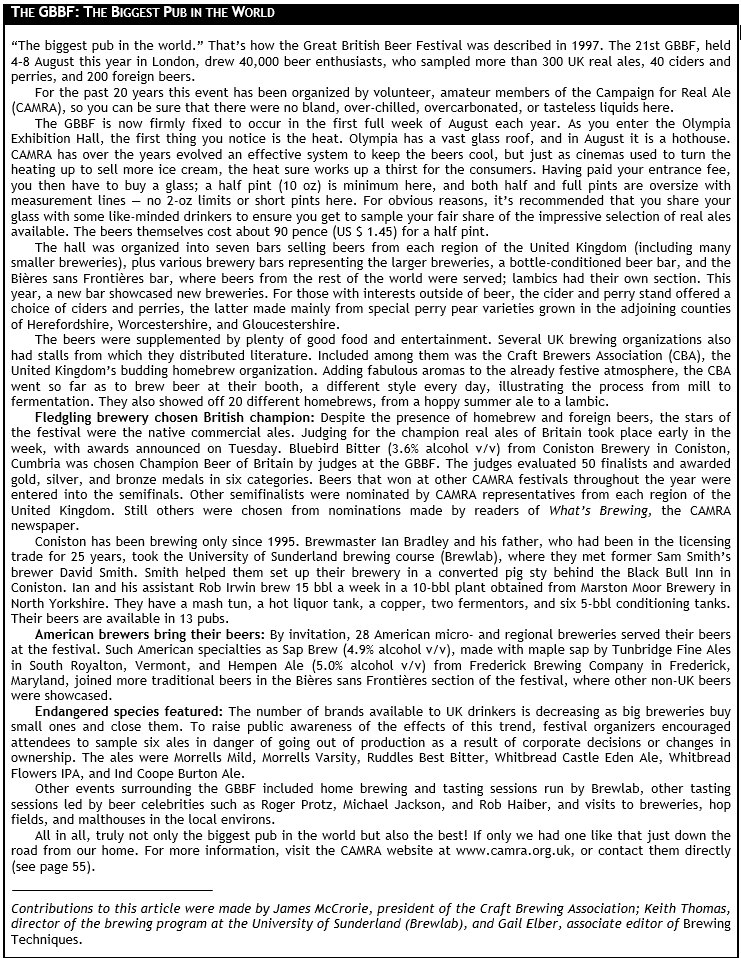 After our judging tables were finished, we went back to the gathering area for a light buffet. Meanwhile, the final round of judging for the champion beer of Britain convened and proceeded privately.

I think the six contenders for champion bottle-conditioned ale got a fair shake. Bram Lowe said quite sincerely that it was the best judging session with which he’d ever been involved. Coming from someone as experienced as Lowe, that comment made me proud to have been a part of this event.

Plenty of differences exist between judging practices in the United States and those in the United Kingdom: ranking by consensus as opposed to scores, relative formality and reactions when scoring, feedback given to the brewer, the number of judges on each panel, and the number of beers in a flight. Still, one goal remains the same: to recognize and reward the brewers of the fine beers. Any competent beer judge would do well on either side of the Atlantic.