Is the Beer You Drink in “Tap” Shape? 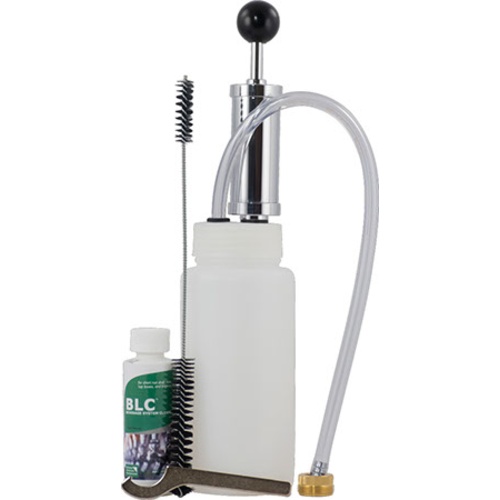 One of the great myths of our consumer society is that good packaging in itself guarantees a good product. Although the historical function of the package is to preserve and protect its contents, these days this seems incidental to its ability to sell. In fact, we are now so apt to judge the quality of a food or drink item by its visual appeal alone that we often forget the importance of storing and serving it properly.

Nowhere is this more true than for beer, probably the most perishable of all alcoholic beverages. As we know, sunlight, warm temperatures, and exposure to oxygen can cause the beer to rapidly deteriorate. On draft and hidden from view in a keg or serving tank, beer is even more susceptible to damage from dirty tap lines, overused or unrinsed sanitizers, or low carbonation levels. A lot can go wrong on the way from the brewhouse to your glass — and frequently does.

Sometimes what goes wrong comes from the glass itself. I’ve had pints of craft beers that reeked of bleach or iodine, fruit flavors or cider from previous pours, or refrigerator aromas from glasses sitting frozen in the cooler. I’ve also watched the head fall from badly rinsed glasses and noticed beer taking on a musty smell from a dusty vessel.

Sometimes what goes wrong comes from the publican’s art — or lack thereof. One of the great benefits of the craft beer revolution has been the plethora of multitap establishments popping up across the United States. Some have 100 or more beers on draft, a truly astonishing variety. But taking care of those taps is often another story. Many pubs clean their tap lines once a week, but that may not be enough with so many different beers to handle. How many publicans really taste their beers regularly before they serve them? Instead, the rule of thumb often seems to be, “If the customer doesn’t object, go ahead and serve it.”

I recently had an infected, noticeably phenolic beer at a local brewpub. When I called it to the attention of the bartender, he said. “Yeah, we know it’s a little off, but most customers seem to like it, so we keep it on tap.” After all, beer costs money to produce, and nobody makes more money off beer than a brewpub. Why dump it if you can sell it?

Click here to browse our options for keeping your beer lines clean!

It’s bad enough when, through ignorance or poor brewing technique, a brewer produces a tainted beer. And it’s possible that brewpub managers or staff might not recognize an infected brew, although it ought to be their business to do so. But what’s truly reprehensible is when those in charge know the beer is bad, but pour it for their customers anyway.

To continue this “sell-at-all-costs” rationale, if someone will buy it, why not sell them a car with faulty brakes or a leaking gas tank? Or tell them it just “rides hard” if the suspension is bad? But you’d never catch a car salesman driving one of those lemons home himself! When I order a pint, I like to assume that someone with good taste and a little integrity has recently given the beer a test drive before serving it to me. Wishful thinking!

At another brewpub proffering its own cask-conditioned ales, I asked for some samples. The nose on one strong ale was so foul I could hardly bring myself to smell it: “Old Outhouse” would be the most appropriate name for that beer. When I told the server that the beer had gone bad, she repeated the dictum that “some people really like it.” I felt like telling her that brewers were once hanged in England for selling such swill. There may truly be no accounting for the taste of one’s customers, but a publican ought to have some taste, too. If he or she is willing to serve bad beer simply to make a profit, perhaps the only standard being faithfully adhered to is actually Standard and Poor’s.

Of course, many alehouses and pubs really do take good care of their beer. One 32-tap establishment that I have often visited is fanatic about keeping its tap lines clean: “We spend $ 250 a month on this,” the owner told me recently. Servers are taught about beer styles and are even educated about how to handle beer glasses. “We show them how to hold the glasses away from the rim that will be touched by the customer’s lips,” he said. If a patron complains about a beer, he or she is never charged for it, even if the bar manager believes nothing is overtly wrong with the brew.

Learning to appreciate beer means learning to take care of it. It does craft breweries and brewpubs no good to handle their beer badly, or to have it handled badly by off-premise retailers. And the customer bears some responsibility too: If something’s wrong with your beer, send it back, just as you would a bad bottle of wine. Establishments that won’t provide you with a decent pint aren’t worthy of your patronage.

At a recent home brewing conference, AHA president Charlie Papazian said he believed that a relatively small number of activist craft-beer people had literally changed the overall brewing industry in the past 20 years. In the same way, maybe a few outspoken beer drinkers can still have their say in it. Beer quality may vary considerably, but it should never be compromised by the establishment that serves it. Let’s demand that our beer be in “tap” condition — fresh and clean, dispensed through clean lines into clean glasses. Breweries and pubs beware: You are what you pour.